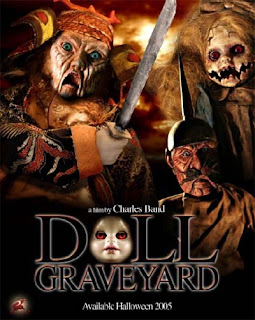 ‘A film by Charles Band’ it says on the front of the sleeve. Were ever five less necessary words included in a piece of DVD packaging? Anyone who can’t work out that something called Doll Graveyard is a Charlie Band movie just isn’t paying attention.

I’m delighted to report that this second release from the latest incarnation of Band’s empire, Wizard Entertainment, is a step up from the rather disappointing and formulaic Decadent Evil. A seven-minute prologue is set in 1911 and already we can see that more time and money has gone into this film. Whereas Decadent Evil simply used footage from a previous movie, 12-year-old Hannah Marks (currently shooting Danika with Marisa Tomei) as Sophia and Ken Lyle (The Missing) as her abusive father have been dressed in suitably Edwardian clothes and there is even a shot of a vintage car parked outside their house.

The DVD sleeve blurb says this prologue takes place in 1905 and that would make sense as the main story is set in the present day, exactly one hundred years later. But the caption identifies the prologue as 1911, presumably because the car is a 1911 model and it was decided that having the dolls resurrected after 94 years was better than having pedantic letters from vintage car enthusiasts. (I’m not an expert on these things myself, but the car is specifically identified and dated in the end credits in the acknowledgement to the company who supplied it.)

Sophia is a lonely girl whose only friends are four large dolls: a baby doll dressed in blue, a German soldier doll with an enormous spike on his pickelhaub, a fierce-looking samurai doll and an African warrior doll wearing nothing except a loincloth and a bone through his nose. When she breaks a vase, her dad loses his rag and, as punishment, forces her to dig a grave in the back yard and throw the dolls into it. When Sophia slips and falls into the grave, breaking her neck, it doesn’t take her father long to work out a way to hide the body. 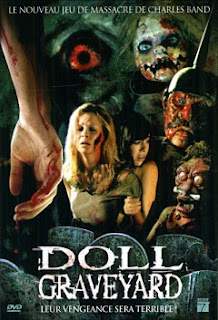 Lyle also plays Mr Fillbrook, single father of high school senior DeeDee (Gabrielle Lynn: Montgomery West and the Wings of Death, To Kill a Mockumentary - who has the most incredibly wide mouth) and freshman Guy (Jared Kusnitz: The Toast), who now live in the house although there is no suggestion that they are related to the earlier owners. When Dad goes out on a date, DeeDee invites over two friends, sensible, cardigan-wearing (but cute) Terri (Anna Alicia Brock: November Grey, Invisible Truth) and blonde slut Olivia (Kristyn Green: the receptionist in David E Kelley’s TV series The Law Firm) who in turn invites a couple of jocks: Tom (Scott Seymour) who is a bit of an arsehole and Rich (Brian Lloyd) who is a complete arsehole. Tom has the mutual hots for DeeDee while Rich hopes to score with Terri because Olivia is “no challenge”. Before joining the girls, they visit Guy in his room at the top of the house and lock him inside with his hands tied.

Earlier, clearing up the yard, Guy discovered a samurai doll which he cleaned up and put on his shelf. Well, of course this thing comes to life (rod puppet animation courtesy of Band regular Chris Bergschneider) and somehow resurrects its three cohorts. The samurai, the German doll and ‘Ooga-booga’ the African doll are already scary enough while the baby doll has cracked its porcelain head across its jaw line, giving it ersatz razor sharp teeth. The reason they want to protect Guy is that he is intermittently possessed by Sophia’s restless spirit.

And so the dolls attack (exactly halfway through the film). There is blood everywhere and there are two fatalities though I won’t spoil this for you by naming names. Terri, who actually thinks Guy is kind of cool and cute, rescues him from his room and works out what is going on (kudos to Kusnitz for repeatedly proclaiming “My name is Sophia” without embarrassment). When Guy and DeeDee’s father returns home, having received an anguished phone call from his daughter, he finds Guy/Sophia in the hallway and the opening scene from the prologue is played out again, Mr Fillbrook somehow channelling Sophia’s father by virtue of having his fob watch. 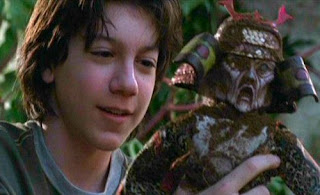 Guy’s eventual overpowerment of the possessing spirit is too simple and could have done with a bit more externalised internal conflict, but the epilogue as the dolls are laid to rest - and the final scare shot - sort of make up for it.

As might be expected, the actual feature runs only about an hour with the rest of the 71-minute running time (the minimum that Blockbuster will accept, I believe) being a three-minute opening credit sequence and seven minutes of end credits. After clips of each actor, the actual end credit roll is so glacially slow that it is still painful to watch at ‘x4’ speed - and there are no clips in or following the credits so there’s no point actually sitting through them unless (a) you’re in them or (b) you’re a very thorough movie reviewer.

Doll Graveyard is great stuff: the violence is suitably bloody and the puppets are suitably creepy, although occasional wordless murmurings from them (sounding vaguely German, Japanese, African and baby-ish) slightly lessen their fear factor. Silent killers are always scarier (and besides, they don’t have respiratory systems so where does the noise come from?). The puppets are stiff with blinking eyes as their only facial movements; Bergschneider’s animation is okay but one doesn’t get the impression of the dolls having different personalities, as one did in movies like Puppet Master.

The script by a pseudonymous Domonic Muir (Critters, Decadent Evil), from a story by Band, clearly defines the believable characters without falling into stereotypes (which makes me feel a little guilty that I characterised Olivia as a ‘blonde slut’ earlier, but what the heck). There is some nice dialogue here too: “It bit me. What if it has rabies?” “It can’t have rabies, it’s not alive.” “But the little fucker moved!” 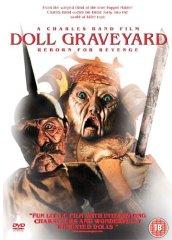 Though the story is set in one house, it doesn’t feel constrained and there is a lovely touch straight after the opening credits when we get a shot of the house with a modern car on the drive, exactly matching the earlier shot of the 1911 vehicle.

The actual production credits of the film are slightly confusing. Back in July, when this movie was in post-production, Charles Band said on his blog: “Speaking of Full Moon – you will probably notice the Full Moon Features logo is back up on our sites and starting with Doll Graveyard it will be on our DVD sleeves too; the reason for this is although Wizard is the new distribution company it seemed wrong not to have our cool Full Moon logo present the movies!”

The credit block for the movie reads ‘Wizard Entertainment in association with Shoot Productions presents...’; the Full Moon and Wizard logos are both printed quite small on the sleeve which has ‘copyright 2005 Wizard Entertainment’ at the bottom. But the on-screen credits are ‘Astonishing Features in association with Shoot Productions presents...’ (with a Full Moon logo right at the start). It’s confusing but, to be honest, quite what the difference is between Full Moon, Wizard and Astonishing isn’t clear and probably doesn’t matter to anyone except obsessive credits-watchers and Charles Band’s accountant. (Shoot Productions is co-producer/casting director Jeremy Gordon’s company.)

Jethro Rothe-Kushel is the other co-producer and, as on Decadent Evil, directed an enjoyable 17-minute Making Of featurette, combining cast and crew interviews with behind-the-scenes footage. Curiously, Gabrielle Lynn is credited in this under her more usual name of Gabrielle Docktor. The DVD also includes 7’50” of bloopers (some of which are mildly funny) and a 3’20” message from Band himself in which he plugs his Full Moon Roadshow tour, due to kick off as this film is released, and his other upcoming titles. There is a plug for Full Moon toys and the Full Moon website, which also plays automatically when the disc loads although one can jump straight to the main menu, and there are seven trailers: this film and Decadent Evil, the forthcoming Gingerdead Man and Petrified, clips compilations When Puppets and Dolls Attack! and Monsters Gone Wild! and a four-minute promo for Band’s six-disc how-to package Cinemaker. 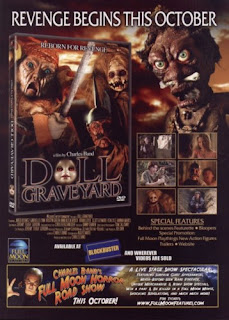 Danny Draven (Hell Asylum etc) once again takes on editing and sound design duties and the cinematographer is the great Tom Calloway whose amazing CV includes Slave Girls from Beyond Infinity, Creepozoids, Slumber Party Massacre II, Critters 3 and 4, Steel and Lace, Project: Metalbeast, Hellraiser IV, Amityville Dollhouse, The Dead Hate the Living, To Kill a Mockumentary and Deep Freeze plus assorted second unit or camera operator work etc on Friday the 13th Part VII, Demonic Toys and others. I love it when people’s CVs look so much like my DVD collection! The (pretty good) music is credited to a band named District 78, apart from the end credits song which is by Charles Band’s son Alex, lead singer with The Calling.

Doll Graveyard is very much a return to form for Charlie Band; it may not be his best film but it’s his best for a while and bodes very well for the hotly awaited Gingerdead Man.