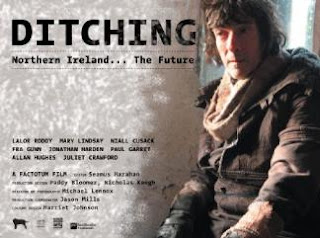 I have just finished watching the new Northern Irish independent science fiction film Ditching and, truth be told, I have no real idea what I have just watched. It was extremely well done but it wasn’t what I expected and I’ve slightly been caught on the back foot.

This is an utterly picaresque post-apocalyptic movie, following a couple as they traipse across the countryside, pushing their possessions in what appears to be a jury-rigged combination of shopping trolley and pram. Along the way they meet various people, some of whom join them on their travels.

And, um, that’s about it as far as narrative goes. But this isn’t a narrative film. Everything about it, from the absence of plot (which is not the same as a lack of plot) to the music to the production design screams ‘art collective’. And indeed, this is the first feature film from a Belfast art collective called Factotum.

Factotum have been going for about a decade and have produced or staged a huge variety of things from choirs to photography exhibitions. Their website proudly proclaims that their 2002 stage production Bog Feature and Dance Jammin was “described by one Arts Council official as his 'worst ever night in the theatre'.” If, like me, you have ever been involved with the arts funding bureaucracy of the UK, you will understand quite how magnificent a claim that is.

Factotum produced a short, non-narrative film called Bottletops back in 2001. More recently they staged an exhibition of posters of unmade or forgotten Northern Irish films which, even in this info-dense, web-savvy day and age managed to divide opinion about whether the movies were genuine or not. Stephen Hackett and Richard West, the guys behind Factotum, assured everyone that the posters - for things like Dafty Wains Go Buck Mental and An Ulster American Folk Park in London - were all historical items produced for genuine projects. But as Factotum have a reputation for straight-faced, pomposity-puncturing spoofery, many doubted the truth of this claim. 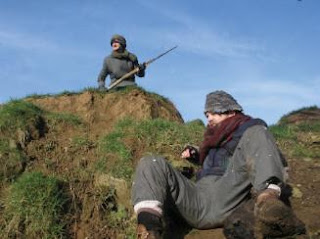 And yet, and yet. If you were to tell people that back in the mid-1990s, there was a Northern Irish feature film about secret paramilitary operations, a state-of-the-art supercar, a cyborg Vietnam vet with a switchable robotic arm and a climactic fight against hordes of the undead summed up on-screen by Saint Patrick himself as “a brilliant zombie battle”, most people would doubt your sanity. But I have seen Enda Hughes’ The Eliminator. I still have the one-sheet poster somewhere with its emphatic claim: ‘Madder than Max, Dirtier than Harry’ (to which, one wag suggested, could have been added ‘And Harder than Dai’!). So if The Eliminator was real, why not Cannibal Begorah or King Billy’s Pink Adventure?

For all Factotum’s japery, Ditching is relatively restrained. In post-apocalyptic cinematic terms, a close comparison might be The Bed Sitting Room, but without the dadaism of that classic work. The wry, never-forced humour of Ditching stems from the characters’ complete acceptance of their world.

This is a future where a plague has wiped away most of humanity’s memories (by, it is suggested, temporarily taking away the power of speech, although that’s not a theory that stands up under close scrutiny). So people remember what things are but not necessarily what they were used for.

No-one is trying to restore civilisation, no-one is particularly bothered about retaining what was left, and everyone has got long past the scavenging-from-looted shops level of immediate self-preservation. There is also, interestingly, no sign of children or pregnancy in this world, although no-one seems to be bothered one way or the other about that. The future of the human race is not a concern.

In all the preceding text, there is one word which sums up Ditching more than all the rest put together and that is ‘traipse’. This is a film where no-one walks, no-one saunters, no-one strolls, no-one marches (although we do see someone running, very briefly). Everyone traipses. Everyone is just resigned to slogging ever onwards towards an indeterminate nothing. They’re not driven by hope - there is no real quest to be completed here, as in the equally picaresque Bleak Future - but nor are they driven by fear or desperation. Nothing pushes them forward and nothing pulls them either. Our protagonists (if such a non-narrative film could be said to have protagonists) travel as much through a very, very slow momentum as anything else. And the people they meet along the way seem to exist in their particular places through a comparable inertia.

There’s a passport office. It’s not clear what role a passport might have in this world although traditional place-names still exist and their is some talk of how the King of Armagh justifies his sovereignty through a closely guarded holy relic which is actual a mutant combination of a duck and a rabbit, melded into a three-dimensional reality of a classic optical illusion.

There are some ‘soldiers’, a self-appointed military grouping in a compound who challenge any travellers that pass. This sequence features a bizarre entertainment/contest in which two men ask each other riddles and then take turns throwing pre-apocalypse items at each other over a sheet. Elsewhere, there are some faceless characters dressed in all-covering, knitted red outfits and an old, crippled guy who collects lightbulbs and powers them using a rowing machine.

None of this really means anything, as far as I can tell, unless you want it to mean something. There is a resigned Irish fatalism to the whole film. If it has a message, the only one I took away from the movie was ‘life is a bit shit, but we might as well get on with it.’ Which seems like a reasonable philosophy.

The sparsity of action and almost complete absence of conflict renders the characters muted and not as interesting as they perhaps should have been. Because nobody ever does anything, or even shows any great interest in doing anything (except traipsing) we don’t really care what they do. 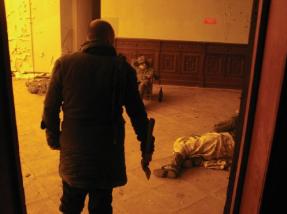 But this is art (or possibly anti-art, maybe quasi-art) and, approached correctly, can be very much enjoyed. The cinematography by Michael Lennox (director of Rip and the Preacher) is good; some scenes are too dark but this is a dark world where only one character owns lightbulbs and even he doesn’t care about them (because, he points out, they’re everywhere). The sound is clear and the accents never problematic except when people mumble. But as people don’t speak much, there is proportionately little mumbling. And the treacle-slow, Beckett-ian pace of the dialogue actually lets you work out what someone has said (if it’s not clear) before anyone else speaks.

The music by David Baxter is great: authentically and defiantly Irish without being all twiddly-twaddly nonsense and yet suitably futuristic to match the dystopia on view. But in fact, this isn’t really a dystopia, is it? It’s certainly not a utopia either though. This could be the first future-set film to take place in a topia. An utterly ambivalent post-civilisation society where humanity continues to exist as one enormous shrug.

But really, what I loved most about the film was the visuals. The costumes are glorious, with most people wrapped up like tramps who have recently been through a charity shop’s bins after a particularly comprehensive, but largely unsaleable, donation of goods. This is a long way away from the leather and studs of Mad Max 2 and yet it makes as much sense, considering the difference between the Australian outback and the damp bogs of Ulster. The final scenes are set in some sort of hospital or convent or something where women wear glorious (but gloriously faded) 19th century-style dresses. Harriet Johnson is credited but it’s not clear whether this is the same Harriet Johnson who has helped out in the costume departments of such lavish productions as Clash of the Titans, The Golden Compass and Disney’s forthcoming John Carter film.

Above all, Ditching boasts probably the most marvellous collection of locations of any independent film I can remember seeing. A series of derelict buildings, ranging from 17th to 20 century in date, all long past their useful life. The Factotum guys obviously know that these found locations are their trump card because the opening titles bring us static shots of one building after another: farmhouses and cottages and warehouses, empty and forgotten, home to only the crows and an occasional horse. Buildings so forgotten that no-one remembered to knock them down even while a civilisation existed which could still operate bulldozers.

Ditching functions as much as a travelogue as a science fiction film, a video journey around a forgotten Ulster that most people outside the province never even knew. We never see a town, we never even see a metalled road. Muddy paths, grass tracks and dry ditches are the thoroughfares of this sparsely distributed society, linking half-hearted attempts to inhabit buildings in various states of disrepair. Every building is a character in its own right, as much as any of the people, and displays the same fatalistic approach to carrying on with existence because there isn’t much else to do. If these buildings could traipse, they would traipse (if they could be bothered to traipse). This is definitely a film where you come out of the cinema whistling the locations. In the small, quirky recent history of UK science fiction films, Ditching stands proudly alongside all the other oddities. It is what it is and it does what it does and, inasmuch as I can fathom what it sets out to do, I believe it achieves that magnificently.