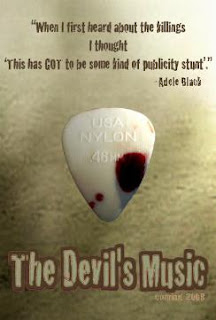 Pat Higgins is one of a relatively small number of directors of whom I can claim to have seen all their films (others would be Andrew Parkinson, Ivan Zuccon, Julian Richards and Steve Balderson). The Devil’s Music is his fourth feature and it’s a distinct step up from the previous three.

TrashHouse had a neat premise and a few good moments but it was desperately over-ambitious and fell apart somewhat towards the end. KillerKiller was much better, a smart, original horror movie ably blending the supernatural and the psychopathic while making the most of its small cast and limited location. HellBride tried to fuse horror with romantic comedy and ended up being a bit of neither really, although the romcom succeeded more than the horror part did.

But with The Devil’s Music, Pat has finally found his perfect form by creating another genre fusion - only this time it’s not a romcom that he has slipped into the mix, it’s a rockumentary. The result is easily his best film ever, the first of the foursome to truly work on almost every level.

The film tells the retrospective tale of Erika Spawn (Victoria Hopkins: Legend of the Alleyman, In Twilight’s Shadow), an American shock-rocker (born Angela Lee) who is based in the UK, drawing the ire of the Daily Mail-reading moral majority with her explicit lyrics and over-the-top stage show. Her band consists of relaxed Scottish drummer ZC, pronounced ‘Zee See’ (Alan Ronald, DP on Pat’s last three films and director of Jesus vs the Messiah, making a rare appearance in front of the screen), over-confidant wannabe femme fatale bassist Adele Black (Jess-Luisa Flynn in her film debut) and a succession of interchangeable guitarists who are always hidden onstage behind a gas-mask. But the lead character here in a way is Erika’s manager Eddie Meachum (Higgins regular Cy Henty) who tells much of the story, his account more credible because he doesn’t have Adele’s arrogance or ZC’s casual attitude. 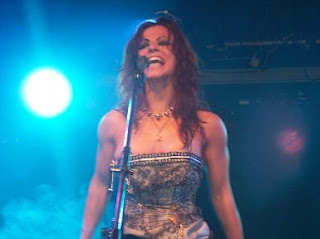 There are various other talking heads including a publicist, a psychologist and the leader of a pro-censorship pressure group. All are thoroughly believable in terms of both character and story but Henty really stands out: Eddie Meachum is as real as you or me and gives a strength to the film, a spine around which everything else is supported. Erika herself is absent from the interviews, as is obsessive superfan Stef Regan (Lucy Dunn, possibly the artist of the same name) who insinuates herself into the entourage.

Stef is given the nominal job of filming the band’s tour for a putative documentary which justifies the presence of a handheld video camera in the scenes of Erika and co back-stage and on their bus. Erika develops a weird relationship with her diminutive teenage admirer, Adele dislikes her from the start, Eddie is wary and ZC doesn’t really care. As well as the video footage, which includes some painfully emotional scenes that can nevertheless be justified as believably filmed, and the interviews, there is some performance footage and some TV clips such as the infamous occasion when Erika pulled a cut-throat razor on an interviewer.

The reason this works so brilliantly is because we really don’t know where it’s going and yet we’re led through the story by interviewees who know the story and talk as if their audience will also know it - as indeed we would if Erika was real. A series of mentions of this and that, almost drip-fed to us, gradually reveal the complex story of Erika Spawn and Stef Regan. Like another great talking head movie, Simon Rumley’s Strong Language, this is a gripping thriller though things are almost never shown to us, merely related to us at one remove.

But this isn’t just about the weird relationship between Erika and Stef and the way it affected those around them. Somehow tied up with all this is a squeaky-clean ex-boy band singer named Robin Harris (Scott Thomas), the diametric opposite to Erika Spawn and apparently unconnected to her.

Compulsively fascinating, the story unfolds and eventually brutal violence starts to rear its ugly head - oh yes, this is a horror film - until finally we’re left with an enigmatic ending that smacks of ... well, black magic to be honest. Certainly it’s difficult to explain everything without resorting to the supernatural - unless it was all one absolutely massive, carefully contrived publicity stunt. 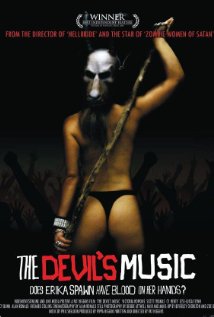 Erika Spawn is a fictional construct created by Angela Lee who gradually becomes the more real of the two while Stef Regan has deep, dark secrets of her own. When people’s lives revolve around so much unreality, reality itself becomes questionable. Despite being entirely fictional, everything in The Devil’s Music is cohesive and credible; Pat has even gone to the trouble of creating a fake website about the band.

The direction and editing are exactly like a genuine documentary and the naturalistic performances, which I assume are semi-improvised, lend total credence to the story, even as it veers towards the fantastic at the end. Though no-one on screen could be described as a normal, ordinary person - realistically, who is involved with rock’n’roll and can still be called ‘normal’ or ‘ordinary’? - nevertheless they come across as real, in both the video footage and the interviews.

If there’s a weakness... well, actually there are two, though neither seriously impairs the film’s effectiveness. The music, written and performed by Phil Sheldon with lyrics by Pat, is okay and sometimes even quite good, but the problem in creating fictional art which is ultra-controversial in the story is that what you present is never going to be anywhere near that extreme. Erika Spawn is no Marilyn Manson, in fact she’s barely Britney Spears, and her songs and performance, on this evidence, would have difficulty in worrying a maiden aunt with a heart condition. There’s not much swearing and none of it’s really loud enough (certainly there should be a lot more crowd noise in the performance footage) but the film is good enough for us to skip over this, just accepting that it all is controversial and offensive in some way.

The other weakness is in the gore which is not really evident at all. If Erika’s stage-show is over-the-top and gruesome - to the extent that when real violence is involved, leading to copious loss of blood, everyone assumes it’s part of the act - we should really get to see some of the gory theatrics. But early on we see footage of a dancer being pretend-stabbed - and we cut away before it happens. Even the real violence alluded to a moment ago (about which I don’t want to give any more clues) isn’t shown. Pat seems shy of giving us gushing quantities of blood, even when the story demands it. 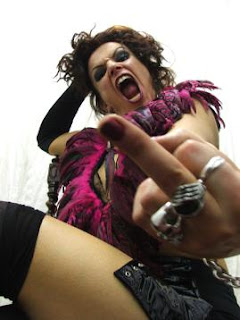 But you know, if you want to listen to Marilyn Manson-style shock-rock, just get yourself a Marilyn Manson DVD. And if you want gore and violence on screen, well the same DVD will suffice, won’t it? What you won’t get, unless you watch this absolutely terrific movie, is a gripping narrative that pulls you into a world of fake horror, gradually becoming indistinguishable from the real thing.

Cy Henty is the only actor to have appeared in all four Jinx Media features: he was Allen in TrashHouse, Rosebrook in KillerKiller and Sinclair in HellBride. Richard Collins, who was James in TrashHouse and Perry in KillerKiller is also in this one, while returning members of the HellBride cast include James Fisher (also in The Zombie Diaries), Eleanor James (also in Forest of the Damned, Martyr and a spoof sci-fi short from the director of The Hellraiser Chronicles) and Rebecca Herod.

The Devil’s Music shows that Pat Higgins has not just made three previous films but has learned from them, producing something really special this time. I know it’s only mid-February, but The Devil’s Music is the best film I’ve seen so far this year. (The film carries a 2007 copyright but the first screeners went out in 2008.)