David DeCoteau has a list of cool credits as long as your arm including Voodoo Academy, Sorority Babes in the Slimeball Bowl-o-rama, Leeches, Totem, Creepozoids, Puppet Master 3, Prehysteria 3, The Brotherhood I, II, III and IV and Frankenstein Reborn!. In August 2006, when he released Beastly Boyz as the first title on his own ‘Rapid Heart Extreme’ DVD label, he kindly submitted to a short e-mail interview. (Two years later, he agreed to another one.)

What was the origin of Beastly Boyz?
“I wanted to make a film that was visually story driven. I also wanted to make something controversial and over the edge in terms of twisted sensuality, bondage imagery and graphic violence. Beastly Boyz came from that desire. It's my most bizarre and provocative movie.”

Where do you go to keep finding all these fit young men for your casts?
“They find me! I judge at talent conventions and work closely with talent agents and managers. They know my movies well and are always suggesting their new clients. I am always looking at new Canadian and EU based actors as I shoot all over the world. I get dozens of pictures submitted to me weekly.”

At what point in the project did you decide/realise that this was something different to your other films?
“Right from the beginning. We shot Beastly Boyz silent and used dialogue as narration only. The script was only 10 pages long and we have a 75 minute movie. The scene description was literally a sentence long per sequence. I had Canadian writer David Grove do it this way so I could feel my way through a scene and use what was available to me on the location. ‘Travis stalks and kills Alan’ was essentially the description I instructed Grove to write based on the detailed treatment I wrote. Grove wrote some fantastic narration which was his most valuable contribution to the piece. He wrote the script in one day.” 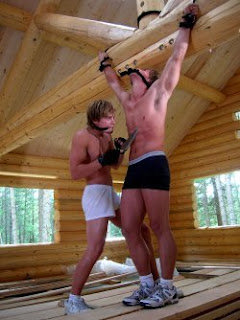 What are the advantages and disadvantages of releasing a film yourself instead of dealing with a distributor?
“Because the film has an exceptionally niche market, unlike the traditional Rapid Heart movies, I thought that I would control the distribution myself and sell directly through the cult DVD specialist online store odditycinema.com. I could release my director's cut unrated and handle the marketing my way. This will allow me to keep direct contact with my fans and devoted customers and make sure they are taken care of in terms of customer service, correct information on the DVD packaging etc. I have personally signed all 5,000 limited edition DVDs myself. I have also priced the DVD at only $12.99. It's region free so anyone worldwide can order it. I have not sold the DVD to Blockbuster, Hollywood/Movie Gallery video shops, Netflix or any chain retailer. The title is available exclusively at rapidheart.com in partnership with odditycinema.com

“Now some indy retailers may purchase the DVD at retail price through our website just like any customer but the title is not available at wholesale prices so you may find it in a store for rent but that’s not the plan for these RHX movies at this point. We may consider wholesaling the movie next year sometime but so far Beastly Boyz is selling so quickly on our site that wholesale is not a priority for us.”

What sort of balance do you plan in your future films between regular Rapid Heart movies and Rapid Heart Extreme?
"Rapid Heart Pictures still produces movies for other companies such as Regent Entertainment, Here! TV and other investment groups but right now RHX is my focus and if the current sales are any barometer for success then RHX should do well.”

What's next for Mr D?
“A few naughty things that I will discuss later. Expect me to shoot on the other side of the pond again and check out my site at rapidheart.com and join the forum to keep abreast of what I'm up to! Free hot pics too!"