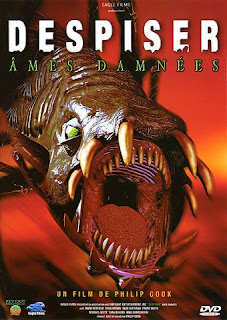 As I write this at the tail-end of 2005, it is still unusual - but no longer extraordinary - to watch a film where everything except for the actors, their costumes and handheld props has been rendered in CGI. Sky Captain and the World of Tomorrow did it and then came Revenge of the Sith and Sin City. Though the effect(s) may still be amazing, the novelty has worn off. The ‘wow’ factor has gone.

So spare a couple of hours, if you can, to watch Despiser, a film which did the same thing in 2002 - and on a budget which would barely have covered Robert Rodriguez’s booze and fags.

Mark Redfield (Dr Jekyll and Mr Hyde, The Death of Poe) stars as struggling artist Gordon Hauge who quits his dead-end graphic design day-job only to find that he is due for eviction and his wife Maggie (Gage Sheridan: Twilight of the Dogs) is leaving him. Driving off to spend the night with his buddy Norman (Mike Diesel), Hauge swerves to avoid two children running across the road, crashes his car - and finds himself in Purgatory, where he teams up with a quartet of rebels fighting the monstrous Despiser and the evil Shadowman.

The team leader is Carl Nimbus (Doug Brown) who was killed in the First World War; Charlie Roadtrap (Tara Bilkins) is a young woman from 1983; Fumie Tomasawa (played by the quarter-Japanese Frank Smith) was a kamikaze pilot in 1945; finally there is Jake Tulley (Michael Weitz) whose background I didn’t catch and whose accent seems to wander between Texas and Australia. All four died, like Hauge, in selfless acts of sacrifice which unfortunately left them halfway between Heaven and Hell. All the other inhabitants of Purgatory seem to be ‘Ragmen’, faceless grunts under the control of the Despiser and Shadowman, who died in despair. Or something. 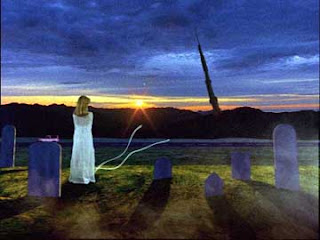 The Despiser himself is a four-armed, reptilian monster, reminiscent of the Kraken from Clash of the Titans. As far as I can gather he is an alien whose spaceship crashed to Earth in 1905 - the Tunguska meteorite - and who is stuck in Purgatory on account of his extraterrestrial origin preventing him from entering Heaven or Hell. Which is a neat idea, you must admit. I’m afraid I couldn’t work out who the Shadowman is, except that he is a sort of henchman of the Despiser - Darth Vader to his Emperor Palpatine - and he can jump into a new human body when the current one gets injured. His eyeballs sometimes turn black, which is very creepy.

The Despiser has a plan to escape from Purgatory by amassing sufficient nuclear weapons to blow the place sky high; Nimbus and his friends are out to stop him, and it looks like Hauge may be some sort of ‘chosen one’ whose destiny is to help them succeed. When Hauge makes another selfless sacrifice in Purgatory he returns to the real world, apparently revived from near-death by Norman.

But the Shadowman is on to Gordon and travels to Earth where he pretends to be a suicide jumper outside the window of Maggie’s mother’s apartment. When Maggie goes out onto the ledge to talk to the man, he grabs her and jumps, taking her soul to Purgatory with him. Gordon then has to crash his car again in order to return, where he sees a vision of Maggie and meets up again with Nimbus and his team. Together, they set out to defeat the Despiser and earn their way out of Purgatory. 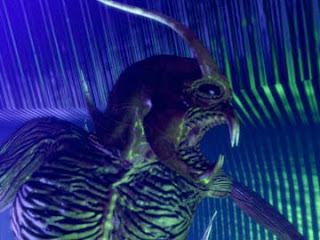 To be honest, the story of Despiser is confusing and the script definitely needed a good polishing by a script editor. Even allowing for the suspension of disbelief in Purgatory - there is no indication of where the cars come from, or the fuel to drive them, and hand grenades cause great balls of fire instead of bursts of shrapnel - there are still numerous things which don’t seem to make sense. For example, when Gordon drives off from Norman’s house, a plastic troll hanging from the rear-view mirror starts chanting “You’re gonna die!” - and I have no idea why.

But the story is not the achievement here, and the script to be fair does a good job of characterisation. What is impressive is the production itself. Scenes were filmed against simple painted flats designed to look like brick or stone - or just against a blue screen - and then matted into an entirely computer-generated world, allowing for some extraordinary ‘camera moves’. A good example is a single unbroken shot which pulls back from a close-up of the driver of a car to a long-shot of two vehicles before zooming into a close-up of the driver of the other car. Purgatory has a lot of roads and a number of built-up areas, but the Despiser himself lives in a massive castle on an island. Even some of the scenes in the real world are computer-generated, such as outside shots of Maggie’s mother’s apartment block.

This is all the work of two men: writer/director/producer Philip Cook and Cory Collins. Because of the low budget and limited computer power, some of the scenes do look like a video game but there are plenty of others which are simply amazing and more than a few where it is impossible to tell where ‘reality’ ends and the computer animation begins. Despiser makes up for its failings in the story department by being a technical achievement rarely seen in the world of independent productions. 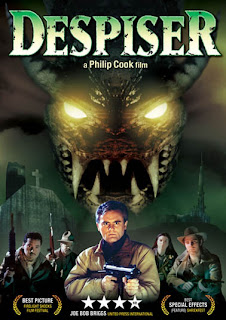 The film is almost a one-man show for Cook who gets more credits than I have ever seen one person have on any film: scriptwriter, director, producer, film editor, director of photography, visual effects designer, visual effects director, art director, member of the set construction crew, voice of the Despiser, voice of the troll - and he played somebody called Captain Jack though I’m not sure who that was. In addition, Cook’s wife Helen was costume designer, one of three people credited with costume construction, also on the set construction crew, inhabited one of the Ragman costumes and also played a nurse. And the two little girls that Hauge swerves to avoid are Alexandra and Roxanne Cook.

This isn’t vanity, it’s an indication of how a small crew was able to put together this hugely impressive film. Other names crop up repeatedly in the credits: Cory Collins gets ‘director of character animation’ and ‘creatures designed by;’ Richard Dorton (who plays ‘Shadowman #2’ and does motion capture work for video games) shares the ‘special make-up effects’ credit with Mark Redfield and the ‘stunt co-ordinator’ credit with Dan Poole (who plays ‘Shadowman #1’; he wrote, directed and starred in the notorious early 1990s unofficial Spider-Man short The Green Goblin’s Last Stand). ‘Shadowman #3’ is Mark Hyde, who was also sound recordist and ‘combat technical advisor’.

Alpha’s typically good value DVD includes a 15-minute Making Of, a director’s commentary, an extensive selection of designs, stills and publicity material (some of which carry the original title of The Road) and a trailer which credits Mike Diesel under his real name of Mike Cuccherini. There is an ‘animated storyboard’ for one scene, a few bloopers and a couple of extra scenes; one of these, in which Gordon and Norman tell their pal Ben about their time together on the crew of a nuclear sub should really have been included in the film. It not only illuminates their friendship, it also explains why Gordon shows such detailed knowledge of nuclear missile technology at the film’s climax, as his naval service is otherwise unmentioned.

This is not Philip Cook’s first feature - he also directed Invader in 1992 and Star Quest/Beyond the Rising Moon way back in 1987. Three films in 18 years make him less prolific than Kubrick but he has obviously made the choice to make his films the way that he wants to, when he wants - or rather when he is able to. And that’s pretty laudable when some directors seem to make a new film every weekend.

Despiser doesn’t always work but that’s because it is hugely ambitious, possibly over-ambitious. When it does work, it’s just extraordinary, a quite unique piece of independent cinema which is much more than just the effects show-reel that it could have been. There are elements of The Wizard of Oz in the story and obviously a certain amount of religious iconography, though this is not a preachy, evangelist fantasy. The cast are all very good, especially Brown as Nimbus, who really holds the film together, while Redfield hits just the right balance between confusion and determination in his portrayal of Hauge.

Despiser (which is called Philip Cook's Despiser on the DVD menu) is a labour of love but it’s far from self-indulgent. It’s proof that with current technology (current? - this was made three years ago!), nothing is beyond the reach of a dedicated, hard-working, imaginative independent film-maker.