Robert Louis Stevenson’s 1896 novella The Strange Case of Dr Jekyll and Mr Hyde is probably the most filmed of all the classic horror tales (there were about 20 silent versions!) yet nobody has ever thought to actually film the book as Stevenson wrote it. The original work is not the sad tale of Jekyll’s gradual descent into the dark side but is a mystery, with Utterson (lawyer) and Lanyon (doctor) attempting to discover who the mysterious Edward Hyde is and what sort of hold he has over their friend Henry Jekyll.

Mark Redfield’s superb film (shot in 2001 but delayed because of post-WTC problems) is the first attempt to follow the plot of the book - and a successful attempt without a doubt. Redfield has added a few new scenes and minor characters for storytelling purposes but to all intents and purposes the first 80 minutes of this movie is Stevenson’s novella. The final half-hour is Redfield’s own invention, and it is entirely to his credit that the transition is smooth and seamless, and his ending is entirely consistent with the RLS tale.

Shot on a low budget in Baltimore, the film betrays its origins in Redfield’s stage adaptation but uses its limitations well, with a few classical sets and green-screen work used for most exteriors. The mostly American cast are excellent, with most of the accents believable (certainly none stray into Keanu Reeves territory!) but special mention must be made of Redfield’s own performances as both Jekyll and Hyde. Looking superb in both halves of the role - thanks to the outstanding work of costume designers Suzanne Griver and Margo Harvey and make-up artist Robert Yoho - Redfield is suave and debonair as Jekyll, sinister and scary as Hyde. As the latter he sports contact lenses that make his pupils look contacted and a hideous grin which raises his cheekbones; this Hyde certainly owes more to the John Barrymore’s creepy low-life than Fredric March’s hairy beast-man. 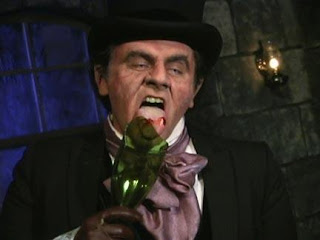 Along the way, Redfield works in a Jack the Ripper connection, a reference to Conan Doyle, and a cameo appearance by the Brothers Lumiere(!). The ending is tense and disturbing and, having departed from Stevenson’s work, a shock to the whole audience. The production as a whole is thoroughly professional and the film proves that new life can be breathed into even the hoariest old story. Unreservedly recommended.

Email ThisBlogThis!Share to TwitterShare to FacebookShare to Pinterest
Labels: 2002, Jack the Ripper, Jekyll and Hyde, USA