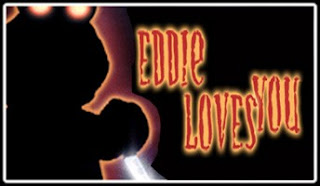 For the past few years I have been a judge in the amateur film competition - the Delta Film Award - at the annual Festival of Fantastic Films. The quality of the entries gets better every year and most of them are professional in quality, if not in budget. In 2006, from a particularly strong field, the aggregate marks of the judges decreed that the award went to Karl Holt’s 25-minute horror comedy Eddie Loves You.

The premise is brilliantly simple: a man terrorised by a cuddly toy. Sorting out his old toys, our nameless hero finds that one of them, Eddie, has ripped and is losing stuffing. So he is consigned to the bin. But somebody brings the toy back in the middle of the night.

Eddie is a toy that our hero cannot dispose of, however hard he tries. And Eddie is not only annoyed at this treatment, he is also jealous of the comparative care bestowed on all the other toys. He will have his revenge.

And all the while, his voicebox keeps squealing: “Eddie loves yooo! Cuddle Eddie!”

Karl Holt’s film really does have everything. It is a cracking script which builds gradually, mining each level of action for both horror and humour before upping the ante. There are plenty of moments spoofing iconic horror movies, including Halloween, The Fog and a lengthy lampoon of The Exorcist (which introduces the film’s only other human character). But these are comedy spikes in an already fabulous gagfest, not the be-all and end-all of the film.

The central performance - by one-man band Holt - is perfectly observed and played completely straight. The special effects, though cheap, are surprisingly effective. The music (which adds to some of the spoofs) is great and the DV photography is very impressive.

If one wants to be picky, it’s maybe a tad too long, especially in the Exorcist sequence, but that’s about the only fault that I could spot. Having said that, there is probably scope to remake this as a feature because there are surely other gags to be mined if a slightly more complex story was built around the central conceit.

What distinguishes Eddie Loves You from most ‘killer doll’ films is simply that Eddie is cute. Most deadly puppets look scary: think of Chucky, the casts of Puppet Master and Demonic Toys, the ventriloquist dolls in Magic and Dead of Night. Creepy, creep, creepy, even before they start to move by themselves. Eddie, on the other hand, is played by ... a Tickle Me Elmo. It takes only a very few moments to accept that the toy is Eddie and not Elmo, although this would of course need to be changed in any more professional remake. You would want an original puppet, not only to avoid the litigious wrath of the Henson Corporation (they might send round Big Bird!) but also so that you could merchandise the little fellow yourself.

Eddie Loves You had its premiere at the Portobello Film Festival in August 2006 where it won Best Cinematography. Two weeks later, it took home the Delta Award at the Festival of Fantastic Films. In October it is lined up for Shockerfest and for the Chicago Horror Film Festival (where it is nominated for three awards). Holt’s massively entertaining film is a surefire crowd-pleaser which I expect to crop up at many more festivals, and win plenty of other awards.