As I live in Leicester and Norman England lives in Tokyo, we naturally first met halfway inbetween - in LA. It was at a Godzilla convention and, knowing each other’s work for Fangoria, we hit it off and have stayed in touch since. In 2006, Norman sent me a copy of his first film, the charming sci-fi fantasy/comedy The iDol. Naturally, I wasn’t going to let him get away without one of my notorious six-question mini-interviews, and Norman came up with some great answers.

What made you, after all these years of interviewing film-makers, decide to make a film yourself?
“This was my goal from the start of my set visiting days. Like many who grew up on a healthy diet of TV and cinema, I’ve a desire to make film. But, as you know, there aren’t help wanted ads in the paper reading, ‘Wanted: director/creator to helm blockbuster picture.’ It’s a closed-off world with no clearly defined point of entry. When I started writing, which was just a way to express my love of film and hone my ability to put words together coherently, I began to see that my press credentials were a kind of pass into the film world and that I’d be a fool not to make something of it. Once allowed access, I made it my business to learn all I could about the film-making process.”

Apart from the obvious, how does a Japanese film script differ from a western one, and how easy was it for you to produce a workable script?
“In many ways they are similar. You know, dialogue, scene descriptions, the one-page-equals-one-minute thing. But they run in traditional Japanese style, which is top-to-bottom text and read left-to-right. There’s also a lot of space at the top for note taking, which I like.

“Making the script for The iDol from my English original was a real endeavour. I worked on the Japanese version with Jiro Kaneko, who I met in 2000 on a trip to Tokyo before I moved to the city. Jiro translated it in sections, with me checking his translation and making suggestions. My Japanese is adequate, but I don’t consider myself qualified to write in it. In any case, if I felt he missed a nuance we would talk about it and would try to find the closest equivalent in Japanese.

“It took two years and we wrote the script twice from top to bottom. The first time we thought to translate the English dialogue literally, sort of what Charles Dickens did with French expressions in A Tale of Two Cities. Well, that didn’t work out so well. The response from people was that it came across like subtitles. So, we abandoned that approach and wrote the dialogue from a purely Japanese point of view. That’s the interesting thing about languages; there is no best one. In some cases the English was sharper and in others Japanese was better suited. 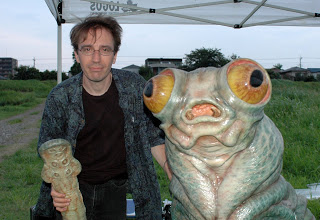 “To complicate matters, director Takashi Yamazaki gave it a full rewrite. This was a bit of a dilemma. I respect Yamazaki a lot and was honoured that he took the time to do this, especially since he was in the midst of Always: San chome no yuhi. At this point, I had two scripts that started the same and ended the same, but sort of zigzagged around similar plot points. It was kind of a mess and I didn’t know which way to turn. I solved things by making a flow chart of both versions to see where they intersected and where they diverged. I then chose the elements I liked best. In the end, I stayed with much of my original intent, but I did use a few of Yamazaki’s points. Ironically, I kept the photographer in the park, which was his idea and which he wound up playing. When we were shooting this scene I said to him, ‘I think you created this part just have a role in the film!’”

One hour is actually an odd length for a modern film - not quite a feature but too long to be a short. Why did you make the film this length?
“I’m the first to admit that the length works against the film in terms of selling it. However, I feel that this is a prejudice imposed by US studios and TV. In the ’20s and ’30s, films were of lengths close to this. Even in the ’50s, a lot of great sci-fi clocks in under 70 minutes. I thought about adding ten minutes or so, but in the end, I felt that it would just stretch things out too much and hurt the film. Actually, the character development is closer to that of a short film, with no superfluous scenes present to add meat to their spine. I thought about doing this, but the reality was that I didn’t have the money to add extra days to the shoot. Also, the film is more a fable than a character study.”

What response has the film received from critics, audiences and industry people?
“So far, the response has been very good. Better than I hoped, with the first showing at Fantasia exceeding my wildest dreams. Although Fantasia is comprised of people who love films that dare to be different, they really showed an enthusiasm beyond anything I anticipated.

“I’m now working on getting it seen at other film events and a limited theatre run in Tokyo. I’m meeting with people and they all seem happy with the film despite the limitations forced on the film because of the low budget. 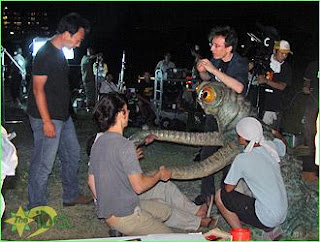 “This is not to say that everyone loves the film. I’ve had people say they don’t get it and find it confusing. Honestly, this doesn’t bother me. It’s kind of a strange piece of film. However, enough people have given it thumbs up that I know there is an audience for it. Besides, if your goal is to have your work loved by all and you can’t accept that fact that someone won’t respond in the way you would like, then I suggest you don’t involve yourself in the arts. I mean, I meet people who tell me they hate The Beatles. My feeling is that if someone can hate something as obviously genius level as The Beatles, then how can I expect to fair better?”

What did you learn while making The iDol that you wish you had known beforehand?
“That I should trust my instincts more. As a first time director a lot of people thought they had to watch my back. Not to say that I had people working against me, just that as a director you are supposed to be holding the cards and some people were nervous about this. But this is just the way it is for every first time director. No one trusts you because you have nothing to show. It’s not an enviable position to be in, but if you want to make a film it’s something you have to go through. Shortly after I wrapped The iDol I was on the set of God’s Left Hand, Devil’s Right Hand and director Shusuke Kaneko laughed after hearing some of my stories and said, ‘I went through the exact same thing on my first film. And I deserved it too because I was probably the worst director back then.’

“But the most important lesson I learned is that no matter what you think, the reality of heading a set is something you can’t fully fathom until you are actually in the position of director. Many fans like to nitpick and say they would do this and that if they had been the director. Well, maybe this is so, but there are so many things a director has to deal with that you just might find your brilliant fix lost under the weight of a thousand other decisions.”

What plans or ideas do you have for future films?
“I’m doing a variety of film related things and am in the process of incorporating my company, iD iMages. I have a small staff and a large network of filmmakers and contacts at studios in both Japan and the US, as well as DVD companies on both sides of the globe. Of course my real goal is to continue to make films. I have just finished my next script and think it is something that has never been attempted in Japan before. Already I have gotten commitments from some major filmmakers and studios who like the story, see what I am attempting and want to be involved. As I am still in the pre-preproduction phase, I can’t really talk about it in detail. I will say that it is once again science fiction, but not of the type you normally see out of Asia. 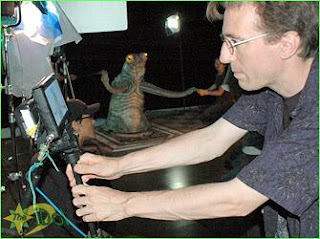 “The motion picture and the industry surrounding it are very much at a crossroads point, and this especially true in Japan. Japanese horror is running out of steam, there is no really innovative anime coming out, and Japanese romance and family TV dramas wallow in sentimental hogwash or rely on absurd gimmicks and star appeal. The Internet has everyone scared too. Nearly everyone in Japan is connected with 100mbs optic fibre connections. These are interesting times, and I believe these so-called problems will get worked out through a combination of technical innovation and old-fashioned talent. And my plans are to be there making the kind of films I love.”