Earth vs The Spider

You can’t really go wrong with a giant spider movie. From Tarantula to Eight-Legged Freaks via Spiders and, um, Spiders 2, big things with eight jointed legs are a horror staple.

In this AIP production, high school students Mike (Gene Persson, later a Broadway producer!) and Carol (June Kenney: The Viking Women and the Sea Serpent, Attack of the Puppet People) go looking for her father when he doesn’t return home from a business trip; they find his crashed car on a deserted highway near a length of strange, sticky ‘rope’ and wonder if he sought shelter in a nearby cave. Inside they find various skeletons, Carol’s dead father - and a giant spider, about fifty feet across. (Persson and Kenney were paired again three years later in Bloodlust.)

The sceptical sheriff (Gene Roth: a staple of serials whose credits go back to the 1923 Hunchback of Notre Dame and who played another sheriff-threatened-by-oversize-invertebrates the following year in Attack of the Giant Leeches) nevertheless rounds up a posse who investigate the cave, confront the spider and kill it with vast amounts of DDT. Mike and Carol’s science teacher Mr Kingman (Ed Kemmer: Giant from the Unknown) realises that such a unique specimen deserves study and the arachnid's carcass is transported (somehow!) back to town and stored in - where else? - the school hall.

The prom is imminent so a truly lame seven-piece rock and roll band (featuring comedy ‘fat bass player’ Skip Young from The Adventures of Ozzie and Harriet) get past school janitor Hugo (Hank Patterson, also in Tarantula) and start rehearsing on stage, and the passing drama club just have to cut a rug to the happening sounds, man. At which point the spider wakes up and goes on the rampage!

The longer title of this film, Earth vs the Spider, is used on the print and on the disc itself although the sleeve just calls it The Spider. Of course Earth doesn’t come into it as all the action is restricted to the little town of River Falls, where the local cinema (managed by Mike’s dad) is showing two other AIP movies: War of the Colossal Beast and Attack of the Puppet People (which also has Hank Patterson as a janitor) - a little bit of canny cross-promotion there. Among those specifically targeted by the monster, in the way of these things, is Kingman’s wife (Sally Fraser: War of the Colossal Beast, It Conquered the World). 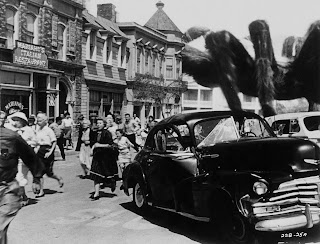 The spider returns to its cave and the entrance is dynamited to keep it in there. Mickey Finn is astoundingly wooden as construction foreman Haskel who oversees the operation and one can see why most of his characters (in movies like Robin and the Seven Hoods and Taras Bulba) had no names. But wait, it’s not that simple. Mike and Carol were in the cave looking for a dropped brooch, so now the Sheriff, their parents, Kingman and the rest of them have to dig down into the cave to (a) rescue the kids and (b) kill the spider once and for all using mains electricity.

Giant things (or giant people) was a speciality of Bert I Gordon, whose apposite initials have oft been commented upon. In Beginning of the End he famously created the effect of giant locusts scrambling up a skyscraper by having normal-size locusts walk on a photograph, and the same technique is evident here, though not obviously so. A tarantula portrays the titular menace - though it does seem to change species a few times. However, this is combined with some decent matte work to surprisingly reasonable effect (sometimes the spider is matted in, sometimes the people). On the other hand, the use of photographic mattes to give foreground detail to the cave scenes results in geological features of a two-dimensionality unseen since the days of Georges Melies. When required to interact directly, there is a large prop spider leg which is waved from off-screen.

Cinematographer Jack Marta shot scores of westerns as well as SOS Tidal Wave and the 1960s Batman TV series while screenwriter Laszlo Gorog (The Mole People, The Land Unknown) was - here’s trivia for you! - the grandfather of the actor who provides the voice of Commander Nebula in Buzz Lightyear of Star Command! And watch out for a copy of Famous Monsters of Filmland in one scene.

The Spider is one of the first releases from DVD Ltd’s ‘Arkoff Film Library’ and is a nice, crisp print though full-screen. Like all the other titles in the initial batch, it includes a 50-minute audio recording of Arkoff interviewed at the NFT plus trailers for nine AIP flicks: War of the Clossal Beast, Voodoo Woman, Blood of Dracula, Day the World Ended, The Brain Eaters, How to Make a Monster, The She-Creature, The Undead and this film. The trailer uses the on-screen title The Spider and is in much worse shape than the film, not only very scratchy but so dark that little can be seen in places. Also included is a set of nine postcards reproducing the posters of all nine films, which form the basis for the sleeve artwork of the respective titles. (The NFT interview is a good, clear recording and plays over a repeated gallery of five photos of Arkoff on stage.)

For fans of 1950s B-movies, this is a smashing release of an archetypal movie in a very attractive version - and at a bargaintastic price of only a tenner. The Spider is a not a great film by any stretch of the imagination but it’s a great example of its type of film. DVD Ltd have the rights to 35 Arkoff titles and if they all look this good it’s going to cost me 350 quid!

But what really endeared me to this film is the revelation, about fifty minutes in, that Mike’s surname is Simpson - I have a movie namesake!

MJS rating: B+
review originally posted before November 2004
Posted by MJ Simpson at 11:21