As Head of Film Programming at the National Museum of Photography, Film and Television in Bradford, Tony Earnshaw knows a thing or two about movies. His most recent book is the excellent Beating the Devil: The Making of Night of the Demon and he also produced the short film Leatherface Speaks. In June 2005 he kindly agreed to answer a few questions on both topics.

What was the intention behind making this simple but effective mini-documentary?
“I have to admit to little pre-planning in terms of filming Gunnar Hansen. In conversation prior to the shoot he had proved himself to be an exceedingly bright, erudite and considered interviewee, so Jim Moran and I grabbed an opportunity to shoot a Q&A 'on the hoof'. Gunnar agreed, we set up a single camera (hence me being heard but not seen) and filmed for about half an hour while cinema-goers gathered in the background to see the film. Consequently there is much ambient noise - doors banging, people talking, spoons tinkling in teacups - while Gunnar runs through the history of The Texas Chainsaw Massacre. It was hardly an ideal situation but we had to make the best of it. I was, however, delighted with the thoughtful nature of Gunnar's answers and the fact that he was utterly unaffected by his 'fame'. He was, as you recognised, a wonderful, sweet bear of a guy.”

What has happened to the David Hess interview that you shot?
“The David Hess footage remains unedited. It was a very ad hoc interview with David and the interviewer (not me) simply standing by a wall, deep in conversation. It's unstructured and a little too rough to make a viable film, I suspect.”

Do you have any plans to film any more of these interviews?
“We have done other films, all feature-length projects taken from formal on-stage interviews here at the Museum. Subjects include Richard Attenborough, Jean Simmons and Mike Hodges. Jenny Agutter is the next one up. We film all of our events so we have footage of people like Robin (The Wicker Man) Hardy, Roy Ward Baker (of The Vampire Lovers and Quatermass and the Pit), Julian Richards (Darklands; The Last Horror Movie) and Ray Harryhausen.” 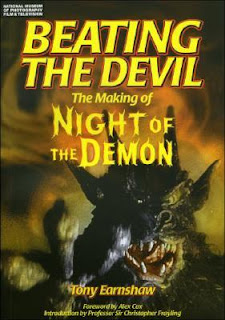 Why did you pick Night of the Demon to write a book about?
“Night of the Demon picked me - just like a runic parchment landing on my doormat. I was with my wife in London when I realised I was walking past one of the film's locations. I knew no-one had ever covered it in detail, began contacting members of the cast and crew, and it took off from there. What was envisaged as a pamphlet metamorphosed into a full-blown book. In the event it launched the Museum's film imprint in conjunction with Tomahawk Press. All by accident, really.”

Of which section/aspect of the book are you proudest?
“I liked pricking the bubble of the pompous censors. Their attitude in the 1950s was appalling. It's all there, in detail.”

What are your plans for your next book?
“I'm heading up to Scotland in early July to lock myself away and try and get some words down on The Wicker Man - The Making and Mutilation of a British Film Classic. I've been working on it since 1999 but had to put it on ice when another (rival) book came out. I'm now in a position to pick up the threads and get moving again. I hope to have it done by next year - famous last words!”