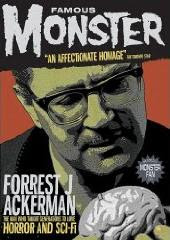 Famous Monster: Forrest J Ackerman (to use the full title) is a 48-minute look at the life and work of ‘Mr Sci-Fi’ himself, produced a couple of years before his death in 2009. It features most of the expected talking heads, some rare photos, lots of clips from trailers and PD classics and some newly shot interview footage with Forry himself who looks very weak and frail but clearly still had all his faculties.

Forry had a stock of anecdotes and well-worn gags which he trotted out in interview after interview, column after column, especially in the last decade or two of his life, so it would be very easy for this to turn into a singalongaforry as anyone with even a passing knowledge of the man mouths the stories word for word. It is to the credit of director Michael MacDonald and writer Ian Johnston (who share a curious ‘created by’ credit) that Famous Monster manages to largely avoid this, without leaving any obvious gaps in the story. There is the occasional “little boy, take me home” or “I am your reader, make me laugh” but they provide texture, not tedium, to the story.

There are also clips of Ackerman’s cameo roles in Ray’s Scalps and Melchior’s The Time Travellers as well as some archive footage shot inside the original Ackermansion. Forry sits in an armchair in the mini-Ackermansion that he moved into in his later years and is also seen at his favourite restaurant, House of Pies.

Forry looks very small and old in this film - he was 89/90 when it was produced - and his movements are small and slow. But he looks content, thankful for his (amazing) lot in life and comfortable in the knowledge that he is surrounded by friends who will care for him until Prince Sirki finally comes a-knocking. “He’ll probably outlast us all,” says Sullivan, which of course turned out not be true. “When he finally goes, he’s going to go happy,” ventures Dante, which thankfully did prove prophetic. 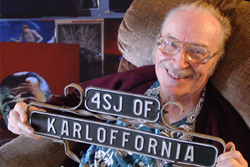 Although it was produced and broadcast on American and Canadian TV while Ackerman was still alive, the first DVD release of the documentary was this UK disc which hit stores a couple of months after his passing. There is a curious but, I suppose, unavoidable inconsistency in that some of the interviewees talk about Ackerman in the past tense but we can work out that they are talking about Forry as he was when he was still active; he was still with us when these people spoke.

Johnston’s script (narrated by Terry Pulliam) largely avoids any attempt to ape Forry’s punning style and acknowledges the controversy over the reincarnation of Famous Monsters without dwelling unduly on the matter or naming the other party involved. Johnston is also credited with ‘research’ and ‘interviews’ while MacDonald (who had previously interviewed Forry for his 2005 documentary Visions from the Edge: The Art of Science Fiction) shares camera credit with (brother?) Fred MacDonald and editing with James Patriquin. Warren Robert, sometime guitarist with rockers Avacost, provided the score.

Famous Monster strikes just the right balance so that it will appeal to both those who know little about Forrest J Ackerman and those who are completely familiar with the man and his legacy. Although there is, naturally, no reference to his passing, this serves as a generous, affectionate (but not cloying or hagiographic) tribute to a man who, directly or indirectly, touched the lives of millions of people around the world.

The DVD from Spirit Entertainment includes nearly two hours of extras plus a commentary by Johnston and MacDonald which starts fairly blandly but picks up later on. There is a three-minute ‘Blooper Reel’ which has out-takes from the interviews with Landis, Schow, Dante, Roebuck and Corman. Landis observes that there is no irony in Dan Aykroyd’s belief in UFOs, ghosts and conspiracy theories and that the actor really is “insane”. Corman can’t recall which of his films Forry cameoed in but, when told the details of one such appearance, then repeats them for the camera as if the information was plucked from the air. (Film journo secret: this sort of thing happens all the time.) 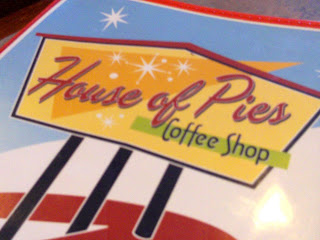 ‘More Forry Memories’ is 27 minutes of additional interview footage, 17 minutes of which is Ackerman himself although this includes a rather pointless sequence in a car during which Forry barely says a word and a House of Pies sequence of Forry singing three songs, which is the sort of indulgence one extends to people of that age (and Forry always loved to sing to people) but is of little actual interest. The remaining ten minutes includes additional interview material with Dante, Bradbury, Roebuck, Sullivan, Spiegel and Landis.

On the commentary track, Johnston and MacDonald explain that they visited a convention where Forry was scheduled to appear but he didn’t show up. Since they were there anyway they grabbed three interviews with other guests but these have been omitted from the main documentary for two obvious reasons. One is sound quality - all three interviews were done on the fly in a noisy dealer’s hall - and the other is that none of the interviewees have anything to say about Ackerman except what a lovely man. Carla Laemmle (niece of the Universal Studios boss, now well into her 90s) is one of the ladies in question and the other two are Grace Lee Whitney (Star Trek’s Yeoman Rand) and Hammer/Bond hottie Caroline Munro. The fourth deleted interview is with a young, aspiring make-up effects artist, Casey Wong, who is seen in his studio and in Forry’s home. This whole ‘Deleted Interviews’ segment runs 22 minutes.

A seven-minute tour of the Mini-Ackermansion is really just long, unedited takes of establishing footage but it gives us a chance to view what remained of Forry’s collection after the great sell-off. On the other hand, ‘Dan Roebuck’s Hall of Horror’ (called ‘Dan Roebuck’s Living(??) Room’ on-screen) is a guided tour around the extensive collection of this likeable actor who turns out to be a massive, massive monster kid. Roebuck, whose many credits include episodes of Lost, Six Feet Under, Freakylinks, The West Wing, Lois and Clark and Star Trek TNG, explains that, unlike Forry, he has very few original items (a couple of Planet of the Apes costumes notwithstanding) but he has vast amounts of toys, action figures, books and other merchandise plus a number of lifesize waxworks, some bought from out-of-business museums and some specially commissioned. Finally there is a gallery of 37 photos of Forry or from his collection, some of which are seen briefly in the main feature. 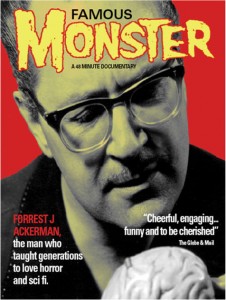 One day someone may write a definitive biography of Forrest J Ackerman (whose middle name, I learned from this film, was actually Clark). I certainly won’t, but somebody might. It will be a difficult job, even at a remove of several years, because Forry was human and could, I have no doubt, be as cantankerous as any old man. But he is so loved, and is likely to remain so, that objectivity will be difficult and may well end up being condemned - which is one reason why I wouldn’t touch such a job with a barge pole, thank you very much.

In the meantime, this sympathetic, informative, well-crafted documentary serves as a fine record of a person whose historical importance and cultural influence were out of all proportion to his actual level of public awareness.