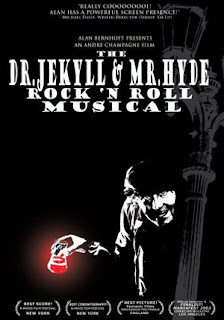 I watch a lot of movies which the average filmgoer would dismiss out of hand as ‘bad’ and I usually find something enjoyable in them, but occasionally I come across a film which is so inexcusably atrocious on every conceivable level that it leaves me alternately slack-jawed with amazement and helpless with laughter. One such is The Dr Jekyll and Mr Hyde Rock n Roll Musical, an utterly inept, entirely humourless, totally self-indulgent vanity project the title of which is, astoundingly, not the worst thing about it.

The bad book, bad music and bad lyrics of this garbage are by Alan Bernhoft who also stars in the dual lead role, despite having neither leading man good looks nor a remarkable voice. (In fact, although the entire cast can sing, none of them have a voice which is anything other than average.) Nor, it must be said, does Bernhoft display the slightest element of acting ability, wandering woodenly through proceedings with a blank expression on his slightly pudgy face. Bernhoft and Andre Champagne produced this sorry mess, alongside screenplay co-writer Robert Ricucci (who plays a non-butler character named Poole and has a song in the gym). Champagne was also director and cinematographer and produced the (pre-film) album on which Bernhoft played all instruments and sang all the male parts.

The story is a greatly simplified version of the familiar Jekyll and Hyde tale but set in present day LA, despite a prologue showing Robert Louis Stevenson writing the story at his home in Bournemouth. Some idea of how amateurish this whole project is can be gained from the use of a clearly American timberboard house and a caption which reads ‘Bournesmouth, England’! The film’s ‘plot’ is progressed largely through songs with tunes which plumb previously unexplored levels of blandness, and lyrics that display not one iota of wit or wordplay. Characters simply sing who they are and what they’re doing in the most prosaic terms imaginable.

Watching this garbage, one cannot help thinking of the musical version of The Elephant Man seen briefly in The Tall Guy or Spinal Tap’s aborted Jack the Ripper musical (“Saucy Jack, you’re a naughty one...”) - or even Springtime for Hitler. But if TDJAMHRNRM is also a spoof of bad musicals, there is nothing to indicate such - it appears to genuinely be a (very) bad musical. Among the more tasteless numbers is Hyde’s appearance in a bar (called The Baked Potato) where he grabs the mike and sings, with the rock band on stage, a song about how he loves “little girls” including references to sitting on Daddy’s knee and offering candy - all the while groping a hooker in a leather bra. Jesus!

Then, just as one imagines this pile of crap can get no worse, Hyde takes the hooker back to his apartment where they can be alone - apart from the film crew member clearly visible in the corner of the room!

This is a terrible film of a really terrible musical. Other lowlights include: a detective who does absolutely nothing; a character whose front room is full of U-matic video tapes for some reason (the reason being that Bernhoft and Champagne apparently shot the film in their own homes); a dream sequence when Jekyll imagines himself in Victorian London for no apparent reason, the effect being achieved by green-screening him onto still photographs of landmarks!; and the way that every scene fades to black like the end of a pop video.

The Dr Jekyll and Mr Hyde Rock'n'Roll Musical is far and away the worst film I have seen for many years, and almost certainly the worst musical ever made. It also has a really badly designed website which scarily reveals that Bernhoft has written five other musicals and 2,400 songs! Christ on a bike!