Sir Alvin D Ecarma, director of the hugely enjoyable Lethal Force, kindly agreed to a mini-interview in June 2007. The Divergent Thinking website says that this is a photo of Sir Alvin - and who am I to argue?

What was the inspiration for Lethal Force?
"It's the psychotronic accumulation of everything I have a terrible and unpleasant fondness for: ultraviolence, comic books, action movies of all stripes but Hong Kong New Wave cinema in particular.”

How close is the finished film to what you originally intended?
“The film is basically 85 per cent true to the script, but since production occurred over a period of six months, things were tweaked to deal with the challenges of making a film with no money.”

To what extent is this an action picture and to what extent is it a comedy?
“I think it's basically 70 per cent action and 30 per cent comedy; it may seem like the proportions are reversed, but I think the comedy just magnifies the absurdities that already exist in the action genre.”

What were the advantages and disadvantages to playing the lead role as well as writing, directing and producing? (And what lies behind the ‘Cash Flagg Jr’ pseudonym?)
“Now, let me make this clear: Sir Alvin D Ecarma is not Cash Flagg, Jr and Cash Flagg, Jr is not Sir Alvin D Ecarma. Cash is a hard working artist who constantly strives to better his craft and the world around him. The idea that we are one and the same is an Urban Legend and possibly part of a wider Masonic conspiracy. Currently, Cash is in Los Angeles, pursuing his acting career.”

How has Lethal Force been received by audiences and critics?
“The response has been overwhelmingly positive and it has been a tremendous artistic validation; I think we're batting .900 when it comes to critics and there's only been one truly horrible public screening where I wanted to stick my head in an oven.” 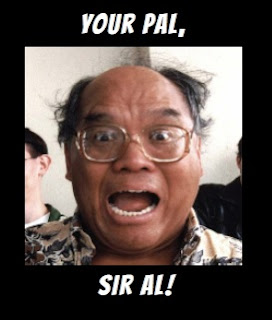 What are your current and future plans?
“I am currently living in [LOCATION REDACTED] where I am employed by [EMPLOYER REDACTED] where I [OCCUPATIONAL SPECIFICS REDACTED]. The hours are good and it has permitted me to focus on developing my follow-up film which I have described as the world's first gay action film, but I've since had to rethink this approach after seeing Top Gun. In any case, I'm taking things nice and easy and I'm hoping with the widespread release of the Lethal Force DVD, I'll be able to make it with something approaching an actual budget.”