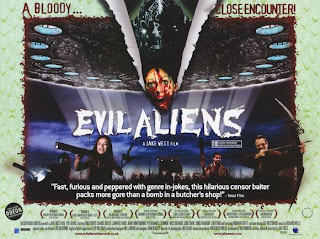 Seven years after his feature debut, 1998’s Razor Blade Smile, Jake West returns with his second film. He hasn’t been idle in that time of course; he has directed acclaimed short films such as Whacked, assorted music videos and loads of great extras for DVD packages of cult movies through his Nucleus Films set-up. Most recently, he and Nucleus partner Marc Morris have moved into DVD distribution with the likes of The Ugliest Woman in the World and Between Your Legs.

So: Razor Blade Smile. Some people hated it. I thought it wasn’t bad for what it was - and what it was, let’s remember, was one of the lowest-budgeted British films ever to receive domestic theatrical distribution. Evil Aliens is hardly the big time - it’s still a low-budget indie - but it benefits from three things that RBS never had: yes, it does have a bigger budget; also West is more experienced; and finally, technology has moved on, allowing for some terrific digital special effects which, while they probably won’t win any prizes, nevertheless don’t distract from the action or lower the film’s overall quality. 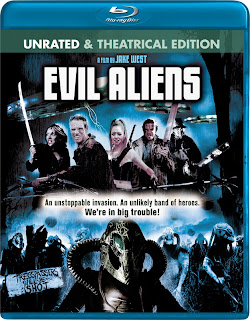 Emily Booth (Pervirella, Cradle of Fear) stars as Michelle Fox, presenter of a low-rent ‘paranormal’ series called Weird World which interviews abductees and other kooks and stages dramatisations of what they claim happened to them. It’s the sort of crap that the Sci-Fi Channel has been padding its schedules with for years. But the ratings are slipping and Foxy’s producer Howard (Red Dwarf’s Norman Lovett in a nicely judged cameo) wants something good for the next show.

The Weird World crew consists of cameraman Ricky (Sam Butler) - he and Foxy have the hots for each other - and sound recordist Jack (Peter O’Connor: The Bunker). In a self-indulgent but funny in-joke (which is, I suppose, what in-jokes are meant to be) we meet these two while they are shooting Razor Blade Smile II! (There were serious plans for RBS2 after the first one came out, but I think it’s fair to say that a sequel is now unlikely.) Also rounded up, to play Cat and her boyfriend in the staged recreations, are bimbo actress Candy (former page 3 stunna Jodie Shaw) who just happens to be Howard the producer’s girlfriend, and lanky gay actor Bruce (Nick Smithers: Ouija Board). Requiring an ‘expert’, they pick up geeky virgin Gavin Gorman (Jamie Honeybourne) who believes passionately in UFOs, ley-lines and all manner of associated bollocks and has been bombarding the cynical Fox with e-mails. He is over-awed to be asked onto the show.

This sextet head off in a rickety old minibus for a remote Welsh island which is only briefly accessible at low tide via a causeway. On this God-forsaken spot live Cat and her three in-bred, English-hating, Welsh-speaking brothers: Llyr (Chris Adamson: Razor Blade Smile, The Last Horror Movie, Judge Dredd), Thomas (Chris Thomas) and Dai (Mark Richard Hayes). 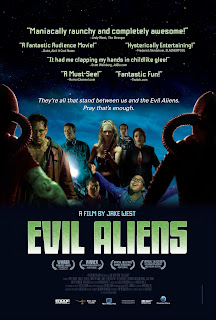 The plot of the film from this point really becomes paper-thin. There are indeed aliens visiting the island and they are nasty buggers happy to slice up anything which gets in their way. The humans are picked off one by one but find creative ways to fight back. And various people find themselves in sexual couplings, occasionally even with their own species. It would be very easy for the film to descend into a great deal of running around and shouting but in fact the script is taut, the direction smart and stylish and the well-rounded characters are each given their own personal little character arc (though some arcs are longer than others). Most importantly, the comedy is spot on.

Also in the mix are some floating robotic spheres which are dispatched with a cricket bat, a woman with three tits, a crop circle, a banana skin, a joke about nerdy Douglas Adams fans, a terrific CGI spaceship and a combine harvester put to a novel use. In fact, it would be remiss of me not to point out that I howled with laughter at the combine harvester scene, one of the funniest things that I have seen on the big screen for quite some time. The choice of music is particularly important here, though it may not have quite the same cultural reference for viewers outside the UK.

Aside from that scene, the rest of the music is by Richard Wells, who also scored Razor Blade Smile and the British release of Ong Bak. Tim Berry and Tristan Versluis of Life Creations (LD50, Darkhunters, Broken) were responsible for the alien heads and the vast amount of prosthetic injuries which include numerous limbs and heads ripped from bodies. This is a very, very gory film featuring gallons of spurting fake blood (plus a certain amount of CGI blood, also spurting). Comparisons to Peter Jackson’s Bad Taste are inevitable and frankly valid. Like that film, Evil Aliens manages to be both intelligent and gross at the same time. Rip the celluloid in two and you would find ‘cult classic’ written all the way through it. Even the midnight crowd at Frightfest, some of whom had already survived all four Romero zombie pictures, clapped and cheered.

Slick and stylish, Evil Aliens was very obviously directed by an editor and you can sense the fun that Jake West had in piecing the film together. He has matured in the past seven years - as have we all - and has produced a film which stands to make him much better known as a feature director, rather than just the guy who makes documentaries for other people’s DVDs. 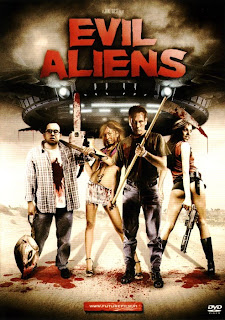 The cast all acquit themselves well, with Emily Booth giving a stand-out performance which may be the best of her career. It’s a good role that she can get her teeth into, demonstrating what a genuinely talented actress she can be when given the chance. Even Jodie Shaw (also in Adam Mason’s Dust) turns in a good performance. James Heathcote and Dan Palmer are seen briefly as their Onkey and Merv characters from Freak Out and there is some ‘UFO footage’ directed by Freak Out helmer Christian James. Scott Joseph (Retrograde) and Mildred Von Heildegard play the principle aliens under several hours of make-up; Von Heildegard also has an uncredited make-up-free cameo as the actress in the Razor Blade Smile II gag.

Producer Tim Dennison also produced Lighthouse, Room 36, Silent Cry and (way back when) The Revenge of Billy the Kid, to which this film has been compared in some respects. Cal Westbrook, production designer on Demagogue, built the alien costumes from designs by art director Neil Jenkins (The Last Horror Movie).