Dr Jekyll vs the Werewolf 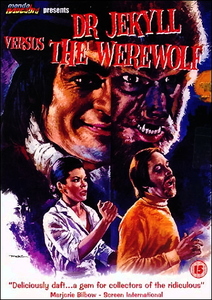 Paul Naschy is a horror movie legend, a one-man Spanish horror industry who is not just a creator of horror films (which he writes under his real name of Jacinto Molina) but a fan as well. The fact that his favourite film of all time ever is Frankenstein Meets the Wolf Man tells you all that you need to know about this guy (though you should also read his excellent autobiography Memoirs of a Wolf Man if you get the chance).

I had the honour of interviewing Naschy on stage when he was a guest at the 2002 Festival of Fantastic Films - he’s a lovely bloke. And he makes great werewolf films.

Waldemar Daninsky, Naschy’s recurrent lycanthrope character, first appeared in 1968 in La Marca del Hombre Lobo, which was released in the UK as Hell’s Creatures and in the USA, famously, as Frankenstein’s Bloody Terror, despite having no Frankenstein connection whatsoever. He was back the following year in Night of the Werewolf and again in 1971 in first Fury of the Wolf Man and then Werewolf Shadow. His encounter with Dr Jekyll was his fifth outing (and far from his last).

In a completely bonkers storyline, newlyweds Imre (Jose Marco: more than 100 films including For a Few Dollars More and Women on the Verge of a Nervous Breakdown!) and Justine (Shirley Corrigan: The Devil’s Nightmare) travel to Transylvania, where he is murdered but she is saved by the intervention of Herr Daninsky (who lives with his mother, Elizabeth Bathory!). The locals aren’t keen on the monster and drive him out, killing his mother, but he escapes with Justine who takes him back to London. 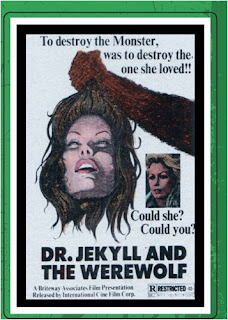 Henry Jekyll (Jack Taylor: Jess Franco’s Count Dracula, The Ninth Gate, the Mexican Neutron movies) is the grandson of the original and he also carries a torch for Justine while shrugging off the affections of his assistant Sandra (Mirta Miller, also in Naschy’s Count Dracula’s Great Love and Vengeance of the Zombies). Justine thinks Henry can cure Waldemar of his lycanthropy using his grandfather’s potion. The completely nonsensical plan is: use the potion to turn Waldemar into Mr Hyde (while safely restrained of course) on a night when a full moon is due. When the lycanthropy kicks in, Mr Hyde will 'kill' the werewolf - it is never explained how this will happen, probably because it makes no damn sense whatsoever - and an injection of the antiserum will then turn Mr Hyde back into Waldemar.

Of course things go pear-shaped, largely due to the interference of the jealous Sandra, and we are treated to some great shots of Naschy as Mr Hyde strolling though Soho on a 1971 evening (he passes a theatre where Alan Ayckbourn’s How the Other Half Loves is playing, starring Robert Morley, Jan Holden and Sheila Steafel), all togged up in pseudo-Victorian costume. This footage was shot secretly from inside a car, so the reactions of passers-by are genuine. The story goes that some drunks tried to pick a fight with Naschy because of his gear but ran off when he threatened them (oh, did I mention he was an Olympic standard weightlifter in the 1960s?). Only these exteriors were shot in London - everything else was filmed in Spain.

There is also a great scene where Hyde enters a swinging discotheque and chats up a young lady, but while she’s away from the table (she actually says, in the dubbed English dialogue, “I have to see a man about a dog”!), the potion wears off. So she returns to find Daninsky (“Who are you? Where that other fella?”) who - guess what night it is - promptly sprouts the old fur and fangs. 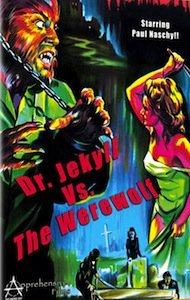 After many years with Naschy’s entire output unavailable in the UK (though Redemption did talk about releasing some of his stuff on VHS a few years ago), it’s great to see not one but two Naschy films out on UK DVD (Werewolf Shadow has also appeared recently). Mondo Macabro’s widescreen print is in good condition for a 30+ year-old film, with only a few barely noticeable marks at reel changes and an unfortunate loud pop on the soundtrack about halfway through. Not much detail in the shadows - of which there are quite a few! - but that’s probably more the original cinematography.

There are good bio-filmographies of principal cast and crew, and an informative essay on Spanish horror by Pete Tombs, but the highlight is a 25-minute subtitled interview with Naschy at his home in Spain, discussing both Dr Jekyll vs the Werewolf in particular and his film career in general. Like the text-based extras, this featurette is illustrated with some great posters and stills, and the interview is both a good primer for those new to the world of Naschy and a fascinating insight for more experienced Waldemar-watchers.

This is a terrific presentation of a very enjoyable film, as one would expect from Mondo Macabro. More please!

MJS rating: B+
review originally posted before November 2004
Posted by MJ Simpson at 14:00