In other words, this is what home movies would be like if they were as much fun to watch as they are to make.

Director/producer/writer Paul Scrabo has pulled together an enormously affectionate and at times laugh-out-loud hilarious pastiche of the underbelly of Hollywood, a film aimed fairly and squarely at people who consider Famous Monster of Filmland and Psychotronic Video to be more important publications than Premiere or Variety. To a loose story about a clinic for sexually dysfunctional people, he has attached a variety of self-contained stories, making this the sort of anthology picture that any film with the words ‘Doctor’ and ‘House’ in the title should be. (Well, apart from, erm, Doctor in the House. Obviously.)

Conrad Brooks, who has made a healthy career out of being ‘the guy who used to be in Ed Wood movies’ plays a former horror actor, Conrad Andrews, who is house-sitting for Dr Horace, a sex therapist who runs a successful clinic in the little town of Clear Lake. His friend Frank Mannering, a former horror movie scriptwriter who says he wrote John Carradine’s last three films (“and he was dead for two of them”) turns up, desperate to borrow 500 dollars. (I think it’s a gambling debt, but anyway he needs to have it before his wife gets back from wherever she has been.) ‘Frank Mannering’, of course, was Patrick Knowles’ character in Frankenstein Meets the Wolf Man and is played here by make-up man Michael R Thomas, whose other turns in front of the camera include Erotic Witch Project 2 and 3, Mistress (of) Frankenstein, Spiderbabe and The Ghost of Angela Webb.

When three clients arrive at the clinic, one of whom is willing to pay $5,000 cash, Conrad sees a way to help his friend by presenting Frank as Doctor Horace’s locum, ‘Dr Horror.’ Initially opposed to the idea, Frank treats the situation like one of his old movie scripts and plays the character as an impression of Bela Lugosi. And so the confusion, and the fun, begins.

Two of the clients are very recognisable to anyone who watches modern B-movies. Trent Haaga (Hell Asylum) is Mark Adams, an insincere creep who sees the clinic as a great opportunity to pick up women. He hits on Valerie Kenton, played by the ubiquitous (but who’s complaining?) Debbie Rochon, whose extensive CV includes Gladiator Eroticus, The Sexy Sixth Sense, Filthy McNasty (and other low budget pictures from Low Budget Pictures), Playmate of the Apes, Witchouse 3, Corpses are Forever, Weregrrl, Bleed, Screech of the Decapitated etc etc etc. Haaga and Rochon have almost become a double act over the years, having worked together (though not necessarily both on the same side of the camera) on Terror Firmer, Toxic Avenger IV, Dead and Rotting, Deadly Stingers, Killjoy 2, Mulva: Zombie Ass Kicker, Suburban Nightmare and Tales from the Crapper. The less familiar face is Nate Sears as Ashley Cavanaugh, who is prepared to pay five grand if he can be reassured about his doubts that his fiancée may not be the perfect woman (he is also terrified of lesbians).

The first story presented in the anthology format deals with Valerie and her fear that men will always leave her. In this variation on ‘The Monkey’s Paw’, we look into Valerie’s future when she is married to Mark and determined that he will not walk out on her. In order to ensure this, she stabs him to death - but a year later he returns as a pasty-faced zombie. This is a very funny sequence, with undead Mark bemoaning the fact that “since Night of the fucking Living Dead” everyone assumes that zombies walk around like so and Valerie realising that not only will he always be with her, but rigor mortis means he will always “be ready”...

Attempts to cure Ashley’s fear of lesbians involve a triptych of spot-on spoofs of films by ‘Win Jymorski, ‘Fred Oldan Gray’ and ‘Jay Lynched’, each of which rapidly descends into sapphic clinches. Mark then features in a werewolf tale, with Michael R Thomas appearing as Lugosi’s Ygor character from the Frankenstein movies, complete with broken neck (a character and make-up he previously used in Titanic 2000). Haaga’s lycanthropic make-up is based on Henry Hull in Werewolf of London but as the actor has a much thinner face than Hull this makes him look like one of the geekiest werewolves in cinematic history, which was probably the intended (comic) effect. 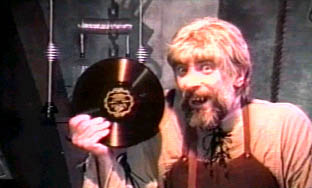 Mark finds that he becomes a werewolf whenever he is aroused which, given his wolf-like tendencies, is any time he is with a beautiful woman. The editing in this sequence (also by Scrabo) is superb, cutting imperceptibly - yet with perfect comic timing - between shots of Haaga with and without the quite extensive make-up (applied by Thomas).

Finally there is a science fiction spoof, featuring Ashley, in which a race of female aliens come to Earth seeking a mate for their queen. Written separately by Brinke Stevens (who shares screenplay credit and also makes the briefest of cameos), this features some cheap-but-fun CGI spaceship shots and a certain amount of seaside postcard sauciness which is probably the closest that the film gets to being ‘erotic’. Meanwhile in the framing story Valerie has discovered that Conrad was the horror movie host that she watched as a child, a local councillor running for mayor is attempting to get Dr Horace’s clinic shut down and Frank’s wife is waiting to be picked up at the airport.

This canter through the plot(s) doesn’t really do justice to a well-thought out script filled with interesting, believable main characters and dozens of clever little cameos. The problem, if one wants to be picky, is that at two and a quarter hours Dr Horror is too long. This running time includes an overture and an entr’acte, which are quaint additions that hark back to an earlier era (the latter of which also gives one a chance to grab a drink and/or visit the loo if you’re quick). As a consequence of this, the film is probably best watched in two halves.

Scrabo’s editing is technically faultless throughout, not just in the werewolf sequence. However, many of the scenes would benefit from a faster pace, whether that was achieved through editing or direction. Dr Horror is basically a slice of vaudeville, packed with plenty of groan-inducing old jokes, but it doesn’t have quite the zing of a good vaudeville routine (and even if it did, I doubt whether that could be maintained for 135 minutes). But that’s not to say there’s anything wrong here, it’s just a suggestion of how something very good could have been made even better. 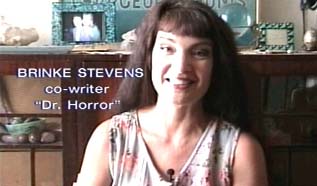 And there really is loads to enjoy in this everything-but-Elvira’s-kitchen-sink mishmash of monster fun, not least a wonderful song and dance sequence starring Rochon, Thomas and legendary horror host Zacherley (who also pops up occasionally to comment wryly on proceedings). Among the star-studded cast are Tomb Raider comic-book model Roxanne Michaels (The Resurrection Game, Nikos the Impaler) under her other name of Jasi Cotton Lanier, film historian and collector Bob Burns, Tina Krause (Witchouse 3, Psycho Sisters, Bloodletting), notorious ultra-low-budget auteur David ‘The Rock’ Nelson (Conrad Brooks vs the Werewolf) and numerous other cast and crew from films such as Weregrrl, Erotic Time Machine, Quest for the Egg Salad, Lord of the G-Strings and assorted Sub Rosa (and sub-Sub Rosa) mini-epics.

Basically, here’s a lot of people whose CVs to date have mostly been lame softcore sex comedies that are about as sexy as Confessions of a Window Cleaner but not nearly as funny, finally given the chance to actually play something approaching proper comedy without having to stop every five minutes for another tedious lesbian fondle.

Scrabo himself seems to spend most of his time working on James Bond documentaries and so this must have been both a real change and a labour of love for him. And he can be proud of what he has created: it’s funny, it’s well-shot, it’s nicely packaged and it’s unique. In an era when accessibility of technology has vastly increased the number of films being made and distributed at the lower end of the production spectrum, something like Dr Horror really stands out, not least because it is genuinely entertaining. Haaga and Rochon hold the film together with their established on-screen chemistry while Brooks and Thomas have a grand old time with their own double act.

If you’re not reasonably familiar with the works of people like Debbie Rochon, Brinke Stevens, Trent Haaga and co, the film may fall flat - especially given its length. On the other hand, you don’t need to have seen every Erotic [insert title here] DTV movie to spot at least some of the inside jokes of casting and directing. (In fact, let’s face it, you only need to have seen one of those films - in my case, Mistress of Frankenstein - and you have effectively seen them all.) The viewer also has to accept that a lot of this will go over your head. For example, there’s an old guy named Uncle Floyd who is evidently a name among aficionados but I haven’t a clue who he is. 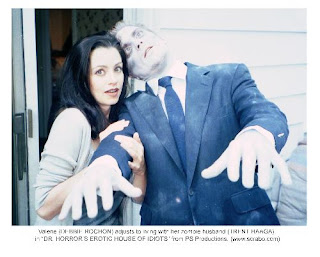 Slightly confusingly, the ‘extras’ button on the DVD menu leads not to an extras menu but straight to a pretty good documentary, That’s Independent. Running about 50 minutes, this is part behind-the-scenes, with the expected out-takes and interviews, and part overview of the genre. Scrabo bravely digs out clips from some of the 8mm films which he made in his youth (plus some footage from associate producer Rich Scrivani’s ambitious but sadly unfinished unofficial Universal sequel Frankenstein Meets the Mummy) and interviews other low-budget indie film-makers such as Michael Legge and Kevin Lindenmuth. The Dr Horror DVD, which carries a 2003 copyright on screen but says 2004 on the sleeve, is available from Paul Scrabo’s website.