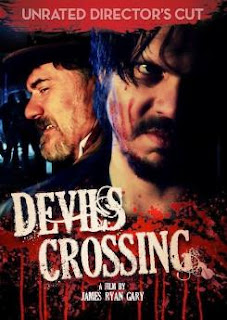 About an hour into Devil’s Crossing I finally realised why this is such a terrific film and why I had been so utterly engrossed in it. Devil’s Crossing is a zombie film that is about people, not zombies.

Far too many zombie films are about zombies. We’ll have the zombies do this, then a zombie can do that, let’s have zombies doing all sorts of things. Enough with the zombies already! Take a look at the granddaddy of the genre. What do the zombies do in Night of the Living Dead? They lurch towards the house and try to get in. They’re a threat, not characters. For most of the film, they’re off-screen.

Same with Dawn of the Dead (and the excellent remake) and to a lessening extent with Day and Land too, although by then Romero was starting to experiment with individual zombies as characters (fair enough - you can’t keep making the same film). I haven’t seen any of Romero’s more recent pictures so can’t judge those.

There are other zombie films which concentrate on human characters rather than zombies. It’s a strength of Shaun of the Dead, for example. And Colin works precisely because it absolutely concentrates on a single zombie character. But in a lot of zombie pictures, the zombies dominate proceedings to the detriment of the movie as a whole; either because too much attention is paid to the undead or (more often) because not enough attention is paid to the living humans.

Which for some folk is fine. There are hordes of zombie fanboys (and fangirls) out there who just want to see pasty-faced cadavers eating people’s guts in new and original ways before having their brains blasted out of the back of their cranium, roll credits, the end. If that’s what floats your boat, good for you. But I like characters in my zombie films. I like to see a siege. I like the zombies to be a relentless, almost inexhaustible army of malevolent but unintelligent savages, wave after wave of them. Devil’s Crossing delivers what I want, in spades.

In the Wild West. Sort of. 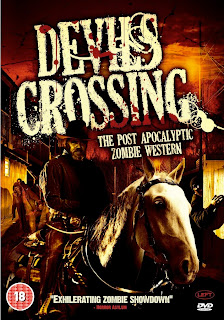 If I did what a lot of places do and simply used a five-star rating, both would merit five stars, no problem. And so would many other films. That, incidentally, is why SFX changed its rating system. In the early days, when I was there, we rated books, films, TV shows and comics from A+ to D-; that’s why I use that system for my MJS ratings. But obviously very, very few things got rated A+. I think in three years the only A+s I gave were for Apollo 13 and (in an ironic way) for a video release of Plan Nine from Outer Space. If grades were evenly distributed, only 8.3% of things would merit A+, but given that distribution should be normal, that means a Gaussian curve so far fewer would merit the top mark, maybe one per cent or so.

But with a five-star system, even distribution would give 20% of items reviewed the top grade and even on a bell-shaped curve, about ten per cent will still make it. And in the case of SFX, as with all those other mags and websites, the more stuff you rate as the top grade, the more often you get your name on the poster or sleeve. Anyway, I stick with my 12-point system but I rate each film individually on my gut feeling. I don’t have some master-list somewhere that lets me calculate this stuff: it’s a bit better than this but not so great as that, so it must have an MJS rating of... aha!

I seem to have wandered off my point somewhat. I do that. I’m old. Where are my slippers? Who are you?

Devil’s Crossing is set in the wild west but the ‘western town’ tourist attraction where it was filmed has things like telegraph poles and other 20th/21st century items which would spoil the illusion. Rather cleverly, the makers have just said, let’s make this a post-apocalyptic setting which has basically reverted to being like the wild west. And you know what? That works. It’s not foregrounded, there’s just a couple of mentions of some terrible war where many of the population were killed. It not only excuses any chronological anomalies in the background, it also allows greater freedom of things like costumes.

Nevertheless, for all intents and purposes, this is the wild west.

The zombies don’t even appear until well into the film. There’s a prologue about a bounty hunter shooting a gang which, we assume, will become relevant later (it does) after which the action is entirely confined to the interior and exterior of a saloon in a one-horse town. There’s a few regulars, laughing and drinking with the good-time girls, plus an English barman, a largely ineffectual Sheriff and a stranger - the bounty hunter - sitting in the corner. Drinking milk.

Upstairs, local bastard ‘Big Dermot’ is drunkenly taking out his inadequacies on one of the girls. When he comes down to the bar, he starts causing serious trouble until the stranger cleans his clock with some smart moves and throws him out. 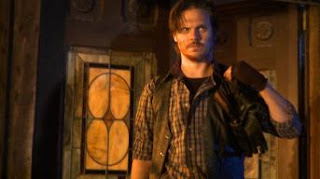 The stranger is Shadrach and he knows bad things are coming. Bad dead things that have got up again. But first, another man appears in the bar, with a natty brown derby and a Southern accent thick as molasses which acks ent you ates ev er ee syll ah bull. This is Louis, and Shadrach works for him, killing people. And tonight Shadrach has finally taken a stand and refused to carry out a killing. And for that the whole town is going to pay.

After an initial attack, the survivors barricade themselves into the saloon but those wooden planks won’t keep the zombie hoardes out for ever. The third act is a simply magnificent siege as the barman, the sheriff and one of the girls fight off wave after wave of zombies while upstairs Shadrach is dealing with those trying to enter by alternative routes (the rest of the survivors are in the cellar). It’s a frightening, exciting, tense, extended sequence, perfectly edited to move between the two levels. It really reminded me of Zulu, and I can think of no higher praise.

These are real people that we care about, doing their best to survive against a threat they can barely understand. This is that rare zombie film where people don’t believe that what they’re facing are reanimated corpses who want to eat them because that is so obviously bullshit.

Wave after wave they come. Again and again the humans fight them back. With rifles and pistols and then with swords and knives and fists, just managing to stay out of reach of those hungry teeth. Front rank, fire! Second rank, fire! Third rank, fire! It’s great, I tell you. It’s storming.

The cast are uniformly great. Michael Sharpe (Palmetto Haunting, Scarecrow at Midnight) is the Clint Eastwood-style solid rock around which the action revolves, while Patrick G Keenan (Dark Remains, Remnants) clearly has a ball as the deliciously evil Louis. Andy Boswell (Cold Storage, Night Feeders) provides the gruesome effects which support, rather than dominate, the story and characters. And writer-director James Ryan Gary demonstrates that he understands both genres - horror and western - by effectively combining the two without losing anything of either. 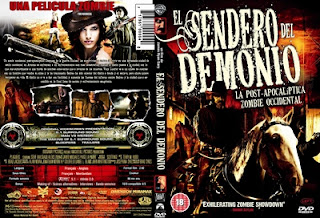 Too many people think all you need for a western are stetsons and horses but a good western isn’t about where or when, it’s about how and why, it’s about the people and the situations they face in a modern world that hasn’t finished building itself yet, a frontier both geographical and temporal.

Devil’s Crossing captures this perfectly while also being an enormously enjoyable, exciting, thrilling zombie film of the sort that so rarely gets made nowadays. Top notch stuff!