Emily and the Baba Yaga

Any good horror fan should know what a ‘Baba Yaga’ is. Baba Yaga, Devil Witch was an early 1970s Euro-horror starring George Eastman although the character herself stems from Russian folklore - and indeed, there have been several East European films about Baba Yaga. I don’t believe there has ever been a British one before though.

Basically, all you need to know is this: Baba Yaga is a skeletal and hideously ugly old witch, thoroughly evil and unpleasant, who lives in the forest in a hut that stands on giant chicken legs.

Emily and the Baba Yaga is a six-minute computer-animated fable which is as delightful as it is gothic, as skilfully directed as it is gratuitously violent.

Emily is an adorable little girl with black hair and great big eyes (who is surprisingly well-built for a ‘little girl’, hem hem) who lives in the forest with her father Bob. After his wife’s death, Bob is teaching his little girl how to use power tools when into their lives comes sassy, conniving Fifi, a proto-stepmother whose blonde locks and shelf-like bosom are enough to distract Bob from her rotting teeth and machiavellian ways. 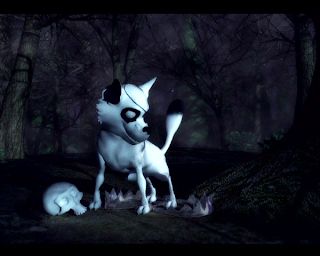 Emily is sent by the new woman in the house to visit an old lady of her aquaintance, Baba Yaga, who proves to be... well, we know already and Emily soon finds out. At first defending herself by accident, when Emily realises the danger that she is in, she resorts to power tools - specifically a damn great chainsaw - to sort things out.

This is a wonderful film. There is a bit of rhyming narration read by a little girl, but for the most part the pictures tell the story. The four human characters are angular caricatures, more Jimmy Neutron than Final Fantasy, and there are some animals too, whom Emily befriends in the woods, although those scenes are a little underdeveloped and we’re not really shown enough to understand what is going on and why.

There is a slightly stilted jerkiness to the animation and a simplicity to the settings which might bother some people familiar only with the mega-budget slickness and über-detail of the Shrek films, but which works perfectly well here. Any animation limitations are offset by a clever script and wonderful directorial attention to a few minor details (such as Baba Yaga blowing out the lantern beside her front door before scuttling inside after Emily). There is a thoughtful and sympathetic lead character, a genuinely scary and threatening villain - and a hut on chicken legs! What more could a horror/animation fan want?

Director/editor Clive Tonge (also credited with ‘visual effects and compositing’ and ‘original music and sound design’) and producer Siobhan Fenton are both lecturers at the University of Teesside. Writer Rachel Mathews also provided the scripts for two shorts which sound terrific and which I now desperately want to see: the RTS Award-winning Danny and his Amazing Teeth (“Danny gains unwanted popularity when his metal teeth start picking up radio signals. Can Serena save him from his new found fame?”) and the BAFTA-nominated Mrs Buchan (“Mrs Buchan believes she and her followers will be saved in the forthcoming Doomsday if they wear their hair in large quiffs. Her faith is shaken when one of her sect starts wearing platform boots instead.”)

Justifiably acclaimed, Emily and the Baba Yaga has so far been screened at several festivals including Munich, LA and Edinburgh. This really is a terrific little movie which you should make every effort to see.