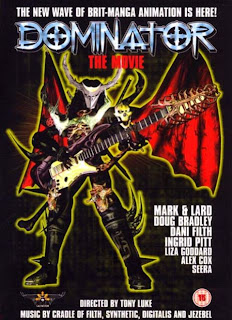 Dominator started life as a black and white strip in the old Metal Hammer rock music magazine many years ago. Then it became a hit manga in Japan, the first western-created comic-strip to be published in a major Japanese title (Kodansha’s Comic Afternoon). And now Dom is back as the first ever all-British, all-CGI feature film!

Actually, ‘all-British’ isn’t entirely accurate as top Japanese character designer Yasushi Nirasawa gets a specific credit for designing the ‘Lady Violator’ character. But in all other respects, especially Alan Grant’s script and the performances from a voice cast which defines ‘eclectic’, this is as British as they come.

Dr Payne (Doug Bradley: Hellraiser, Red Lines, On Edge - also credited as Executive Producer) spends his time casting spells over corpses to prevent their reanimation as zombies, assisted by his overweight mute sidekick Sidney (a sort of animated Tor Johnson). Meanwhile, his three daughters from three different mothers - blonde guitarist Tara (Tara Harley), redhead bassist Fina (Liza Goddard - no honestly, she’s the director’s cousin!) and brunette drummer Molly - are a rock band called Crowcut who practise upstairs. When they play a song based on one of Dad’s old grimoires, The Lost Chord, it opens a dimensional portal to ‘Darkadia, the sonic pits of Hell’ through which is sucked scary, bat-winged, chrome-masked rock’n’roll demon Dominator (Dani Filth: Cradle of Fear).

Unfortunately three other demons - sexy black and white Lady Violator (ex-Hammer star Ingrid Pitt) and her two cronies Decimator and Extricator (Radio 1 DJs Mark and Lard) - follow Dominator through the portal, sent by wannabe Lord of the Underworld Desecrator. It seems that Lord Desecrator stole the Key to Hell (a literal gold key) from Lucifer but his plans were thwarted when Dominator stole it from him to prevent his usurping Lucifer’s rule. Lady Violator is Dominator’s former lover and has been sent to kill him and retrieve the key. I hope you’re following all this, because there will be a test later.

Dr Payne has no idea how to send Dominator back or even close the portal, and the big demonic guy finds himself working for creepy, goatee-wearing government advisor Bishop (director and Godzilla fan Alex Cox). Then up pops Hellkat (Sci-Fi Channel presenter Seera Backhouse) who is the half-human, half-demon offspring of a woman who was raped by Lord Desecrator last time he visited Earth. Dominator has the hots for Hellkat, but then he seems to have the hots for pretty much anything in a skirt (or in this movie, in suspenders and fetish basque!) which causes friction between the half-sisters in Crowcut. It all ends with a big apocalyptic fight against Desecrator himself.

It’s safe to say that there is nothing else like Dominator. The designs are terrific but the animation is by necessity somewhat limited. Renga Media haven’t used motion-capture, like Roughnecks, Dan Dare and other TV cartoons, and they have made this film on a budget which wouldn’t pay for the paper clips on the average Pixar or Dreamworks CGI feature. At first it’s like watching an arcade game - or rather one of those animated intros at the beginning of an arcade game - but it just takes a bit of getting used to. 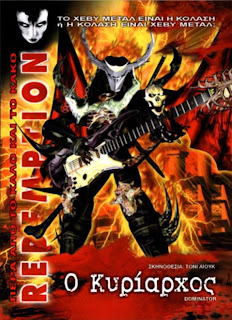 Although the names are slightly confusing (all those Ds!) the characters are clearly defined and dialogue takes a back-seat to kick-arse rock’n’roll action. Above all, this is a comedy and nothing is meant to be taken seriously. Dominator’s familiar, a slavering scarlet blob named Shagg (‘voiced’ by cult author Robert Rankin, who also provides opening narration) provides some of the more obvious comedy, but the real stars are Decimator (a heavyset humanoid figure with a giant spiked ball on his hand) and Extricator (a giant flying skull who frequently points out his lack of normal appendages: “Smartarse? I haven’t got an arse, smart or otherwise, have I?”). Mark and Lard clearly have a ball with these two, improvising some of their scenes as the demonic duo discover the joys of alcohol and decide that Earth is actually not too bad a place after all.

Dominator has ‘cult movie’ written all over it, a groundbreaking exercise in animation with a script that wears its Britishness proudly. The Renga team of Tony Luke, Doug Bradley, Alan Grant and Yasushi Nirasawa previously brought us the extraordinary live-action/stop-motion pilot Archangel Thunderbird. I can’t wait to see what they’re going to do next.

MJS rating: A-
review originally posted before November 2004
Posted by MJ Simpson at 15:45