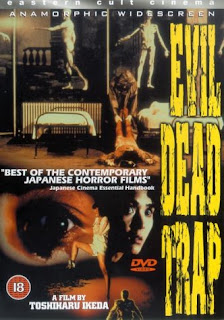 One of the most notorious Japanese horror films, Evil Dead Trap (Shiryo no Wana) turns out to be a 75 per cent brilliant movie. Unfortunately, the logistics of the matter are not that it is consistently pretty good, but that the first 75 minutes is jaw-droppingly brilliant and the last 25 minutes are, not to put too fine a point on it, bollocks.

Miyuki Ono (Black Rain, GI Samurai, Sayonara Jupiter) stars as Nami, presenter of a late night TV programme which shows viewers' home-made videos. She receives what appears to be a genuine snuff movie and sets off to investigate accompanied by four of her colleagues. They find a large, derelict industrial complex where the map shows only a field and spilt up to look around...

It should come as no surprise that most of the cast are killed in deeply unpleasant ways, but I won’t spoil things by saying who is killed how and in what order. But this is blisteringly good horror. The deaths are gruesome - thanks to a combination of good effects and good acting - and imaginatively different without being humorous or self-referential. Really nasty stuff that will have you on the edge of your seat, wondering not just who will survive but also precisely what is happening. There’s a terrific vagueness about whether this is the work of a psycho or something more supernatural; if the former then he’s gone to an extraordinary amount of preparation. 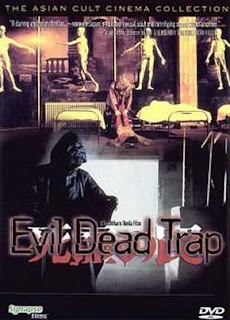 Nami encounters a strange young man, Muraki (Yuji Honma: Merry Christmas Mr Lawrence) who is looking for his brother, and we also get glimpses of a mysterious cowled figure and a man held prisoner in a pit.

It’s tense, it’s genuinely horrific, it’s beautifully directed by Ikeda with a real eye for colour and marvellous use of the geometry offered by the perspectives of corridors. Really absolutely one of the best horror films (Japanese or otherwise) I’ve ever seen.

Then, about 20-25 minutes from the end, it suddenly becomes a completely different film - a very, very silly monster movie with a ludicrously unconvincing prosthetic monster. All the tension and fear that Ikeda has built up over the previous hour and a quarter is swiftly dissipated in a succession of scenes which are simply stupid. Had the film played like that from the start, that would be fine - Lord knows I’ve nothing against dumb movies! - but a magnificent piece of horror cinema is thrown away with nonsensical plot twists and a stupid, pointless monster. Extraordinary.

There’s no doubt that Evil Dead Trap is worth watching for the first 75 minutes or so, but be prepared to have your expectations dashed by a ridiculous finale. 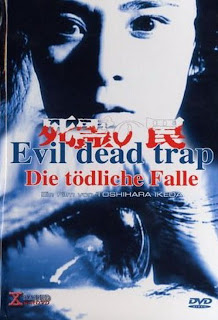 Artsmagic’s Region 2 DVD, on their Eastern Cult Cinema label, has the usual flawless anamorphic transfer although there are several atypically careless and distracting typos in the subtitles. This is the first Artsmagic disc to carry biographies and filmographies of director and crew written by me, so I’ll refrain from critiquing them (except to note that they are, I hope and believe, an improvement over those carried on previous Artsmagic discs). It is also a little cheeky of the label to claim a ‘cast list’ as an extra when it simply replicates the filmographies sub-menu. Also included are a stills gallery and trailers for this film, Junk and Uzumaki. Evil Dead Trap 2: Hideki, also available from Artsmagic, was an unconnected sequel three years later.

MJS rating: B+
review originally posted before November 2004
Posted by MJ Simpson at 21:30