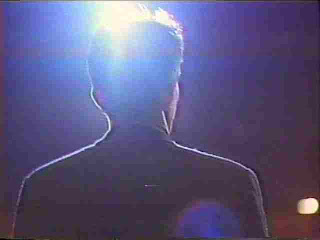 Eight years ago, at the Festival of Fantastic Films in Manchester, I briefly met Masatoshi Takeuchi. I didn’t speak any Japanese at that point and he didn’t speak English - the only word we both knew was ‘Ultraman’ - but he very kindly gave me a copy of his film, Ansatsu/The Assassin. To my shame, it has taken me eight years to watch it.

Finally, I sat down and watched it. And I can honestly say that, though it’s very well made, I have not the slightest clue what it’s about. I mean, not an inkling. I don’t even know what genre to put it in (if any). The only clue I can find is this brief description from a review of the 1998 Mannheim International Film Festival: “Masatoshi Takeuchi's The Assassin (Japan) investigates the mental co-operation between a murderer and a genius in a psychological thriller whose soundtrack was influenced by Noh theatre.”

Does it? Does it indeed?

This is a very stylish film: everyone wears a suit and most of them wear glasses. But it is incredibly slowly paced and languorous and it is also extremely dark. All the interiors are in barely lit rooms and all the exteriors seen to happen at sunset. It is to the credit of cinematographer Daisuke Akatagawa and lighting rigger Norio Ogikubo that we can see anything at all. 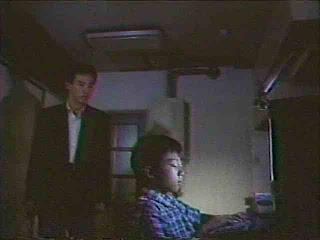 I don’t know who any of the characters are. Until nearly the end, only one is referred to by name and he died three years earlier. He was apparently trying to kill someone called ‘The Old-Wiseman’ but failed and now our hero, a young chap whose name is never given, has the job. There is also a boy of about 12 or so and a young woman of about 20, plus various other blokes.

What the film does have is recurring themes. There is a lot of stuff about clocks and watches, including a visit to an enigmatic horologist, and there is a lot of stuff about cigarettes and cigarette lighters. Also hands feature prominently with numerous shots of a hand unfolding, fingers splayed, reminiscent of the opening titles to The Tomorrow People. One character’s hand seems to conceal a camera and at one point someone uses their hand to burn someone else’s face. We also see a wonderful mechanical hand - clockwork, not electronic - which made me wonder whether one of the characters might not be an android or at least a cyborg. But I don’t think so.

The Old-Wiseman is using the town - which the characters have recreated as a miniature with little wooden houses - in some sort of world domination plan. The background radiation has increased, drastically reducing the local birth rate, and it seems that there are three important points: a temple, a hospital and the town hall. Using these, The Old-Wiseman has turned the town into a giant antenna. 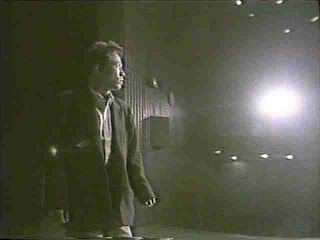 Really, I don’t know. What little dialogue exists is mostly enigmatic epithets, rendered even less comprehensible by an imperfect translation in the subtitles. I really, really do not have the slightest idea what was going on.

And yet I still, strangely, enjoyed Ansatsu. Perhaps it was just a sense of closure, perhaps it was the Japanese-ness of it (it’s very Japanese) which allows it to get away with being so obtuse. It’s certainly not a badly made film, just an impossible one to follow. Ironically, I have been able to find brief synopses for two other Takeuchi films, a thriller called Masculine set in the world of glamour photography and a short drama called Secchen. But Ansatsu remains a mystery to me, even after I have seen it.

Email ThisBlogThis!Share to TwitterShare to FacebookShare to Pinterest
Labels: 1998, Japan