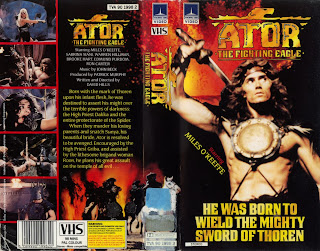 It’s been a while since I watched one of these sword-and-spaghetti sub-Conan fantasy frolics and frankly this is rather a good one. I don’t mean that it’s a particularly good film, but it’s one of the earlier examples of the subgenre and consequently one of the more professional and imaginative.

The pseudonymous writer/director of Ator l’Invincibile is actually old Joe D’Amato himself (Arristide Massaccesi to his mum) who also handled cinematography as ‘Frederick Slonisco’. According to the IMDB, Michele Soavi (Dellamorte Dellamore) has an uncredited hand in the script and that’s quite believable because there are one or two really rather good bits. There’s some dumb stuff too, of course.

The land of wherever-it-is is under the rule of the Spider, whatever that means. The top man is a character merely credited as High Priest of the Spider, played by the mono-monickered Dakkar (Zombie Holocaust), a bald, black, beardy bloke with a penchant for letting large spiders crawl over his arms and head. He also wears an extraordinary amount of gold eye-shadow.

The obligatory prophecy is that the mighty warrior Torin will be defeated by the forces of the Spider but that his son will succeed where Torin failed. Consequently, the black-garbed goons of the Spider are sent out a-Herod-ing, killing all newborn children. But baby Ator is saved by Griba (the redoubtable Edmund Purdom), a banished Priest of the Spider, who cunningly deposits him with a family in a village on the edge of the kingdom, who have just had a daughter of their own. Griba uses his magic (or possibly a dab of foundation) to cover up the ‘mark of Torin’ birthmark on the baby’s shoulder. 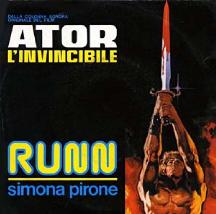 Of course, the baby grows up into Miles O’Keeffe, fresh from his screen debut as Tarzan. He wears big furry boots and a metal frisbee on his chest and has the most massive 1980s poodle hair which makes him look like the keyboard player out of Europe. His stepsister Sunya grows up to be shapely brunette Ritza Brown, to whom he gives that most precious of presents, a bear cub. (Brown went on to be an animation producer, her credits including a 1996 feature-length cartoon about Siegfried and Roy!)

A rather creepy bit of the film is the fact that Ator and Sunya fall in love and decide to get married before they discover that Ator is adopted. Fortunately, as soon as Ator tells their parents about their incestuous plans, they reveal the truth and the wedding can go ahead. But the celebrations are interrupted by the Spider’s men who slay all the villagers and carry off Sunya, which apart from anything else makes one wonder why they didn’t visit the village when they were looking for babies twenty years earlier. Ator and his bear cub decide to set off and rescue Sunya.

On the way he rescues blonde warrior babe Roon (Sabrina Siani, a familiar pair of legs from Mondo Cannibale, 2020 Texas Gladiators, Throne of Fire and Lucio Fulci's Conquest) from two rogues, only to discover that she was in fact the aggressor in the incident and she doesn’t want any help. Later, when he is captured by an all-female tribe who require a new leader to be conceived, Roon beats three other women in a decidedly crap girlie fight to win the honour of being impregnated by the prisoner. She agrees to free him but must then accompany him because the tribe will be after her too, so off they run. With the bear cub - who is actually really cute and easily the star of the film.

When they get separated, Ator hears Roon’s voice but it’s actually a trick played by the witch Indun (Black Emmanuel herself, Laura Gemser, best known to readers of this site as costume designer for Troll 2) who lures him into her surprisingly well-furnished cave and shows him a fake vision of Sunya snuggling up to the bald, black, beardy baddy. Roon rescues him just in time, having been rescued herself by the cub. Actually, that’s probably the funniest part of the film, with Roon trapped in a cave behind a rockfall. In response to her calls, the little cub - it’s maybe two feet long - paws away at the boulders and somehow shifts enough for Roon to get out. But she’s a strapping lass and uninjured: why doesn’t she just clear the rockfall from her side?

Indun has a magic mirror in her cave and when Ator removes the cloth which covers it, she catches sight of her own reflection and turns into a hideous hag. She swears revenge as Ator and Roon depart but in fact we never see her again.

The best part of the film comes when Roon and Ator retrieve a mystical shield which is essential to their quest. First they have to sneak through a cave where a squad of blind warriors are forging swords and axes, then they descend a hole into a cave where the shield lies and it is there that Ator is forced to fight his own shadow. This is a terrifically well directed sequence which uses no special effects, just clever lighting and imaginative fight choreography. Quite possibly the best thing ever in a crap Italian fantasy film.

When they finally confront the Spider soldiers, Roon sacrifices herself while Ator rescues Sunya from a giant web, rather obviously made out of rope (she’s even tied to it). But stap me if there isn’t an actual giant spider glimpsed in the background, waving its legs around. And when Ator battles the High Priest atop a set of stone steps, there is another giant spider (could be the same one but looks to be a bigger and better puppet). Ator uses the shield to make the High Priest explode, or something.

Oh and Griba, who pops up occasionally to offer advice or wipe Ator’s shoulder, revealing a birthmark which everyone immediately identifies as ‘the mark of Torin’, turns out to have his own agenda. Being a banished priest, he was merely using Ator to defeat the current High Priest in an attempt to usurp power within the whole Spider set-up. But he gets his come-uppance. I should also mentioned Purdom’s hair, a long, greasy, flat-cut affair which, frankly, looks like he bought a deluxe Merseybeat wig but it was a size too big. 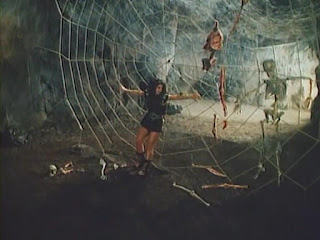 O’Keeffe returned to the character of Ator (or at least, a character called Ator), two years later in a sequel for D’Amato which was released in English as The Blade Master and then, after wielding a more English weapon as Sir Gawain in Sword of the Valiant, was Ator a third and final time in Alfonso Brescia’s Iron Warrior in 1987. He went on to appear as Dracula in Waxwork and as John Smith in a 1995 version of Pocahontas. Eric Allan Kramer took over the character in 1990’s Quest for the Mighty Sword, once again directed by D’Amato.

Edmund Purdom, remarkably, is still alive and is about to celebrate his 82nd birthday as I type this in December 2006. Acting since the early 1950s, his genre credentials include Herod in Herod the Great, Rasputin in The Night They Killed Rasputin, the American President in 2019: After the Fall of New York, Dracula in Fraccia contro Dracula, plus Dr Frankenstein’s Castle of Freaks, Airport '79 rip-off The Concorde Affair, Jesus Franco’s Sinister Eyes of Dr Orloff, City of the Walking Dead, Anthropophagous 2, Endgame and, most recently in 2001, a voice in Titanic: The Animated Movie.

Also in the cast are Nella Pazzafini (as ‘Nat William’) whose 200 or so credits include a slew of pepla, a fistful of spaghetti westerns and a bunch of Bond rip-offs plus The Long Hair of Death, Amazons Against Supermen, Puma Man, Endgame, The Ironmaster and Ator 2 (as a different character). Producer Alex Susmann is like many of the other credits, a pseudonym which was only ever used on this film and its sequel, in this case disguising executive producer Helen Sarlui who gets a ‘...presents’ credit on this print. Her other ex.prod. credits include Alien Predator (which was released in the UK as Mutant 2), Monster Dog, Avi Nesher’s version of She and, oddly, Killer Klowns from Outer Space. The music is by Carlo Maria Cordio (Troll 2 and several other unrelated sequels to American films) with Simona Pirone providing the uncredited song over the end titles. Chris Trainor (another pseudonym) is credited as associate producer. 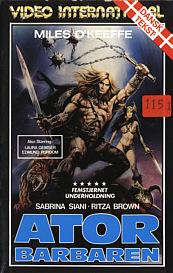 A poster that I found on the web, which just calls the film Ator and was used for the Danish video sleeve, features a three-balled mace and a sabre-toothed tiger - which, if they were in the film, I promise you I would have mentioned. It credits O’Keeffe, Siani, Warren Hillman, Brooke Hart, Ron Carter “and introducing”(!) Edmund Purdom. This lists two executive producers (Susmann and Ron Phillips), two associate producers (Trainor and Joseph Russel) and one common or garden producer (Patrick Murphy) and credits the music to John Beck.

This first Ator film has a few imaginative touches, such as the shadow fight, but mostly it scores over other films in the same genre by simply not cutting corners with cheap locations. No drainpipes or handrails in any of these ancient ruins. O’Keeffe is pleasant if wooden and everyone else has fun overacting, plus I can’t really criticise any film that features Sabrina Siani’s pins.