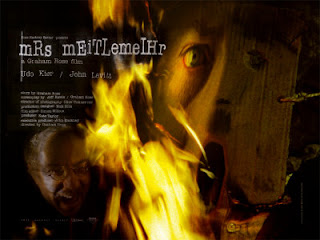 This 29-minute film has to be one of the most amazing shorts I’ve seen for a long time. Also one of the most expensive. I mean, how much does it cost to hire a Panzer tank and a WW2 German half-track personnel carrier just for your prologue?

It is August 1945 and the Allies have entered Berlin. Adolf Hitler (the great Udo Kier) and his immediate circle (not including Eva Braun, who has died in a half-completed suicide pact) have only a few hours to escape. The bodies of Braun and a terrified stranger are dumped and burned as the Fuhrer shaves his moustache and prepares to make the first stage of his journey to South America.

Jumping forward to November 1947, we find that something went wrong and that Adolf has ended up living in a tiny, decrepit flat in London’s East End. The only way he can venture out is disguised as a woman - he calls himself Mrs Meitlemeihr. Ignoring the street urchins he shuffles down to the Post Office to buy a stamp for his desperate letter to Martin Borman (Hendrik Arnst: Enemy at the Gates), safely ensconced in Argentina. 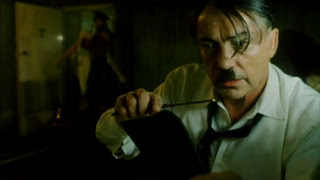 But Mrs Meitlemeihr has an admirer, an old Jewish widower named Lenny Veldermann (John Levitt: Mike and Angelo, The Wind in the Willows) who insinuates himself into her life, inviting himself round for a meal. Knocking back Mr Veldermann’s vodka, Hitler unwisely starts to relax and eventually collapses, whereupon the randy old Jew thinks his luck’s in - until he discovers that Mrs Meitlemeihr is not all the woman she appears to be...

This is a stunningly good movie, a superb first film from top commercials director Graham Rose, whose 20-year career includes more than a thousand ads and has earned him more than 150 awards. He gave us the baldy man in the photobooth for Hamlet, a monochrome Griff Rhys Jones for Holsten Pils and many others. The script (co-written by the actor who played George Dent in Drop the Dead Donkey!) is tight and crisp. But what really amazes is the production values, including extensive recreations of not only an immediately post-war East End street but also Hitler’s bunker and its surroundings. I would guess that this wouldn’t have brought change from a quarter of a million quid, and yet it seems to have been made entirely independently, executive-produced by John Hackney, Graham Rose’s partner in the firm of Rose Hackney Barber.

An excellent cast includes Joerg Stadler (who was also part of Hitler’s circle in the 1993 TV movie Stalag Luft) and young Thomas Sangster (who played the Fuhrer himself - aged ten - in recent biopic Hitler: The Rise of Evil). But the film really belongs to Udo Kier, a cult actor if ever there was one. Hugely prolific, amazingly charismatic and interesting, and (I speak from experience) unfailingly polite, Udo Kier is great in whatever he does. (The following day at the festival saw a screening of one of his first roles in Michael Armstrong’s fantastic Mark of the Devil.) In terms of bone structure and build, I would never have thought of German-born, now-LA-based Kier as suitable to play Hitler. But acting, they say, is all in the eyes. Much of Hitler’s undeniable charisma was in his piercing stare - and Kier has the most amazing eyes, as anyone who has seen any of his films knows. In that respect, this is a perfect piece of casting, quite apart from the fact that it takes an actor of Kier’s skill to pull off a role as challenging as a disillusioned, slightly drunk Fuhrer in drag. 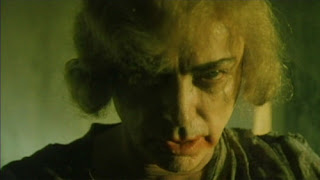 Cinematography is by the very experienced Clive Tickner (Billy the Kid and the Green Baize Vampire, Inspector Morse, Loch Ness, Spice World) with production design by Nick Ellis (Bend It Like Beckham) and art direction by Mark Scruton who worked on Star Wars Episodes I and II.

If there’s a fault with the film, it’s that it’s too short. There’s enough mileage in the concept for a feature, so hopefully this short - which has screened at festivals to great acclaim - will generate a longer remake. In any case, I can’t wait to see Graham Rose’s first feature film.

Review originally posted before November 2004
Posted by MJ Simpson at 21:47