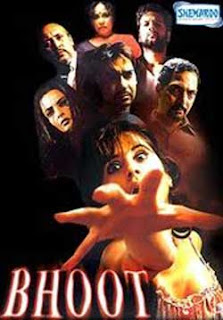 Every year about two dozen or so Indian films get released theatrically in the UK, but unless you have the good fortune to live in a city with a large Asian population (like my home town of Leicester) you’ll probably never have a chance to see any of them. Mostly they’re comedies or thrillers, so it’s a real treat to get to see an honest-to-goodness Hindi horror movie.

‘Bhoot’ is Hindi for ‘ghost’ and even if you don’t know that, the spooky poster is a clue that this is a horror flick. My local Odeon (who often screen Indian films) listed this in their publicity as a ‘romantic drama’ which it certainly isn’t, but then they also said that it’s three hours long. Bhoot is about two hours long and is terrific. The first couple of reels in particular feature some of the scariest images I’ve seen for years that literally had me jumping out of my seat. With the possible exception of (very different) Thai/Hong Kong flick The Eye, this is the most frightening horror film I’ve seen since The Sixth Sense.

The action centres on a young, affluent couple, Vishal (Ajay Devgan, more normally seen in action roles) and Swati (Urmila Matondkar) who move into a nice duplex apartment several stories up a tower block in Mumbai. The previous owner - and her son - both fell to their deaths from the balcony but Vishal is not worried by that and Swati doesn’t (initially) know.

Vishal goes to work all day leaving Swati alone in the flat except when the (rather timid) cleaner (Seema Biswas) comes round. We get a couple of extremely well-done glimpses of two ghosts, a young woman and a small boy, which unnerve us though Swati doesn’t spot them. When she does get a first glimpse of the young woman, she’s as scared as the audience. Her husband calms her but the ‘hallucinations’ become more frequent, stronger and more complex. There’s a great sequence in a cinema (they’re watching Spider-Man!) and a really scary scene on a crowded beach. When Swati also takes to sleepwalking, Vishal takes her to an eminent psychiatrist (Victor Banerjee: Dr Aziz in A Passage to India) who diagnoses multiple personality disorder. Swati remains convinced that what she is experiencing is supernatural and becomes increasingly paranoid and depressed. Things take a sinister new turn when Vishal finds his wife missing. She has been sleepwalking around the building and when he checks in the lobby he finds something really shocking - which I won’t give away except to say that this now becomes a police matter. Nana Patekar (Salaam Bombay) plays a police lieutenant who has his eye on Vishal, Swati and their apartment.

The second act becomes more predictable as the young woman’s ghost fully possesses Swati, necessitating her restraint. This is familiar territory for director Ramgopal Varma who previously made Raat, notorious as ‘the Indian Exorcist’. The cleaner suggests calling in whatever the Indian equivalent of an exorcist is, in this case an exotic young woman garbed in red (Rekha, who has made a staggering 118 movies since her debut as a child actor in 1966, including Karma Sutra: A Tale of Love, recent SF epic Koi... Mil Gaya and a 1992 film called Time Machine!). The question of whether Swati genuinely is possessed or whether there might turn out to be a medical/psychological explanation is thoroughly resolved in the third act which ramps up the horror again to reach an ultimately satisfying conclusion, both morally and cinematically.

Bhoot was made for 150 million Rupees - about two million pounds - which is actually quite tight for such a prestigious Bollywood movie, and has the unusual distinction of opening simultaneously in cinemas in India (250 screens), the UK (well, Leicester) and the United States (well, Manhattan). The British prints have an Indian Film Board certificate but not a BBFC one.

Only in India would a director have to put a disclaimer before the opening credits stating that the film is designed only to scare audiences and does not mean he actually believes in the supernatural (well, maybe not only in India, but certainly not in the UK or USA!). India is a big country with thousands of years of tradition and there are many places where belief in magic and the supernatural is still rock-solid. 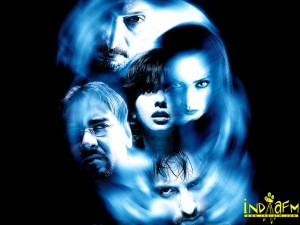 Despite this disclaimer and the credits being in English, there are no subtitles - but do not worry. English is a fairly universal second language on the subcontinent and all the characters slip into it from time to time, sometimes individual words and sometimes whole sentences. About five per cent of the dialogue is in English, enough for the fairly straightforward plot to be easily followed (apparently the prints released in the USA do have subtitles, as did a print shown on British TV at Halloween 2004). It also helps that the film is extremely well directed and the acting is top notch - especially from Matondkar whose descent into madness is seamlessly terrifying, aided by some subtle yet effective make-up.

Although the obvious influences are mostly western (The Sixth Sense, The Exorcist, even a nod to Night of the Living Dead), the film is distinctively Indian. The starey-eyed female ghost’s appearance and body language suggests that Varma may also have seen Ring. Much use is made of the isolation of the couple’s apartment with frequent overhead shots of the building’s lift going up or down. In India horror is associated with the countryside and to set a spook flick in such a modern, urban setting is a bold move.

The sound mix (credited to Owarak Warrier) is fantastic with a full orchestral score that makes up for in punch what it lacks in originality. The music by 'Salim-Sulaiman' (Salim and Sulaiman Merchant: Krrish) builds tension - which Varma drags out as long as he can before a massive chord crashes in with a cut to what we want to see (or don’t want to!). Kudos also to cinematographer Vishal Sinha and editor Shimit Amin who make the film look like the slickest Hollywood production. And it helps that Urmila Matondkar, like many Indian starlets, is twenty times more gorgeous than most A-list Hollywood actresses (Ajay Devgan’s a good-looking guy too). The cast are uniformly excellent in fact; most of them are massive stars in Bollywood though only Banerjee has recognisability in the west. 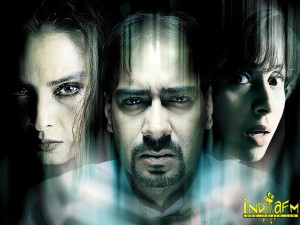 Indian horror films are nothing new. The Ramsay Brothers made the genre their own in the 1970s with notorious Hammer-influenced frightfests like Bandh Darwaza and Khooni Dracula while more recent offerings have included the hit movie Raaz and the kids film Makdee: The Web of the Witch.

If Bhoot plays near you, take a chance and go see it. It’s not three hours long, it has no song and dance numbers - drop that stereotype of Indian cinema! - it’s just a stormingly good horror film.

Review originally posted before November 2004
Posted by MJ Simpson at 23:16