The Art of Pain 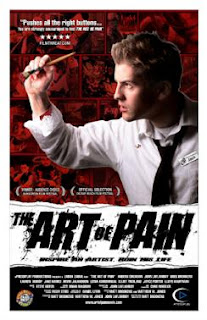 I think I’m going to start this review with one of those checklists of groovy content that Joe Bob Briggs does as a summary at the end of his reviews. So: zombies, ninjas, comic books, murder, Nathaniel Hawthorne parodies, double eye-pokes, swords, cartoon sequences of alien babes battling skunk apes, weed, motorbikes, jazz piano, camp bald cinema managers, hot dogs and Lloyd Kaufman.

Do I need to write any more?

The Art of Pain is an extraordinarily professional-looking indie feature and not at all the sort of Tromatic, psychotronic malarkey that one would expect from the above list. It’s actually a well-crafted insight into the lives of a group of young cinema staff - sometimes touching, sometimes powerful - but with a hilarious ninja subplot and fantasy sequences that tick all the right boxes.

Anders Erickson (Lost Along the Way, Stand Alone) stars as Jack, a talented but bored/frustrated artist who works as concession manager in a Chicago cinema. His team consists of Sharon (actress/comedienne Lauren Bishop who is also a busy voice-over artist), an aspiring actress whom he is dating; Nick (Greg Brookens, brother of director Matt and co-director of several shorts before this), an amiable nerd who is writing an unpublished comic book that Jack is illustrating; and Stacey (Leena Kurishingal) who has occasional moments as a voice of reason but generally isn’t given enough to do in the screenplay. 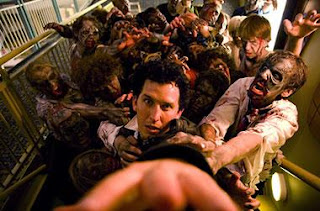 Into this team comes pseudo-Brando tough guy Marcus (John LaFlamboy, who was also production designer and one of the three producers), a motorbikin’ bad boy who never removes his leather jacket, even when in bed. It doesn’t take Marcus long to steal Sharon away from Jack, leading to a scene of Jack heckling his ex from the stalls while she is rehearsing a historical play called The Scarlet Letter 2. Marcus also manages to beat up film director George Romano - played by “and introducing... Lil’ Lloyd Kauffman” (sic) - who is attending a screening of his latest zombie epic.

Manager Charlie (a terrific performance of understated, authoritarian camp from Jake Hames: Stump the Band) wants to sack Marcus but Romano asks for him to have one more chance “because he reminds me of me at that age”. Later, after smoking too much dope, Marcus hallucinates/dreams that he is being chased through the cinema by zombies including undead versions of his colleagues.

What no-one at the cinema knows is that Marcus has a secret: he trained as a ninja under ‘master sensei’ Nobu, played with straight-faced perfection and a just-silly-enough accent (which Marcus comments on) by Arvin Jalandoon, who is about as Japanese as I am. All the other students were awarded black belts but Marcus was refused because Nobu was not satisfied with his dedication and control. This leads to a number of great martial arts scenes as Marcus battles Nobu and/or his acolytes. Skilfully choreographed and directed, these fight scenes just made me wonder why British martial arts films can’t do stuff like this and I think the problem is that British chop-socky flicks concentrate on the moves, approaching fights from the point of view of the actors, rather than concentrating on camera-work and sound effects, considering the audience’s point of view first. Also British martial arts pictures could do with lightening up a bit. These things are meant to be entertainment. But I digress. 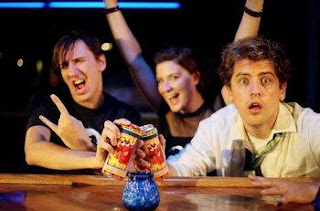 My favourite line of dialogue that I have heard this year occurs in a tense scene where Nobu and Marcus face off against each other, just after Nobu has made a vague threat: “Go on.” “No, I have finished. It was a haiku.”

Having stolen Jack’s girlfriend, Marcus uses his ninja skills to stalk and murder Jack’s best friend Nick, a likeable, accordian-playing, floppy-haired innocent. I particularly liked the scene which mixes flash-animation with live action as Nick explains the plot of his comic to Jack in an empty movie theatre.

The counterpoint to this is that Jack hasn’t painted anything for quite a while but the pain of losing Sharon inspires him to create a powerful masterpiece. Charlie has a very rich aunt (Danielle Brothers) who is seeking an artist to create a mural in the lobby of a new office building she has just had constructed. Jack’s work is just what she is looking for but he is only able to produce a second example after the pain of Nick’s death.

All this comes to a head in an amazing fight between Jack and Marcus in the former’s apartment with knives, swords, punches and televisions being thrown. Marcus apparently sees himself as Jack’s muse, inspiring his great art but at the same time jealous because he has no talent or skill of his own (apart from screwing people’s lives up). Then, just as the film reaches its climax, it quickly ties things up and ends with an epilogue that, although it makes sense is frustratingly unsatisfying - just a little too pat and perfunctory. It’s not a terrible ending and I suppose the message it sends is reassuring and has been adumbrated once or twice in the preceding 90 minutes but it’s not the powerful whammy that such an otherwise brilliant film deserves. 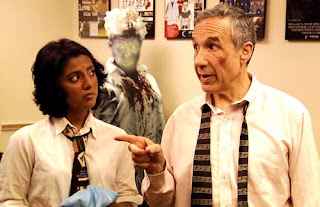 But don’t let that put you off. The Art of Pain is a generally all-round fantastic movie made all the better by the usage of animation, green-screen sequences and zombies. The acting is uniformly top-notch - heck, they even get a great performance out of Lloyd.

The Troma connection is that the Brookens brothers’ half-hour short Skunk Ape!? was distributed on the Best of Tromadance Volume 3 DVD. What stands out is that this film has all the ingredients (apart from mutants and melon-heavy breasts) for an OTT Troma flick but reins them all in to serve a well-structured story and (relatively) believable characters. The Art of Pain a surprisingly successful attempt to meld Troma-style film-making with, well, the rest of cinema. Matt Brookens’ direction is supremely confident and assured, assisted by a great cast and the skilful cinematography of Daniel Kenji Levin (Squeal, The Devil’s Dominoes).

It’s not perfect; nothing is. Sharon seems to pretty much disappear from the second half of the film, Stacey is (as mentioned) underused and a subplot about Jack’s parents (his mother doesn’t know that her son supplies weed to his own jazz-piano playing father) is neat and fleshes out Jack’s character but ultimately doesn’t really go anywhere. An early subplot about a lascivious projectionist (Marshall Bean, who looks like he shot all his stuff separately) is completely gratuitous and so swiftly forgotten that one wonders why it’s there in the first place. But when you have a zombie sequence this good, flash animation bringing Nick’s comic book story ideas to life on screen and a script so literate that it’s not afraid to have the words ‘ennui’ and ‘chiaroscuro’ in the same scene, why quibble? Such minor points are no more important than the number of Fs in the correct spelling of Kaufman.

Also in the cast are Mike McNamara (The Evil One), Mindy Youroukos as a bartender, Wesley Chu as ‘lead ninja’ and John Turk (who was a bodyguard in The Dark Knight) as a cop investigating Nick’s death. Vicky Strei (Squeal) provided the make-up effects; regular Brookens brothers collaborator Steve Kiefer (Bloody Mary Worth) composed the effective score, much of which is based around the melody ‘Beautiful Dreamer’. The comic-book images were drawn by Jacob Elijah Hallinen, co-creator of the Ghost Spy comic; we (very sensibly) never see Jack’s impressive paintings although there is a great shot through a sheet of glass which becomes the canvas as Jack angrily splashes colours across it.

The Art of Pain is something different from the run-of-the-mill genre fare that you’re used to. It’s an imaginative, well-written, extremely well-made slice of cinematic entertainment. Check it out.