Giles Alderson is familiar face to fans of modern British horror, with a CV that includes A Dying Breed, Night Junkies, Till Sunset, E’gad Zombies!, The Torment, Stalled, Tales of the Supernatural and Oliver Milburn’s terrific vampire picture The Harsh Light of Day. Giles kindly answered some email questions in October 2012. 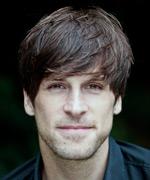 What attracted you to The Harsh Light of Day and the character of Infurnari?
“Infurnari is well written, deep and a great character. And I was only needed down in Dorset for six days. How could I say no? I met with the director Ollie Milburn, chatted through the role and how he was going to shoot it. That appealed massively because he's a very articulate intelligent guy and he and Emma Biggins (the producer) are a great team. So I knew the film would be in safe hands. From the first read it was a great story and an interesting take on revenge that involves the intrigue and mystery of vampires and with Infurnari's world just touching the surface, there are so many places I could go with him.”


How would you compare and contrast Infurnari with your previous vampire role, Vincent in Night Junkies?
“I've not watched Night Junkies for a while now. It was a long time ago and I was very green when I shot that. To compare them...well, they are both low budget but I would say NJ is a very different film to THLoD. Both with totally different ideals and morals. In THLoD, a paralysed man is given the opportunity to exact revenge but with it comes a price. That is great storytelling and with the involvement of vampires makes it a very intriguing prospect.

“Whereas Night Junkies is a survival film of love and loss. Vincent in NJ is a loner who doesn’t know his journey or his fellow 'junkies' and, dare I say it, is a bit of a twat. Whereas Infurnari does know his journey. He loves his 'people' and as they are dying out is recruiting more. He is at peace with his existence and is very happy with who he is and his moral compass. He just doesn't understand humans and feelings.” 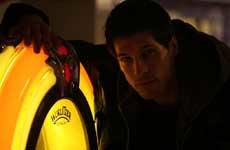 I reckon that about a quarter of your credits are horror films: are you particularly attracted to the genre or is there some other reason why you're cropping up so frequently in horror movies?
“I didn’t really notice that. I think you are right. I suppose it comes down to what is sellable. The British film industry has had a bad few years. There's not been many low budget comedies that have done well recently. Though I have just shot Gridiron UK, a comedy set around the first American Football league set up in the UK, so I hope that breaks the mould. I think film-makers and producers are looking at what will excite distributors and make money. Sci-fi is hard to get right, action is expensive but horrors fit nicely into that hole.

“There are so many cool horror fans out there that there will always be a demand for cool horror films. Sometimes the lower the budget the better. From Kill List to Colin. Which for first time film-makers makes zombies and vampires the target market. It's a shame more money doesn't come in for the rom-coms or the comedies but there just isn't a demand for it and everyone seems to think the Americans do it better. Hopefully that will change soon.”

Quite a few of your films have had blink-and-you'll-miss-'em releases and some seem stuck forever in limbo (I don't think A Dying Breed was ever released and that's five years old now); how frustrating is it for you as an actor to put your all into something that few people ever see?
“It's obviously very frustrating. You never think a project will disappear or not get finished/released when you start it. Everyone has high hopes for them. Sometimes it’s bad management. Sometimes it's about luck. A distributor or sales agent who has promised you the world goes bankrupt then you are stuck, contracts get messy and then, because no one else wants a film that’s been in limbo for a few years, it is too late and all you have got is a few copies on your Mac. It can be soul destroying for film-makers. That’s one of the reasons I'm so proud of the THLoD team because they actually got a cinema release and now it's available on DVD! It's unbelievably hard to get that.” 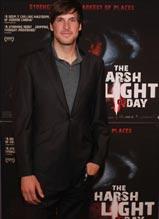 What can you tell me about your role in Stalled, the eagerly awaited toilet zombie feature from the Freak Out team?
“Stalled is brilliant. Exactly what you would expect from a zombie comedy set in a toilet. Dan Palmer (who wrote it and plays the lead character) is 'scared shitless'. If that’s not a tag line to soil your pants then this film is not for you. I've known Christian James and Dan Palmer for a long time now and they are both really great guys so when they asked me to cameo in Stalled, I couldn’t say no. I really hope it does well. It's low budget zombie fun at its best. I think the fans are going to go mental for this. I hope so for the guys’ sake anyway. They deserve it.”