Tuck Bushman and the Legend of Piddledown Dale 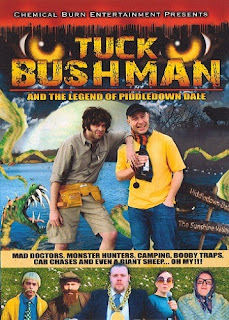 With its parochial setting, over-the-top characterisations, and a small group of actors switching wigs, costumes and grimaces to play a wide range of eccentrics and grotesques, British monster comedy Tuck Bushman and the Legend of Piddledown Dale comes across as a sort of low-rent League of Gentlemen. I don’t know how LoG fans might view it, but as someone who could never get a grip on that series, I enjoyed Tuck Bushman far more. It has neither the self-indulgence nor the self-conscious weirdness of the League, and consequently I was not only entertained throughout the entire 95 minutes, I actually laughed out loud on several occasions.

Writer/director/producer/editor/DP Chris Lumb (also in Mark Macready and the Archangel Murders) stars as Tuck Bushman, a hard-drinking, sexist, bad-tempered, Australian naturalist whose career presenting wildlife shows has gone sour and whose second career as a TV-based monster hunter hasn’t fared much better. He has one last chance to sort his life out when the little Yorkshire town of Piddledown Dale advertises for monster hunters to rid the locality of a conveniently unspecified monster.

Town Mayor Eli Nefarious (Rob Girdler) is the mastermind behind this scheme to increase tourist revenue, which attracts an eclectic mix of nutters and loonies, all eager to pay 20 quid for their monster-hunting license. Standing in lone protest is local park ranger and animal rights activist - and Tuck’s ex-fiancée - Felicity Scruples (Natalie Smeaton).

In his efforts to find the creature, Tuck is assisted by Jerry Stains (Matthew Jackson), a cultured and somewhat precious cameraman/director assigned to him by his dodgy agent Al Sation (also Jackson, adopting exactly the same ‘dodgy agent’ voice that Frank Scantori used in Kill Keith). Meanwhile, Nefarious has called on the services of mad scientist Dr Von Doubleglazing (Lumb again) and his assistant Hunchy (Jackson again) to create a monster, or at least the illusion of one. Jackson and Lumb also play, among other roles, incompetent ‘Yorkshire Vice’ cops Dave Sugar and Ken Spice. 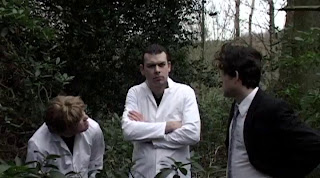 Not absolutely overflowing with plot, Tuck Bushman functions best as a series of very broad sketches, with the various performances just this side of panto, effectively disguising any paucity in the acting. Lumb does a remarkably good job of directing and editing, given how frequently the actors are called on to play multiple characters within one scene. It is abundantly clear that the cast had an absolute ball making this and that translates into a fun time for the viewer too.

There’s not much monster action, no real gore, and certainly nothing scary. There is however a gleeful competition to see who can over-act the most and a whole bunch of likeable, silly characters including such delights as Stains’ curious manservant Eduardo and Captain Pequod, a sailor with a wooden leg (plus two good ones).

Lumb co-wrote the script with Matthew Hick, who appears as Nefarious’ useless, justifiably put-upon lackey Mike Fawner. Lumb, Hick and most of the other cast/crew have worked together on numerous short films since about 2008, of which three are clearly predecessor to the feature: Crazy Dave and the Beast of Halifax Moor, Saturday Night Creature and Sugar and Spice: Yorkshire Vice. One of the few crew with credits outside of Lumb’s work is composer Danny S Elliott (aka Elliott Daniels) who scored another BHR obscurity Call of the Hunter, as well as several non-Lumb horror shorts. Watch out also for Nathan Head (as 'Ray the Roofer') whose plentiful genre credits include both Mark Macready shorts, The Zombie King, Philip Gardiner's Exorcist Chronicles and Dead Walkers, and ADR work on The Eschatrilogy. Quite the BHR regular! 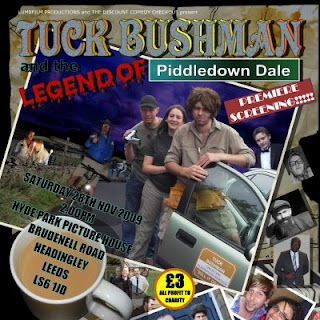 It would be very easy for this to become self-indulgent and boring, of great amusement to the people who made it and a waste of an hour and a half for everyone else. But remarkably, Tuck Bushman - shot around Yorkshire for tuppence ha’penny - avoids those pitfalls and ends up as a jolly, daft and thoroughly enjoyable little indie feature.

It’s not clear why Chemical Burn Entertainment picked this one up for distribution: this is very different to their normal range of titles and I can’t imagine that the humour travels well. But pick it up they did, releasing the DVD in late 2012. In the meantime, Lumb and his chumbs made a sequel, Tuck Bushman and the Demon Bitch Bags. In this 15-minute short, which won the 2012 Halloween Horror Film Challenge (and is, if anything, even funnier then the feature), Tuck, Flick and Jerry face off against a demon (Girdler) who summons a horde of zombies, a female vampire and a forced perspective giant.