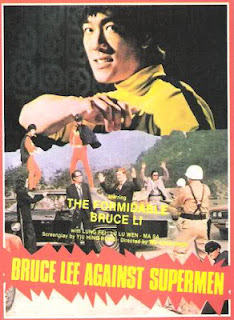 Quite gobsmackingly, this casts Bruce Li as Kato, assistant to the Green Hornet! In the opening scene, he’s wearing the chauffeur’s uniform, mask and cap and all. It’s quite blatant copyright infringement but presumably designed to appeal to all those folks in Hong Kong who felt that Kato was the real star of the series.

The story itself concerns Dr Ting and his new formula which will end world hunger (it involves extracting albumen from petroleum apparently!). Dr Ting is kidnapped, and so is his daughter Alice. Kato (which everyone pronounces like 'Carter') and his friend spend a lot of time chasing the bad guys, who work for master criminal Tiger. So we have the world’s dullest car-chase, as two small cars hurtle along the roads of Hong Kong at about 30 miles an hour, and a similarly mind-numbing and overlong foot-chase. There’s also a ridiculous sequence where Kato follows the car - on foot, pulling a rickshaw! 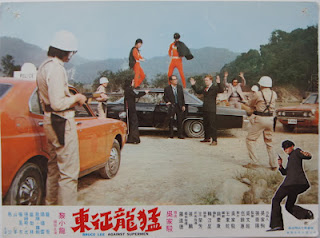 Where do the Supermen come into all this? Well, the bad guys hire two acrobats in the pay of 'Superman' - but this isn’t Clark Kent. Superman and his assistants (who call him 'teacher') wear black outfits with thin white stripes across the chest. Superman, who has a silly moustache and a hilarious bouffant hairstyle, also has a ludicrous little white cape. The two henchmen wear red, monkey-like masks. We also know that this Superman is a bad’un because for the loan of his two henchmen, Tiger pays him “Nine thousand dollars, ten women and a crate of booze”!

Kato battles various black-garbed henchmen, then eventually fights Superman himself, whose only superpower seems to be extravagantly high leaps. This is quite a violent scene, with Kato left bleeding from multiple wounds. And this being a pre-VRA tape, the nunchuck action is intact. Most of the fights are passable, and there’s also a brief cat-fight between Alice and another woman, which ends with them tearing each other’s clothes in a shower - but it’s not as exciting as it sounds. 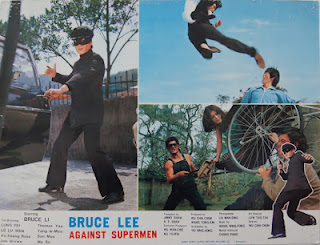 Throughout all this, the Green Hornet himself is kept off-screen due to some injury. When he finally appears, he has a beard and a bright-red superhero costume; Kato changes into a similar costume for the final scene.

Bruce Lee Against Supermen (the actual on-screen title) make no sense whatsoever and is massively padded, yet it’s also strangely entertaining. Can this really have been intended for international distribution? The on-screen English title suggests so. Sheer surrealism through and through.