Beauty and the Beast

How unlikely is this? An all British, feature-length, animated fantasy movie starring Christopher Lee which was made less than 15 years ago and yet remains completely unknown. You won't find this in Lee's filmog on the Inaccurate Movie Database; nor, remarkably, is there any specific mention of it on the normally very reliable British animation website Toonhound, though they do acknowledge that production company Bevanfield made some 'fairy tale specials'. A Google search turned up only a very few sites which mention this film and most of those are Dutch or German.

Michael Hordern plays Monsieur Du Bois, a jeweller in 17th century France who has fallen on hard times after losing much of his work when robbed by a highwayman. He has three daughters: the snobbish Prunella (Susan Sheridan, Trillian in the radio version of The Hitchhiker's Guide to the Galaxy) and Lucinda (Kate O'Mara) and the kind-hearted Beauty (Kellie Bright: Kate Aldridge in The Archers). Christopher Lee is Du Bois' cousin, Monsieur Renard who is accompanied by a rat-like flunky, Monsieur Rodent (Geoffrey Matthews).

The oleaginous Renard, who is independently wealthy, is prepared to go into partnership with Du Bois on condition that he is allowed to marry Beauty. However this potential arrangement is scuppered by the traditional story of Beauty's father spending a night in a mysterious chateau, plucking a rose for his daughter who then volunteers to live at the chateau in order to save her father from the owner's wrath. 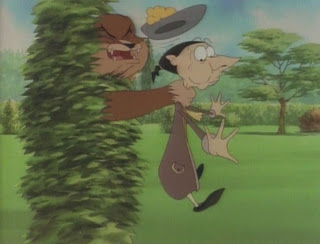 I have to confess that, frustratingly, I was only able to watch the very beginning and the last 10-15 minute of this 67-minute feature because the tape I found in a charity shop wouldn't play properly, so most of the story is inferred from the bits I did see and also some stuff I was able to watch on fast forward.

The Beast himself (voiced by sometime Robin Hood Jason Connery) looks like a large tabby cat, and a pretty friendly one too. It is always summer in the grounds of his chateau where he is attended by a cook/housekeeper, Madame Bombec (Penelope Keith) and two short footmen (uncredited). There is a subplot about Du Bois and Renard, and both stories are wrapped up extraordinarily quickly and unsatisfactorily at the end, which I was able to watch, the tape having settled down by then.

Beauty tells the Beast that although she likes him and enjoys his company, she doesn't love him. Madame Bombec explains to Beauty that the roses in the chateau grounds are linked to the Beast and that each time a rose dies it takes a month off his life, which is why her father picking a bloom was so serious. Beauty asks the Beast to be allowed to see her father, whom she misses and he makes it clear that she can see him but not speak with him and must ask for nothing more.

They use a magic mirror to see that Du Bois is ill in bed, following a visit to Renard's shop. Renard and Rodent were away at a jewellery exhibition in Paris and Du Bois expresses amazement because his cousin is a good businessman but has never shown any skill at designing and manufacturing jewellery. The snooty shop manager shows Du Bois some of Renard's jewellery and of course he recognises it as the stuff that was stolen from him by the highwayman (we were told right back at the start that the highwayman's action was odd as only Renard and Rodent knew about that particular journey by Du Bois). 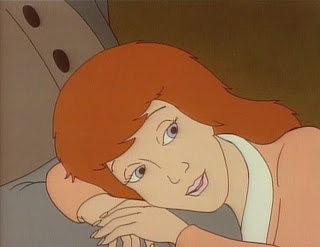 Anyway, Beauty asks to be allowed to visit her father and care for him until he is better and the Beast, despite having instructed her to not ask any more favours, agrees. She steps through the mirror to her father's bedside and explains to him that she can return when he is recovered using a magic ring.

Lucinda and Prunella, who are living it up as socialites while their father is both poor and poorly, overhear this and see that Beauty is wearing a fabulous dress so they resolve to take the magic ring (and the dress) and transport themselves to the castle of this mysterious Monsieur Beast, who is sure to choose one of them in favour of their younger sister.

In quick succession the sisters use the ring to transport themselves to the Beast's chateau but faint in horror when they see him. He comes running, recognising the dress and thinking that Beauty has returned but then collapsing in anguish when he sees it's someone else. Beauty sits up in bed, sensing that the Beast is in pain, and somehow returns to his chateau where she tells him that she realises now how much she cares for him. A tear falls on the Beast who transforms into a handsome prince.

Beauty and the Prince get married and live happily ever after. There is absolutely no explanation of how the Du Bois/Renard plot winds up but the former is shown to be happy, healthy and wealthy once again while Renard and Rodent are seen working in the Prince's kitchen where Madame Bombec chides them for being lazy. This all happens so fast that it almost seems like someone checked the film and said, "Right, we're over 60 minutes. That's as near feature-length as makes no odds. Wrap it all up now." 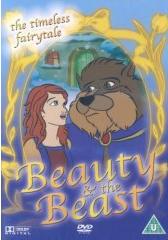 This is an entirely British production; there are no Korean names in these end credits but maybe they should have considered farming this out to Seoul because the animation is awful. Very crude and basic and not helped by frankly poor character designs by Paul Gunson (credited as designer on a semi-animated feature called The Magic 7 which has been in development so long that the star-studded voice cast includes Madeline Kahn and John Candy!) and Gerard Kenny (not the bloke who wrote the theme to Minder?). Gunson - who is not the New Zealand animator Paul Gunson - was subsequnetly involved with both Yoko! Jakamoko! Toto! and the best pre-school series ever made, Tiny Planets.

Though the characters are awful and their movements basic and repetitive, there is some consolation in well-painted backgrounds by Ian Henderson who also worked on both Watership Down and The Plague Dogs. There are two songs by Danny Schogger (who has also written for Celine Dion and has played with or produced just about everybody) and Linda Taylor.

The opening titles and the sleeve call this obscure film, which was released the year after Disney’s justifiably acclaimed version, Bevanfield Presents Beauty and the Beast and the closing credits give the copyright to Foxbridge Ltd. The executive producers are Paul and Mark Levinson. Now, there is a Paul Levinson who writes SF novels and is a Professor of Communication and Media Studies, and there is a Mark Levinson who makes high quality audio products, but they both seem to be American and surely they're different guys, but if so, who are these two? There are two credited directors: 'director of animation' David Thwaytes (who also worked on the 1970s Addams Family cartoon) and 'supervisor director' Timothy Forder.

Bevanfield seems to have been Forder and Swindale's company; according to Toonhound they were responsible for the cartoon series Bill the Minder, What-a-Mess and (the very odd and frankly disturbing) Murun Buchstansangur. They also made The Greedysaurus Gang in 1993 and more recently they produced a TV series based on the Just So Stories, narrated by Geoffrey Matthews. 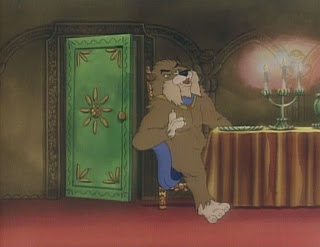 The company made several other animated fantasy films in the early 1990s. Aladdin (from the same writing team) is also feature-length and stars Edward Woodward and Derek Jacobi as well as Penelope Keith and Kate O'Mara again. Thumpkin and the Easter Bunnies (script by Jolen L Victor and Shannon Carney) stars Bill Roberts (presumably the one who was the voice of Rosy's father in Balto and dubs the Patlabor anime movies), Geoffrey Matthews and my old pal Lorelei King (24 Hours in London) but it runs under half an hour, as does a Roberts-narrated version of 'Twas the Night Before Christmas. Toonhound mentions Little Red Riding Hood but I don't have any details on that (they may be referring to an episode of the Forder-directed Tell Me a Story) and there seems to have been a one-hour version of Cinderella.

Forder and Swindale have also made two live-action films, a 1987 drama called Indian Summer and a 1993 version of The Mystery of Edwin Drood starring Robert Powell with Gemma Craven, Barry Evans, Nanette Newman, Glyn Houston and Freddie Jones. Nathalie Harrison, co-writer of Beauty and the Beast, also worked on that film - as production accountant.