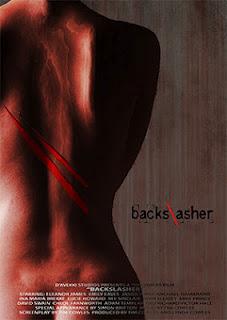 Backslasher is an original, interesting, enjoyable take on the slasher film, starring the always watchable Eleanor James and featuring Jason Impey (whom I have decided, on the spur of the moment, to call the Milton Keynes Cronenberg, to see if it sticks).

Eleanor is Becca, an enterprising young woman who has set up a little business selling lingerie and sex toys through Tupperware-style parties. Well, Ann Summers-style parties I suppose, but I’ve never been to one of them. I used to go to Tupperware parties when I was younger and they were great: masses of food, gaggles of women and loads of great plastic storage containers.

Anyway, in the manner of today’s young people, Becca is “harnessing the power of social media” or whatever it is that they do nowadays. So she has lots of online ‘friends’ on something which is like Facebook (but not actually Facebook, for obvious copyright reasons).

What writer-director Tim Cowles has picked up on is the propensity and potential this situation creates for distorted values of trust, privacy, familiarity and intimacy. Inviting lots of strangers to share details of your life is asking for trouble, isn’t it? Well, it is in a horror film, at least. (In the same way that, for example, in the real world there is no actual inherent danger in going down into the cellar alone.) Backslasher is a thoroughly contemporary film, so watch it now while it’s relevant and credible because in a few years this will look as dated as MySpace: The Movie. 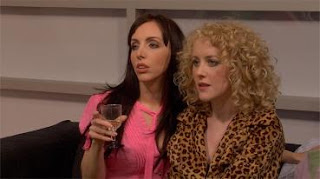 Becca is reluctantly splitting up with her boyfriend John (Michael Gamarano: The Zombie King), who is off to Germany. She shares a house with her mate Ruby, whose own small business seems to be managing a team of cam-girls who perform online for credit card details. Ruby benefits from a smashing performance by Emily Eaves (Aggressive Behaviour), who brings real character to what could have been a somewhat off-the-peg supporting role.

So anyway, someone starts bumping off people whose only connection with each other is that they are part of Becca’s social network of online ‘friends’. There’s a touch of the giallo here: we only ever see a masked figure in a hoodie, and he uses all this online malarkey to taunt/threaten Becca. Who is he, and where will he strike next? Is Becca herself safe? Is she responsible? It all builds up to a tense climax within the bleak, concrete corridors of the trading estate building from where Ruby’s girls do their thing.

Obviously I’m not going to spoil things for you by revealing who the serial killer is, but that’s partly because I’m not sure. The publicity calls this a “social networking slasher, with a supernatural edge and Brit-Horror chic” but I must have missed something because I didn’t get any sense of a supernatural aspect. While watching Backslasher, I was playing out all sorts of scenarios. Maybe it’s him, maybe it’s her, maybe it’s - oop, hang on, he’s become the next victim. (Although, as everyone who has read/seen And Then There Were None knows, being an apparent victim doesn’t preclude you from actually being the killer.) 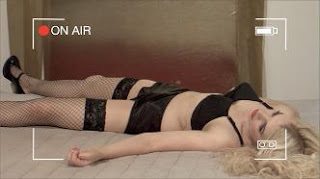 Was it, I wondered, all some sort of complex plot to make Becca think she’s the epicentre of a murder spree and somehow drive her mad? Or could she be the killer herself, with a split personality and psychotic tendencies? Hey, both ideas have been well used in the horror genre over the decades. My interpretation of the ending (and I think this is cryptic enough to not be a spoiler, especially if there really is a supernatural angle because that would mean I was completely wrong) was that it was a sort of anti-Scooby-Doo scenario - which for a moment nonplussed me but then left me increasingly satisfied as I realised how that dovetailed with the overall themes of the story about identity and the nature of real/online relationships. But, as I say, I may be barking up the utterly wrong tree.

There are a few missteps in Backslasher. The opening is confusing as we meet Becca and Ruby at a party with three other minor characters and, Ella James aside, it’s not obvious who’s important/significant/relevant. And the fact that Becca’s dad is a senior policeman surfaces just once, when it’s super-expedient, and is then swiftly forgotten again. But these are minor quibbles. Backslasher has much to recommend it, including a very fine central performance by Ms James (who, the baser among you will be pleased to know, does get her kit off - again).

Jason Impey, who is credited in the cast as playing the killer, though that may have less or more significance than it seems, does a decent job on his main gig as cinematographer, deploying plenty of coloured gels and other effects but not distractingly so. Cowles - who has worked on some of Impey’s films, including DP-ing, so this is kind of a return favour - directs well from his own remarkably coherent and credible script, populated with fleshed-out characters and realistic-sounding dialogue. He also produced, exec-produced, edited and sound-edited, so it’s very much his movie: his debut feature following a series of shorts (DP-ed by Impey) and a couple of paranormal-nonsense ‘documentaries’ for Chemical Burn/Philip Gardiner. 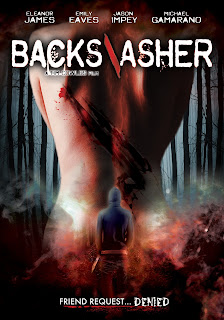 I liked Backslasher. It has that unashamed parochialism that I love in contemporary British horror films: parts of it are set in (and possibly filmed in) a Northampton Travelodge! Scary, sexy, stylish and solidly British, Backslasher is a cracking little movie which gives Tim Cowles an impressive debut feature, Ella James an overdue leading role and Jason Impey much-needed exposure outside of his own body of work.