Skinned Alive is the flipside of The Texas Chainsaw Massacre. Instead of some ‘normal’ folks driving along and meeting a house full of crazies, we find a family of psychos whose van needs repairing, forcing them to accept the hospitality of a nice middle-class community. But in terms of blood and violence - yes, it’s right up there with TCM.

Insane, wheelchair-bound Crawldaddy and her two inbred kids Phink and Violet like to catch and kill people and then turn their skins into leather jackets, although truth be told there’s not that much skinning in this film and those who do get skinned are pretty dead. But don’t let that trouble you - this is a gloriously entertaining slice of OTT low-budget violence (total cost: about $27,000), held up with some very competent gore effects. 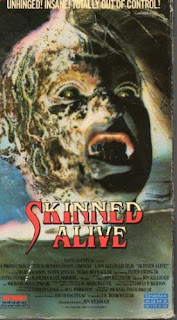 There isn’t a lot of story to speak of, but that’s because it’s a character piece - and what characters. Spiegel (Evil Dead II, The Dead Next Door) is a tour-de-force as the childishly inept Phink, swivelling between casual murder and incestuous designs on his sister, and Jackson (The Waltons!) is very funny as the insane Matriarch who makes her kids call her Daddy.

As usual, Tempe have absolutely packed this nicely remastered DVD. You get commentary from producer Bookwalter and make-up maestro David Lange, a 35-minute Making Of, various behind-the-scenes stuff and a half-hour sitcom episode from the same team, plus production artwork and other goodies. Tempe DVD always means value for money, in terms of both movie and disc, and Skinned Alive is no exception.

MJS rating: B+
Review originally posted before Novmber 2004
Posted by MJ Simpson at 21:52