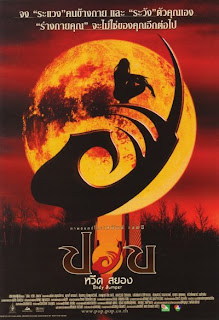 Body Jumper (originally Porp Weed Sayong) is one of those titles that worked its way into my consciousness enough for me to want to see it. I had seen the VCD around, had spotted mentions of it on various Thai cinema websites, and when I discovered that it was due for a Region 1 DVD release, it was clearly time to see what all the fuss was about.

Released domestically in late 2001, directly opposite the first Harry Potter movie, Body Jumper turns out to be an extraordinary combination of Thai horror flick and Hollywood teen comedy. In fact the producer calls it, “a Thai version of Scary Movie or I Know What You Did Last Summer.”

A prologue is set in the remote village of Sam Kotr in 1932, where a witch is captured by the locals. She hisses and screams at them and tries to fly away but she’s caught fast and a local priest defeats her by wrapping a magic rope around her. Seventy years later, a group of High School teens - with the expected raging hormones - arrive in Sam Kotr with a mission to boost the villagers’ health (“But we’re all pretty healthy...” says the village head man). An old drunk says the village is cursed by ‘Pop the liver hungry ghost’ but he is hushed up.

Among the male teens are cool Com, stoner Woo and outrageously camp wannabe ladyboy Belle. The girls include level-headed Pim, feisty but cute Fah and drop-dead gorgeous Gir. Com and Fah have a real love-hate thing going on. At night, the boys spy on Gir bathing in the river (fully clothed - there’s no actual nudity in this film) when they accidentally break open a sealed old well. Unseen by them, a glowing spirit flies out of the well and enters Gir’s body. 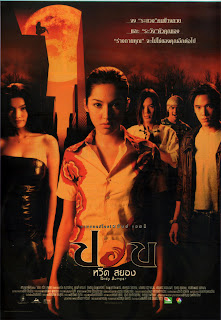 Back in the big city, Gir invites fat, specky geek Wisant on a date (a horror movie with English soundtrack, seen briefly but which I couldn’t identify). Making out in the car afterwards, she turns into a scary demon and sticks her hand through the car seat into his body. Wisant survives somehow but when his classmates visit him in hospital he’s lying in bed unconscious and yellow. The doctor says he has suffered liver failure due to not having a liver!

Com finds a book in the school library about the ‘pop spirit’ and in so doing spots a mysterious black guy with short dreadlocks. Meanwhile Woo goes to a restaurant with Gir where she orders nothing but liver; while he’s under the table allegedly retrieving a fork but actually copping an eyeful up her skirt, she cleans her plate in one go with a four-foot tongue! Back at Woo’s apartment, Com rings to say that Gir is definitely possessed by Pop and Woo should get out of there, something which Woo agrees with when Gir does her scary transformation thing: lots of pointy teeth, glowing eyes, wild hair, long fingernails, etc. Woo jumps down the fire escape and flees on a micro-scooter.

Using Gir’s body (and it’s undeniably a body worth using) Pop kills, or at least de-livers, more and more pupils and staff at the school, including a pervo bra-thief who wears the white mask and black costume from Scream. Com and Woo eventually persuade their friends when they follow Gir from a nightclub and see her pull a guy’s liver out through his arse - ouch! She spots and chases them, flying through the air and eventually cornering them in an alley. Suddenly another figure flies down and confronts her. It’s the dreadlock guy from the library, who blasts her away by - I am not making this up - inflating a condom until it bursts.

Dreadlock guy is called Kong and gives the teens another anti-Pop condom, with which they manage to defeat Gir/Pop, but when Kong examines Gir he says that the evil spirit has left her body and found a new host. About an hour into Body Jumper, the body jumping actually starts. Kong has a video camera which can detect if a person is possessed and - in a Men in Black rip-off/spoof/homage - a wall full of futuristic silver guns, with which he equips Com, Woo, Belle, Fah, Pim and ... the other one whose name I’m not sure of.

Next thing you know, the gang are jumping out of the back of Kong’s transit van dressed as Colonial Marines and go running into a fancy dress nightclub (really an excuse for some dance numbers). Kong stays in the van, monitoring the video footage to look for signs of Pop. 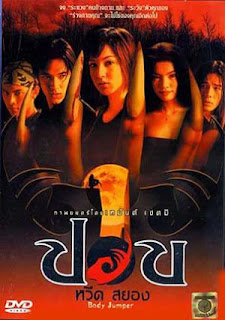 The rest of the film is a lot of chases and related set-pieces as the teens, in three teams of two, search for Pop who is jumping between bodies. There’s a fair amount of clambering around inside those big, metal, well-lit(!) air-ducts that real buildings don’t have but which the film and TV industry could not do without. The whole thing culminates with Pop possessing Fah, trying to seduce Com and then going the whole hog into full-on monster mode: rows and rows of teeth, saggy tits, grey skin - represented using a good CGI figure in long-shot and some fantastic, old-fashioned, Savini-esque prosthetic make-up in close-ups.

Body Jumper is very definitely not what I was expecting, based on previous Thai movies which I’ve watched. It’s much more like a Hollywood teen comedy; it’s actually more watchable than most of the films it strives to copy, but I don’t know whether that’s because it’s genuinely better or just the novelty value of seeing this style of film filtered through a different culture.

There are some genuinely funny bits in this film, and though the entire cast overact like mad that doesn’t seem to matter too much. Most of the humour relates to sex and/or bodily functions or just people being scared, and occasionally the comedy trips over into cartoon-style visual humour, such as a table lifting up in front of a boy when he sees a gorgeous girl (actually we get that gag twice). It is also packed with movie in-jokes/references: Scream, Men in Black, Aliens and probably a whole load of Thai movies which I didn’t recognise.

There is no nudity and the violence is seen only very briefly if at all and is often off-screen. But the effects are very good, especially the Pop make-up in its various stages (sometimes added via a CGI morph), and the flying shots. The stand-off in the alley is particularly well-lit and atmospheric, and indeed production values overall are very high for a Thai movie (production design is by Dusit Im-Oum, cinematography is by Ruengwit Ramasoota).

The English subtitles on this Thai VCD (which is packaged in a shiny, cut-out card sleeve and was bought from eThai CD) are generally very good, with only a handful of mistakes. One curious inconsistency is that the vengeful ghost is called ‘Pob’ in the subtitles but ‘Pop’ when seen written on-screen (on the book which Com finds in the library and on the condoms which Kong gives him). Of course, in some tongues (such as German and presumably Thai) B and P are pronounced the same. In the original title, most sources seem to agree, the word is pronounced ‘Porp’ anyway. 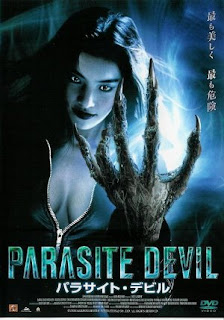 Porp/Pop seems to be a traditional form of ghost in Thailand, where there is of course a rich seem of supernatural folklore and ghost stories, though she is normally depicted as an old hag - as at the end of Body Jumper - rather than a fit babe like Gir. There was apparently a glut of really bad Pop movies in the 1990s - there have been at least ten films in the Baan Phee Porp series of horror anthologies - so the word came to mean generic Z-grade film among Thai film fans. But Body Jumper seems to have gone some way to making the character respectable again.

Body Jumper is very definitely worth checking out, either from this VCD or from the forthcoming American DVD from Pathfinder Pictures which will include cast biographies, trailers and a commentary.

Review originally posted before November 2004
Posted by MJ Simpson at 21:56