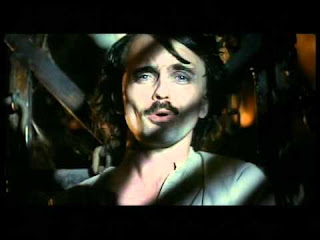 Edgar Allan Poe’s classic story has been adapted for the screen numerous times but rarely so literally and simply. Rob Green’s 18-minute film is basically one long monologue of an unnamed prisoner (hair and make-up designed to make him look like Poe himself) recounting the story, as written, to a priest.

But what could be a very static and frankly dull movie is turned instead into a tremendously atmospheric and creepy tale. The prisoner is shackled but the chains that hold him are very long and stretch across and around the cell. The silent Catholic priest (who we don’t even see until several minutes in) sits in a strange chair that looks both skeletal and insectoid. His scarlet cloak and hat are lit to look almost like the flames of hell.

As the prisoner becomes more animated, parts of the story - such as the discovery of an image of a cat on a wall - are enacted within the cell, with subsidiary characters entering from the shadows or appearing as required. It’s a daring conceit to open up the story at key points without ever leaving the cell set or the relentless monologue, but it works wonderfully. The title creature is only seen briefly, once, for no more than a second in a few frames of animation provided by, interestingly, Clive Dawson (who would go on to write Green’s feature debut, The Bunker).

Co-writer Clive Perrott carries the film, oscillating between terror and intensity in appropriately Poe-esque fashion, but I think the key to its success is the combination of Tricia Stephenson’s production design and Simon Margetts’ cinematography. Australian-born Stephenson was art director on Vadim Jean’s Clockwork Mice and also worked on some of the sets for Pervirella. Margetts was a camera operator on Mary Reilly, Project: Shadowchaser and Batman Begins.

David Kincaid (who was in the Doctor Who story ‘Warrior’s Gate’) is suitably stoic as the priest and Alison Morrow as the wife is the only other featured actor. Perrott (who is also credited as associate producer, along with Green) also starred in Green’s film The Trick. He has turned up in episodes of Casualty and Carman, apparently had some uncredited role in The Return of the King, has provided voices for various anime things and was in a stage production of The Haunting of Hill House. He was last heard of in the London cast of The Lion King where he was ‘standby Scar and Pumbaa’.

Released to festivals in 1994, The Black Cat was shown on Channel Four at Christmas 1995 and was subsequently included on the DVD of The Bunker. I bumped into Rob Green at Frightfest 2005 when he told me that he was working on the script for Dog Soldiers 2.