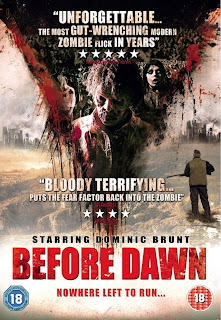 Who would have thought that the bloke who plays the vet in Emmerdale would be in two of the very best British horror films to hit the screen in 2012? Dominic Brunt has a small but very noticeable and enjoyable role as a chainsaw-swinging villager in Inbred, but he also stars in (and directed) Before Dawn, a zombie film which (rural setting aside) couldn’t be more different to Alex Chandon’s romp.

As a general rule of thumb, most BHR films fall into one of two categories, or rather I ask any new BHR picture to do one of two things: cheer me up or depress me. I like a good, over-the-top comedy like Inbred, but I also enjoy horror movies that are thoroughly bleak, grim and depressing. For some value of ‘enjoy’. Bleak, grim and depressing is what characterises the British Horror Revival. And Before Dawn certainly falls into this category.

Happily married couple Dominic Brunt and Joanne Mitchell play unhappily married couple Alex and Meg, dropping the kids off at her mother’s in order to spend a weekend together in an isolated country cottage. There’s a tension between them: she’s a workaholic, he’s unemployed - plus he had, at some point, an affair. Her mother doesn’t like him. This could be a chance to rebuild their relationship and save their marriage.

Before Dawn has a long, slow build-up, establishing these characters and their relationship - but revealing things only gradually, bit by bit. They loved each other once, clearly - and they believe they could love each other again, and right now they don’t dislike each other. There’s no animosity, but they are, at best, friends. We really get to know Alex and Meg, and to care about them - and indeed, to care about ‘them’ as well each character individually. We like them. We hope they will rekindle that spark, pick the kids up from Gran and become once again a happy nuclear family. 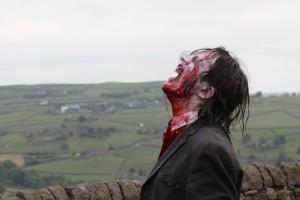 One thing I particularly liked about Before Dawn is that the isolation means we see very, very few zombies. No ravening hoards here. We’re at the end of a lane, in the middle of the countryside, some miles outside the hardly throbbing metropolis of Hebden Bridge. The undead are as sparse in this area as the living. But that doesn’t affect the horror or power of the film. Brunt and Mitchell (who developed the story after a debate over what really mattered in a good film) have rather wonderfully gone back to basics. You don’t need an army of zombies to create real horror, you just need one maniacal berserker, impervious to pain, trying to take a bite out of you.

Meg is bitten, and falls ill, and Alex must care for her. A relationship always becomes closer when the caring bonds tighten through illness, injury or some similar negative outside factor. But with the phone down, no TV or radio, Alex is alone and confused. How can Alex care for his wife as she rapidly deteriorates - then turns violent and dangerous?

Undoubtedly a zombie film, Before Dawn nevertheless isn’t a film about zombies. The best zombie films aren’t about zombies. Romero’s certainly aren’t. A good zombie film uses the horror tropes to illuminate human truths. In this case, the film is about a broken marriage (a theme also explored in London Voodoo, albeit quite differently). And by the second half of the picture it’s a film about that most painful and horrific of relationships: love for someone who is trying to hurt you.

Although primarily a two-hander, there is a third character, Stephen (Nicky Evans from Shameless), a rather unpleasant bloke who turns up from nowhere seeking sanctuary and tries to explain to the sweetly straightforward Alex what is going on. The contrast between Alex and Stephen is the core of the third act - and it’s abundantly clear to us that, whatever may have once passed between Alex and Meg, these are two good people who should have worked things out better because either could have ended up with a Stephen (or a female version thereof). The conclusion to this third act is genuinely shocking and leads into the sort of sad, bleak, nihilistic epilogue that every serious zombie film needs.

It almost goes without saying that the the two leads are wonderful in their performances, their real-world relationship undoubtedly helping to provide a sound footing for their fictional one. Evans, who was in Emmerdale on and off in the late 1990s, provides stirling support, as does Eileen O’Brien, a veteran TV actress who has been in loads of stuff (including a few Emmerdales) although the closest she has ever got to horror was the Jeremy Brett Sherlock Holmes episode ‘The Last Vampyre’. 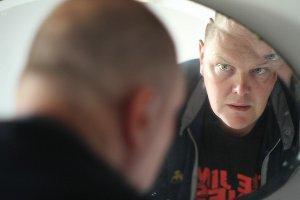 The end credits of Before Dawn look alarmingly like my address book in places. Marc Price (of Colin fame) is the guy who persuaded Dominic that he could actually make this film himself, and acted as executive producer, while Helen Grace of Left Films was the actual producer. Gorezone editor Bryn Hammond is one of the zombies right at the end, and Tony Earnshaw provides some of the zombie screams.

The all-important bites’n’blood prosthetics were provided by ‘2 Baldies FX’: Darren Grassby and Ian Jowett. Grassby (who had a ‘creature teeth’ credit on Evil Aliens!) also plays one of the featured zombies. Make-up artist Hannah Mallatrat is the daughter of Eileen O’Brien (and the late Stephen Mallatrat, who wrote the stage adaptation of The Woman in Black). All three provide sterling work: realistic and credible make-up based around not just the violence of zombies but the illness of becoming a zombie.

Particular kudos should go to DP Alex Neville, who not only does some lovely exterior landscape work but also quite brilliantly photographs a terrifying sequence in which Alex is attacked by a zombie (David Nolan, who gets a credit for ‘movement choreography’) in the cottage’s garage. This is a small garage almost entirely taken up by a Land Rover; Alex and the zombie - a ball of pure, animalistic, psychopathic rage - scramble around, over, under and through the car in one of the tensest and most exciting self-contained sequences you’re ever likely to see in a zombie flick. When so many big-budget films screw up their action sequences royally (and a big budget film, let’s face it, would simply have a garage set with fly-away walls) here is How To Do It. Amazing work by all involved. 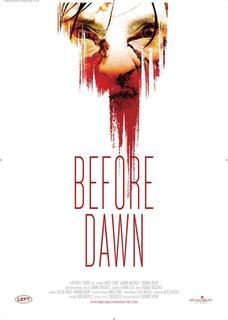 Of course a good film can only ever be made out of a good script and this one’s a belter, ably fashioned by novelist/Emmerdale scriptwriter Mark Illis, making his feature debut.

It’s really hard to find fault with Before Dawn. The best I can manage is that a twist at the end is explained by an earlier plot point which, despite subsequently being shown in flashback, passed me by until Jo Mitchell explained it in the post-screening Q&A. But possibly that’s just me.

So really, this is close to being a perfect British zombie film. It’s worthy of inclusion alongside the likes of I Zombie, Dead Creatures, The Zombie Diaries and Colin: solidly and defiantly British. The action here is exciting, the character stuff is powerful and ultimately heart-breaking. There is a sincerity to Before Dawn that seeps out of every frame. Like the man (almost) says on the TV ad: good honest horror from Yorkshire.