Made during the Second World War but set during the First, this insanely complex spy thriller packs more double crosses, double bluffs and double agents into its sixty minutes than most full-length features can manage in twice that time.

Karloff is Valdar, a battle-scarred French veteran serving as valet to Government minister Arthur Bennett QC, played by that great British character actor Holmes Herbert (The Invisible Man, Ghost of Frankenstein, Mark of the Vampire, The Mummy’s Curse, The Undying Monster, Bulldog Drummond Strikes Back, Sherlock Holmes and the Secret Weapon, Mystery of the Wax Museum, the 1931 Dr Jekyll and Mr Hyde). Boris gives it the full welly, with a bayonet scar across his cheek (courtesy of the ubiquitous but uncredited Perc Westmore), a stoop and a limp.

Into Bennett’s household comes Frances Hawtrey (Margaret Lindsay: a 1947 version of Seven Keys to Baldpate and Nikki Porter in a series of 1940s Ellery Queen movies), recovering from the horrors of a German internment camp. However, we have first seen her as ‘Helen’, a nurse in a British field hospital in France where she tended to Bennett’s son Frank (Bruce Lester, also in early Hammer thriller Celia), an RFC pilot who was shot down when he tried to pick up a British agent from behind enemy lines. Frank was one of many victims of a spy somewhere in the British HQ who is communicating allied plans to the Germans. 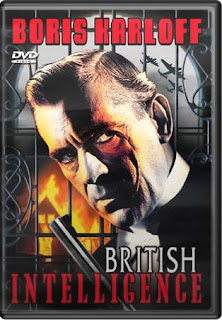 In fact it transpires that Arthur Bennett is surrounded by German agents, including his milkman (Clarence Derwent) and his secretary at his legal chambers (Louise Brien, also a secretary in The Invisible Man Returns). It gets to the point where there seem to be more covert Germans in London than Londoners, and it makes one wonder why the enemy needed to send yet another spy to join them all. Miss Hawtrey’s cover is blown when one of Bennett’s colleagues notices that his secretary is communicating to her by using a Morse-style code on her typewriter.

However, Miss Hawtrey is not arrested straight away as the ultimate goal is to find the German master spy Strendler. Nobody knows who he is, not even Valdar/Schiller, although it doesn’t take too much brain for the audience to work out that Schiller probably is Strendler. A trap is set for Miss Hawtrey using a man pretending to be a German spy named Kurtz (the real one having been arrested) but she ‘betrays’ ‘Kurtz’, thus proving her loyalty.

A plan is hatched by the vast network of German agents who populate the film to blow up the entire British cabinet when they meet at Bennett’s house, but things become slightly more complex when Frank arrives back from the front and recognises ‘Frances Hawtrey’ as ‘Helen’ the nurse he fell in love with while recuperating in the field hospital at the start of the picture. 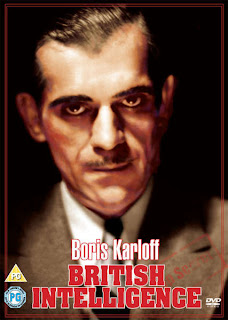 British Intelligence, a Warner Brothers picture which was retitled Enemy Agent in the UK, is an hour of sheer Karloff-ian brilliance and stiff-upper-lip fun. Set in 1917, just after America finally got round to entering the war that had been ravaging the rest of the world for three years, it includes a scene of American troops marching past the Bennett house in order to give US audiences an interest in the outcome. Though set during WW1 the film is really about WW2, which the United States was still abstaining from joining in 1940 of course. Many Americans thought that their country should be getting involved and this is in many ways a propaganda piece to make audiences sit up and pay attention to what was happening in Europe.

The film also features some great flying sequences, presumably stock footage, and lots of explosions, some on set, some in stock footage and some in amazingly good effects sequences using miniatures which predate similar blowing-stuff-up scenes in Thunderbirds a quarter-century later. A lot of these explosions happen during something which I have never before seen depicted on film: a full-on Zeppelin raid with a fleet of giant airships floating menacingly over London dropping death and destruction from an unassailable height.

Screenwriter Lee Katz adapted the 1918 stage play Three Faces East by Anthony Paul Kelly, previously filmed under its original title in 1926 (with Clive Brook as Valdar) and 1930 (with Erich von Stroheim as Valdar!). Katz also wrote The Return of Dr X, notable as Humphrey Bogart’s only horror credit, and had a second career as an assistant director, in which capacity he worked on Mystery of the Wax Museum, The Adventures of Robin Hood and Casablanca. Director Terry O Morse started out as an editor in the 1920s but remains best known today as the director of the American footage in Godzilla, King of the Monsters. 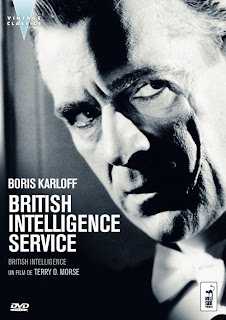 Also in the cast are Leonard Mudie (Professor Pearson in The Mummy), Leyland Hodgson (Ghost of Frankenstein, The Invisible Man’s Revenge, Terror by Night) and Lester Matthews (Werewolf of London, The Raven, Son of Dr Jekyll and Nayland Smith in the 1950s Adventures of Fu Manchu TV series).

British Intelligence was released in the UK in 2004 on a bargain basement triple-bill DVD with the Walter Matthau picture Gangster Story and the Humphrey Bogart classic Beat the Devil. The image is slightly soft (presumably it comes from a VHS master) and is a little speckled and crackly in places, but not sufficiently so to mar one’s enjoyment of this terrific B-movie.