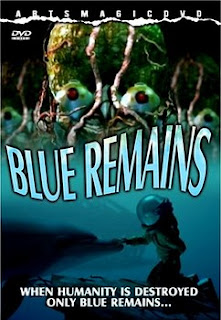 The first CGI-animated release on Artsmagic’s Eastern Cult Cinema label was Malice@Doll, which effectively used the restrictions of the medium (yes, assuming you’re not Pixar or Dreamworks, there are restrictions). Its tale of robotic love-dolls becoming human in a post-human world took advantage of the stiffness and artificiality of the animation. Most importantly, it had a well-written and imaginative script.

Sad to report that Blue Remains is simply Another Crappy Anime that just happens to have been made with computers instead of cells. Like pretty much every other anime ever made, it has almost no plot, it limits its characterisation to giving people different hairstyles, and 75 per cent of the dialogue is just one person saying another person’s name. A lot of effort has gone into designing all the vehicles, but somebody forgot about the script.

We open on a spaceship which is carrying a married couple and their four-year-old daughter Amamiku to radiation-riddled Earth with a handful of seeds to ‘terra-home’ the planet. As they approach, they see nuclear explosions, so the war is still going on. Good timing. (There is no explanation of where this family and these seeds have come from.) 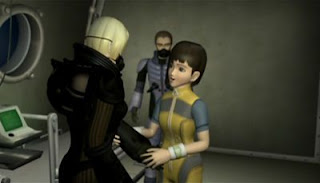 The spaceship crashes in one of the ‘less radioactive’ oceans and we cut to a caption (only easily readable by freeze-framing) saying it is 90 years later and humanity has built the undersea city of Bachisfare. Amamiku is now fourteen and still living on the crashed spaceship, her parents having died after putting her in stasis, from where she emerged ten years ago. Her companions are a small robot called Pyron and a computer called Mayzamik. In the manner of these things, though 14 she has the body of a 16-year-old and the face of a 12-year-old.

This is all very confusing because it emerges that Amamiku has never seen another human being, so what was that about an undersea city? Anyway, that’s as far as the plot goes before becoming one long chase sequence. There’s a submarine crewed by a guy called Malloz, three companions and a robotic dolphin called Kail. They rescue Amamiku when she strays too far from her home, then take her back there, pick up the seeds, and head for Bachisfare.

All the while they are fending off a giant leviathan (organic? robotic?) called Glyptofane Sex(!) and hundreds of small robots called Gadoms. Because this is anime, we are never told what these are, where the come from or why they’re attacking the sub. The ‘plot’ becomes a tedious series of one escape after another from Glyptofane and/or the Gadoms (which may or may not be working together). Not even interesting or clever escapes, just go-as-fast-as-you-can escapes. 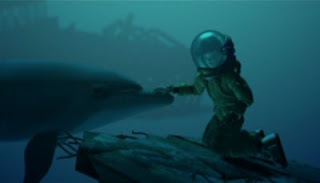 Every so often we cut to a disembodied brain with eyeballs who rants on about being ‘the enforcer of absolute law.’ There are three, well, they appear to be entire human nerve systems hanging in jars, who converse with this brain, calling it and each other ‘brother.’ At the end, the brain turns out to be attached to a giant slug inside the Glyptofane Sex thing. Finally, Amamiku and Malloz reach a giant cavern and the warmth from the girl’s body causes the seeds to germinate whereupon they grow into a giant beanstalk.

What a load of bollocks. Whereas Malice@Doll held interest for even me, this is unwatchable to anyone except those undiscriminating souls whose shelves are full of tapes called things like Super Devastation Mecha 23 Delta Part 4. An hour into the film, I found myself noting that I still did not know who any of these characters were, what they were doing or why they were doing it.

Nor is the animation much to write home about. Don’t expect the standards of movies like Final Fantasy or Ice Age, that would be too much. But don’t even expect the standards of motion-capture TV shows like Roughnecks or Dan Dare. This is stiff, crude animation that’s only one step above such low, low budget fare as Dominator and Alibaba - and has none of their charm. The characters, with their roughly jointed limbs, lack of facial expression and overall, shiny plastic appearance look like nothing more than action figures straight out of the packet.

If you’re one of those people who for some reason enjoys anime, then you’re probably already seething at this review. Well, go find a review on an anime site, where different standards of scriptwriting and direction apply, and they’ll tell you whether this is any good based on your shared criteria. For the rest of us, while I would still recommend Malice@Doll as an interesting piece worth seeing, I’m afraid that Blue Remains is just a waste of 77 minutes of your time. 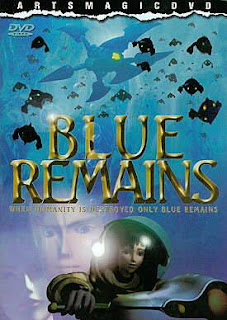 Actually, the film itself is only 70 minutes long, followed by a five-minute(!) end title sequence - which plays over genuine undersea footage far more watchable than anything that went before - and then a two-minute epilogue which is just a shot of a beach. Hello? Anime expert Jonathan Clements provides a commentary track which is probably very informed - he knows his stuff - but I haven’t heard it because I didn’t have another 77 minutes to waste. There are filmographies for the director and designers (in a strange font which is not terribly readable) and a featurette called Final Fantasies which turns out to be Clements again; a filmed record of a talk about Japanese computer animation (presumably the one he gave at the 2003 London Sci-Fi Film Festival). Oddly, although it was released in 2002, the film carries a 2000 copyright date.

It pains me to criticise a well-meaning release like this, but I would be failing in my duty if I didn’t point out that, like the vast majority of anime, Blue Remains makes not the slightest bit of sense and seems to think that pretty or clever designs can make up for a lack of plot and bland characterisation.

NB. Do not ever, under any circumstances, try to persuade me that anime (or even some anime) is actually really good. I’ve seen it, it’s bobbins. And what makes it especially bobbins is the obsessive anime fans convinced that everyone else should know how wonderful it is.