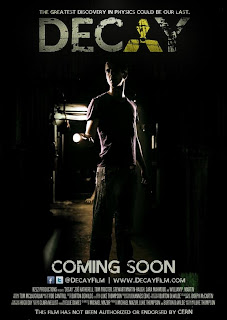 Ever been somewhere and thought: whoa, this would make an awesome location for a horror movie? Luke Thompson thought just that while he was completing his PhD in physics. And where was he completing that degree? Only at CERN, that’s where. CERN: the massive particle physics facility on the Franco-Swiss border which was already legendary among science geeks even before they switched on the Large Hadron Collider and started looking for the Higgs Boson.

The LHC is massive. The whole thing has a circumference of about 17 miles, ranging in depth between 50 and 175 metres. And obviously it has miles and miles and miles of service and access tunnels. And it was these tunnels that made Thompson and his pals think: what if? What if there was a zombie outbreak?

So in 2012 came the announcement that these physics postgrads had made a feature-length zombie film, neatly entitled Decay, which had a single screening at Manchester University before being freely distributed across various web platforms. 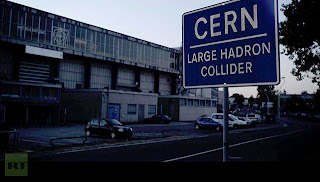 Decay turns out to be rather good. I mean, it’s no classic, it’s thoroughly generic, and the acting is uniformly okay-ish. But we have all seen far, far worse zombie films than this. More to the point, this is a terrific advert for science. This is a film written and directed by scientists, in which scientists are played by scientists. And you know what? They’re just like normal people. Except that they have very, very cool jobs.

We all know how stupidly films portray scientists, and always have done. They’re ‘mad’, they’re ‘crazy’, they’re ‘insane’, they’re obsessed, they have a bad hair day every day, and they never go anywhere without a lab coat and a bubbling test tube.

No, they’re not and no, they don’t. I work with scientists every day at Leicester University. I used to work in science myself as a callow youth (it was a hospital biochemistry lab, not a particle accelerator, and I was one step up from a bottle-washer, but the point remains). Stereotypes are just that: stereotypes. ‘Scientists’ are no more a cohesive, distinct group than shop assistants or accountants or nurses or farmers or train drivers or milkmen.

So for that reason alone, for its depiction of real scientists, Decay is to be applauded. Plus it is actually rather good and eminently watchable. I was never at any point bored or annoyed, and there are fewer and fewer films nowadays where I can say that with hand on heart. 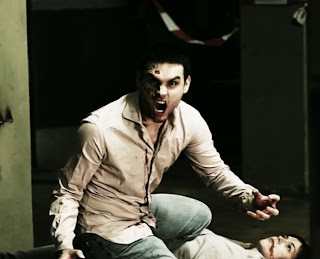 The basic plot here is that there’s a problem with the LHC and it’s off-line while an inspection team goes in to sort something out. Four young folk volunteer to staff some sort of control room for the night, which needs doing but should be just eight hours of boredom on account of the whole thing being off. Three are physicists, one is an engineer (he’s the brother of the female physicist) who brings his new girlfriend (a nurse) along for the evening. And so they settle down to doing not much: reading, working on laptops etc.

But then: something goes wrong. The LHC somehow switches itself on - with people inside! Which shouldn’t be able to happen. Communications are all down (no mobiles of course, because they’re underground) and, after switching stuff off and activating back-up power, the quintet set off a for a long walk through the tunnels. Which is when they start getting attacked by zombies.

I really liked this film.

The three main people behind the project seem to be Thompson (writer/director/producer; recent paper: 'Integration with the LHC of Electron Interaction Region Optics for a Ring-ring LHeC'), Michael Mazur (co-director/producer, who has worked on a few indies in the States and once accidentally swallowed liquid nitrogen(!); recent paper: 'Measurement of the ZZ production cross section and limits on anomalous neutral triple gauge couplings in proton-proton collisions at sqrt[s] = 7 TeV with the ATLAS detector') and Burton DeWilde (editor/producer; recent paper: 'A search for leptoquarks with the ATLAS detector'). 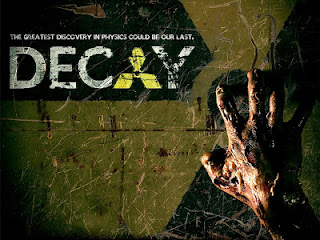 And if you think those paper titles sound interesting, check this one out.

So far, Decay seems to have caused more of a stir in the scientific community than the among the horror crowd. And yes, truth be told, we’ve seen everything here lots of times before, just in less interesting locations. But here’s what occurs to me: these folks made a very watchable, competent feature film while also doing research into particle physics. I’m just wondering how many media production students out there could research subatomic particles while also making their degree project...

Decay is cool and it’s available to watch online for free and I recommend you check it out.