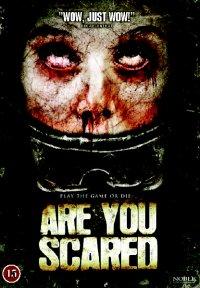 I have never seen Saw. Actually, let’s try and have fun with this. I did not see Saw. I did not see Saw II too. Erm, or the third one. (That didn’t really work, did it? Never mind.) But from what I know of the franchise it seems to safe to suggest that Are You Scared owes its existence in large part to the success of the Saw films.

I have no problem with that. As I have observed on previous occasions, lower budgeted films have been putting their own spin on the stories and ideas of bigger budgeted films since at least the 1950s. At its most unsubtle, you get something like Snakes on a Train or Kannibal but those are the extremes. Often the B-movies that follow in the wake of the blockbusters are fun little films in their own right - and such is the case with Are You Scared.

As I say, I haven’t seen any of the Saw films so unlike other reviewers I cannot comment on how similar or different this picture is. In fact that last sentence is the final mention of Saw in this review (apart from that one). Let’s just say that Are You Scared is part of the current trend of torture-horror and leave it at that.

The film kicks off with a young lady, Tara (Madison Petrich), her hands shackled behind her back, having to negotiate a puzzle in order to free herself (she also has some sort of collar with spikes and lights which I think is designed to provide encouragement). She has to hit two buttons in order within a specified time-limit, but in her situation all she can use is her forehead and there’s a little matter of some broken glass and a tank of water.

This prologue hasn’t got a great deal to do with the rest of the film but it’s a pleasantly gruesome and shocking opener which doesn’t drag on.

Detective Jay Bowman (Eric Francis) and FBI Agent Christine Robison (voice artist Jennifer Cozza) are the mismatched law enforcement couple investigating what is left of Tara. Evidently, the crazy guy behind this has struck before and they know he will strike again. And indeed he does... 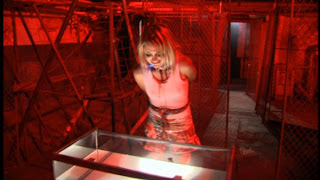 As our main story begins, six young people find themselves regaining consciousness in an old building, none of them certain how they got there (we never do find out). Popular spoof newspaper The Onion sells a T-shirt with the slogan ‘stereotypes save time’ and that’s certainly the case when you’re making a movie on a relatively low budget for a potentially impatient sector of the film-watching audience. So we have Brandon the stoner (Brad Ashten: Scarred, Harvest Moon), Laura the tarty bimbo (Carlee Avers, who was a nurse in a 2004 version of Jekyll and Hyde), Kelly the broody, serious girl (Alethea Kutscher, an alien in something called Fractalus), and twins Dylan and Cheri (Soren Bowie and Erin Consalvi). Oh, and Jason the funky hip Token Black Guy (Kariem Marbury).


In a nod to another popular recent subgenre (albeit one that’s on the wain somewhat), reality TV is involved with the set-up. All six young people had submitted video auditions to a reality show called Are You Scared and they realise that this explains their situation - especially as there are CCTV cameras all around the place. Kelly, as the token sensible one, does try to argue that you can’t just be kidnapped and end up on TV, certainly not without signing some sort of contract or waiver, but the others are too excited to pay her much heed.

Of course, they’re not on TV. All those cameras are being watched only by one creepy guy, somewhere in the building (or possibly another building) who obviously has a lot of time on his hands, serious mental health problems and a cheap local supplier of coaxial cable.

One by one, the ‘kids’ are separated. Behind locked doors, each willingly submits to a challenge based around their greatest fear (they had to state this on their submitted video which is played to them on a big screen just beforehand, further cementing their belief that they are on TV). Of course, once the deadly nature of the challenges becomes evident, each young person quickly realises that something else is going on - but by then it’s too late.

I won’t describe the inventive tortures - as they are the film’s main selling point - but I will say that the joint torture for the twins, wherein each can only survive by allowing their sibling to die, is particularly unpleasant and clever. 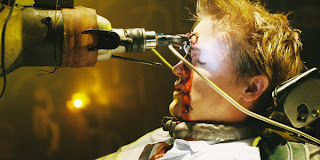 Intercut with all this are the investigations of Bowman and Robison who get a lead when they find a shipment number on the glass tank from the prologue. Needless to say, the villain turns out to be more than just some random wacko and so there is sort of a motive, although I don’t think it’s one that would stand up in court.

Also in the cast are Amy Lyndon (Horror High, Signed in Blood), John Jolly/Joly (who was in that recent silent version of The Call of Cthulhu - if it’s the same bloke), Brent Fidler (Grim Reaper) and veteran actress Patricia Place (Prey of the Chameleon, Scanner Cop II, House of the Dead 2 and a semi-regular on The Weird Al Show!)

Are You Scared is, remarkably, only the third film that Andy Hurst has directed in ten years. He made his debut with the rarely seen but hugely impressive ultra-low budget SF movie Project: Assassin and followed that with the comedy thriller You’re Dead, which starred John Hurt and received limited domestic theatrical distribution. Since then he has been concentrating on screenwriting, seemingly specialising in sequels that have no real connection with the original. He wrote Wild Things 2 and 3, Vampires: The Turning (a second sequel to the John Carpenter picture) and Single White Female 2: The Psycho. He has kept his directorial hand in by shooting second unit on The Baby Juice Express and House of the Dead 2 for his brother Mike, who returns the favour here.

Producer Michael Feifer knows a thing or two about sequels, having overseen some of the later entries in the never-ending Witchcraft series for his executive producer brother Jerry. His other 30+ films include such off-the-peg titles as The Seductress, The Butcher and The Graveyard. I can’t say I’ve ever seen a Michael Feifer film before - or indeed met anyone who has - but whatever he’s doing, he’s clearly doing it right. (Oddly, or possible cost-effectively, he doubled as 1st AD on this and other films.) 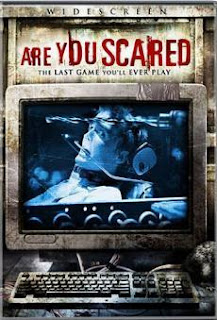 Other notable names in the credits include editor Robin Hill (Andy's co-director on Project: Assassin, who also cut Mike's Pumpkinhead sequel), costume designer Gina Hendrix (who also worked on Dr Moreau’s House of Pain, Big Bad Wolf and the Day of the Dead remake) and special effects make-up artist Tom Devlin who worked for Lloyd Kaufman on Poultrygeist, as well as contributing effects make-up to Daredevil, Halloween Night, Club Dread and something called The Gay Bed and Breakfast of Terror, which wins this week’s Oddest Thing I’ve Typed award.

Torrence Hall - who works primarily as an armourer on things like Trancers 6, Leprechaun: Back 2 tha Hood, Curse of the 49er, House of the Dead 2 and Snoop Dogg’s Hood of Horror - gets the ‘special effects’ credit. The actual armourer on Are You Scared is Mike Tristano, who seems to have worked on most of the films that Torrence Hall has worked on, plus others stretching back to the early 1990s, including Leprechaun 2, Mirror Mirror III, William Mesa’s Terminal Force, Project Shadowchaser 3, Vampirella, Mind Breakers, Casper: A Spirited Beginning, Watchers Reborn, Blood Dolls and Jeepers Creepers 2.

I found Are You Scared to be good, solid horror entertainment. Despite the extreme nastiness of some of the set-pieces, they don’t come across as gratuitous or overly sadistic. There are some real shocks but the film never resorts to cheap cat-scares. And the denouement makes some kind of sense while including some genuine surprises about who lives and dies.

This is the acceptable face of torture-horror, harking back to the early 1970s gleeful nastiness of Amicus or Pete Walker, possibly due to the nationality of its director/writer. The acting, effects and design are all good; none of the characters are completely stupid; and at under 80 minutes it doesn’t outstay its welcome. I enjoyed it.