Breakfast with the Colonel

Here’s a 1984 for the slacker generation. In the near future the United States has broken up for some unspecified reason (there’s a hint at a possible nuclear strike on Washington but it must have been very localised). In Pacifica Province, across the bay from San Francisco, a military regime headed by the mysterious Colonel Mach holds sway over a ‘perfect’ society. The Colonel’s face is everywhere on posters (which read ‘Watch it, buddy’) and he presents a daily TV show, Breakfast with the Colonel.

Jobless slacker Jack Sorenson argues with the uptight old lady across the road, leading to his arrest for going overdrawn. He is declared ‘lifestyle dysfunctional’ and given advice by a social worker who wears hippy dresses and is oh-so-understanding. Forced at gunpoint into a mindless job assembling cardboard boxes, with an implant in his arm so the militia can track him, he goes on the run, seeking a freedom fighter who had contacted him previously. 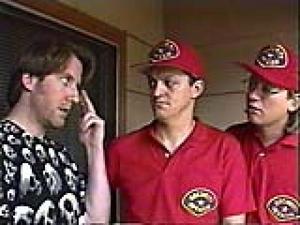 Black humour, exciting chases, a rather gruesome climax and an unflinching satirical sideswipe at the white-picket-fence American dream make this an enjoyable and thought-provoking movie. Shot in 1994 on hi-8 video and in post-production for the next seven years, this low-budget labour of love nevertheless looks thoroughly professional. There are some neat website/videophone graphics and nice production design, the performances are generally very good, and both script and direction are excellent. Watch out for a picture of JR ‘Bob’ Dobbs on the wall and a copy of Filmfax on a table. Well worth a look.

Review originally posted before November 2004
Posted by MJ Simpson at 14:17