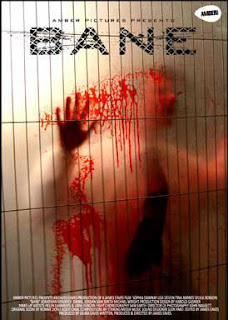 Bane is one of the most anticipated British indie pictures of recent years; several other film-makers have commented to me how much they’re looking forward to it. Well, here it is, landing on my doormat a couple of days after the cast and crew screening and a few days before the public premiere in London. And while it has its flaws, this is an impressive, original and skilfully crafted piece of sci-fi cinema.

Yes, it’s SF. Well, it’s a horror movie too. There’s plenty of blood, but the rationale behind it all is pure science fiction.

I don’t know whether a term has ever been coined for the subgenre that involves a bunch of strangers waking up in a mysterious place with no way out and no idea how they got there. I suppose Cube is the most famous example and Aquarium possibly the most recent one. Although we have a prologue showing four women being forcibly sedated, Bane effectively starts when they awaken, not just unsure how they got there but shorn of all memories, even their own identities.

All they have are name-tags on their wrists, identifying the level-headed, assertive one as Katherine (Sophia Dawnay: Rock Rivals), the nervous, weak one as Elaine (Sylvia Robson), the sympathetic, meek one as Jane (Lisa Devlin) and the bolshy, aggressive one as Natasha (Tina Barnes: A Day of Violence). They are dressed in simple, plain clothes, they each have a camp bed and they are in some sort of secure internal area. A six-foot high metal fence surrounds them, shadowy figures glimpsed behind the opaque sheets fastened to it. There is a locked door in one corner and an area curtained off with a toilet and shower. And there is a clock, which will become significant. 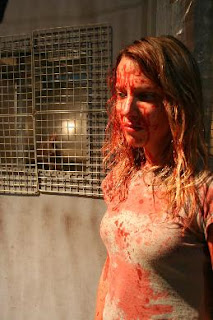 They don’t know who they are, where they are, why they’re here or how they got here. The only people they see, apart from occasional silent, masked workers, are a young fellow and an older bloke in a lab-coat. The latter, eventually named as ‘Dr Murdoch’ is played by the curiously lipped Daniel Jordan (who was in Elisar Cabrera’s first two features, back in the 1990s, Virtual Terror and Demonsoul); the former, unnamed and credited only as ‘the handsome man’ is played by Jonathan Sidgewick (The Witches Hammer, Man Who Sold the World). One by one, the women are taken to another room in the complex and interrogated while hooked up to a small machine. Of course, they are unable to answer any questions and at the end they can ask one question but the answers they get aren’t much help.

Things rack up a gear when Jane, unable to sleep, sees a frightening figure enter the prison room in the middle of the night and stab Elaine. Is it a nightmare? Apparently not as, the following morning, Elaine finds a four-figure number carved into her skin (which, truth be told, doesn’t really fit with the rather violent attack which we, and Jane, witnessed). The following night Jane sees the figure, who is dressed in blood-stained surgical overalls, return and brutally murder Elaine.

Now we’re in horror movie territory rather than just existential fantasy, although it is with the next violent death that things really get going. I can’t say too much more about the plot without spoiling it except to say that extraterrestrials are involved in some way. Quite a surprising way actually. And all credit to the production for commendably showing us enough of an alien to make us see that it’s non-human (and rather scary) without showing us the whole thing. Also, several people get covered in a lot of blood at various stages and some of the deaths are astonishingly brutal without either the character or the director revelling in any sort of sadism. 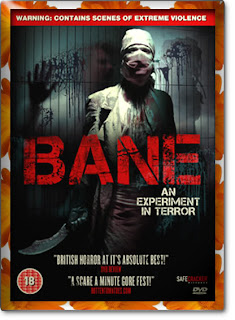 That said, the explanation - when it does come - is not wholly satisfactory. Partly because it doesn’t entirely make sense, certainly in terms of many of the details of what the women have been subjected to. For example, it is stressed that the ‘experiment’ specifically required four women, not three, but it’s difficult to see why that is. Also, we’re given too much of an infodump at the end rather than being drip-fed clues throughout the film which finally make sense with the climactic revelation. And finally, some of the explanation is presented in the form of a video shown to the survivor(s) which explains basic recent history that they would know if they hadn’t had their memories wiped. That sort of thing, apart from being a bit of a cop-out structurally, always irritates me because it’s like somebody in a 1950s-set story watching a newsreel that explains that the leader of the Nazis was a man called Adolf Hitler who had a small moustache. You just think: who made this documentary and who did they expect to watch it?

I can understand how the results of this ‘experiment’ achieve what Dr Murdoch and co are setting out to do but I can’t see any reason why they would know that these things would happen if they did this, nor why they have to do it in this particularly odd way. For example, there doesn’t seem to be any reason for the women to be kept behind the metal fence - which gives some sort of psychic shock if they touch it. Yes, it’s a cool-looking and undoubtedly cost-effective set that James Eaves and production designer Harold Gasnier have put together - but in narrative terms, there’s no reason for this complicated set-up when they could just be locked in a large room. (Gasnier, who played Le Cardinale in The Witches Hammer, is primarily an actor and here also shares a ‘creature design’ credit with Beverly Webb. He also directed The Demon Within.)

I’m also a little surprised that the women make no attempt to escape. I would have tried stacking the beds on top of each other or something like that. This quartet seems to just accept their imprisonment with varying degrees of anger and resignation.

But that’s the film’s biggest strength: it’s a film about characterisation more than plot. Although it is bloody in places - the screener disc came packaged in a blood-soaked cloth pouch, which was a nice touch - Bane really is existential fantasy at heart. 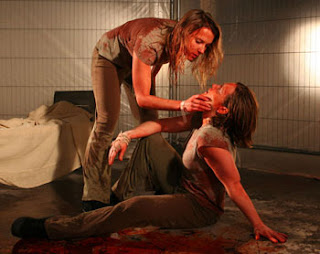 I’m reviewing a screener rather than the released version so ithere may be further editing work to do as the film is simply too long at 115 minutes. A small film like this needs a very good reason to go above an hour and a half, maybe a hundred minutes tops. That shocking second death mentioned above comes at the halfway mark and it should really be the transition between the first and second acts so about twenty minutes or so could (and in my view should) be snipped from the early scenes.

I’m all for a slow build-up, exploring characters and the situation in which they find themselves. The trouble is that, when your characters are empty vessels who don’t even know themselves and your situation is an unexplained, featureless environment, you don’t really have that luxury. Because we are told so little about what is going on at the start, we don’t need to take so long being told it. While I’m being picky, there are a couple of inconsistencies in the door, which is normally soundly locked but later left open, and the clock, which is broken but later reappears.

Those are the weaknesses of Bane but they are, in this reviewer’s humble opinion, more than compensated for by the film’s strengths, not least a fine script and terrific direction by James Eaves. All four actresses are good although the two speaking male actors aren’t given much to do, to be honest. But the standout performance here is Tina Barnes who turns Natasha, a role which could have been a stereotypical, one-note angry bitch, into a superbly realised, fully-rounded character. This is simply one of the best acting performances I have seen in a new British horror movie since I started writing professionally - what, thirteen years ago.

While Katherine, as the natural leader, seems the more central role, Natasha is a fascinating character with an extraordinary amount of depth for one so - by necessity - sketchily written. The transformations she goes through as events progress are thoroughly believable and drag sympathy from the audience for a character who, on the face of things, seems fairly unsympathetic. By anybody’s standards, that’s an impressive bit of acting.

Barnes was the wife of Jonathan Sidgewick’s character in The Witches Hammer and was also in Darren Ward’s short Nightmares. She can be seen in Hellbreeder, Darkhunters, Cold Earth and A Day of Violence and is definitely someone I will be watching out for in future. 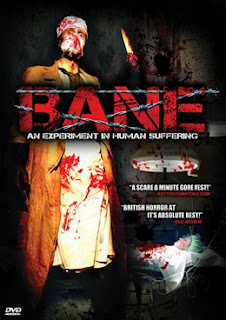 Four concept artists are credited on Bane: Rikin Parekh (who did storyboards for Jake West’s Pumpkinhead sequel), Sam Smith (also fight choreographer), Charlotte Thomson and John Hatcher. Cinematographer John Raggett’s CV includes not only Eaves’ films and those of his former co-director Johannes Roberts but also Nature Morte, Nightmares, A Day of Violence and John C Evans’ The Last Blood Line - which also stars Jonathan Sidgewick. Ronnie Doyle (Until the Sun Goes Down, 2.0) composed the commendably effective score. Glen Yard, who was ‘post-production sound designer’, also worked on The Witches Hammer and Freak Out and got a gag credit as ‘UFO wrangler’ on Evil Aliens.

Bane is a brave, serious, ambitious and on the whole successful attempt to do something different. It’s very easy to make yet another film about zombies, vampires or serial killers but (non-comedy) British science fiction pictures have always been relatively few and far between unless you stretch the boundaries of the definition to an unfeasible extent. Bane is a more mature picture than The Witches Hammer and certainly not a fun film in any way. In fact, towards the end it gets pretty bleak indeed.

So the start goes on for a bit too long and the culmination is a bit too quick (and doesn’t really make sense) but, inbetween, the meat of the film is a hugely impressive psychological character study which I can thoroughly recommend.