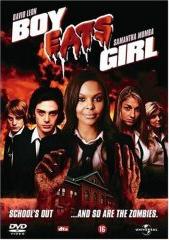 A year or so after Shaun of the Dead, there was another rom-zom-com which didn’t make such a splash but it's good fun anyway and eminently watchable. Filmed on the Isle of Man, Boy Eats Girl is an Anglo-Irish co-production and isn’t it convenient of films to actually state this sort of thing (presumably for tax purposes) in their credits nowadays? No more wondering what combination of French, German, Dutch, Spanish, Liechtensteinian etc was stirred up together in the financial melting pot.

Anyhoos... the two films with which this most stands comparison are less obvious. On the one hand it’s a non-American teen comedy about adolescents coping with crushes, dating, schoolwork, peer pressure and suchlike, but with a fantasy element in the mix. In that respect, the film it most closely resembles is Virtual Sexuality. And on the other hand, it’s a zombie film where our central character is gradually becoming more zombified over the course of the movie and in that respect, as I hope you can see, it resembles Andrew Parkinson’s I, Zombie: The Chronicles of Pain. Only with more laughs, obviously.

David Leon (Alexander, Cutting It - the only non-Irish cast member) stars as Nathan, a good-looking, likeable lad who is enamoured of Jessica (top-billed gorgeous pop pixie Samantha Mumba, who seemed to disappear after this and The Time Machine but who is currently filming werewolf tale Shifter), a good girl who lives in a large house with her disapproving single father (Bryan Murray: Bread, Brookside). Nathan also has a lone parent, Grace (Deirdre O’Kane, the director’s wife) who seems to be some sort of archaeologist or historian, working in the local church. 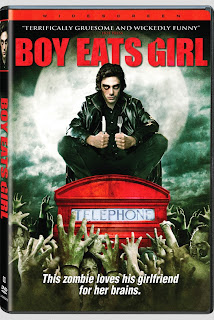 Nathan is the sort of lad who prefers to stand on the sideline of the rugby pitch during PE with his like-minded pals, sensible Henry (Laurence Kinlan: Ned Kelly) and floppy-haired, slightly nerdy Diggs (Tadhg Murphy). His nemesis is school bully Samson (Mark Huberman: Band of Brothers), not least because Samson’s girl, tarty Cheryl (Sara James) wants Nathan, precisely because he’s the only boy in school not lusting after her. Samson has his cronies, minor thug Shane (Paul Reid) and braggadocio slimeball Kenneth (Conor Ryan) while Cheryl hangs out with the only slightly less tarty Charlotte (Sarah Burke) and Glenda (Jane Valentine).

The rather overlong first act of the film introduces us to these teenagers who are all meant to be 17 or 18 but, in the tradition of American teen movies, are played by actors in their mid-twenties. Apart from a passing mention of someone’s 14-year-old sister, there is no indication that there are any younger pupils at the school.

When Diggs and Henry finally force Nathan’s hand in his quest for Jessica, a series of unfortunate events lead to him not only thinking that she has stood him up but that she is actually having it away with the odious Kenneth. Thoroughly miserable, he walks home, knocks back a bottle of whiskey which he had been planning to smuggle into the next night’s end-of-term disco, and contemplates suicide - which his mother accidentally completes for him.

Fortunately for Nathan, Grace had discovered a book of voodoo rituals in the church crypt and brings him back to life the next morning, a part of the plot cleverly whizzed through in a fast montage of images. But the local priest (Lalor Roddy) warns Grace not to use the book because the dead that it resurrects have a hunger for human flesh. 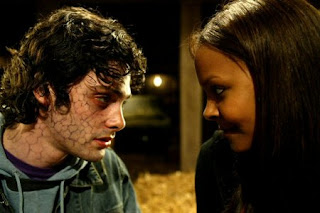 This is actually an unusual and interesting take on the zombie mythos because it combines both aspects of the cinematic zombie: the traditional (magical voodoo resurrection of the dead) and the Romero-esque (flesh-hungry ghouls whose victims rise to join them). I can’t think of any other zombie film which manages to successfully bolt the two different types of zombie together.

Nathan gradually realises that something is wrong and eventually his mother admits to him what has happened. His descent into cannibalistic necrosis is represented by a growing spider-web of veins on his face while the character finds himself possessed of increased strength and speed and an imperviousness to pain (“Can you fly?” enquires Diggs in the film’s funniest dialogue scene). At the dance, Cheryl attempts to get off with Nathan who is subsequently set upon by Samson - who ends up with half his face ripped off.

From there, the zombie infection spreads like wildfire, although only to the teenagers and their adult associates, unfortunately emphasising the film’s small budget. Eventually, only Nathan and a few others are left, surrounded by the undead ghouls. For some reason Nathan’s transformation is very, very gradual while other people are zombified in minutes; we must surmise that this is because he is the original, his resurrection due to magic rather than being bitten by a zombie.

Tracking who is undead and who has bitten whom is difficult and there is no real sense of progression or spread of the condition, just a series of quick shots of people being savaged by someone moving too swiftly to identify. One of these occurs in a bar (with fish tanks in the roof) where Cheryl and Glenda are chatted up by Jessica’s dad, a curiously out-of-place sequence which is presumably designed to show the father as hypocritical, in that he doesn’t want his daughter out partying in a low-cut top but he enjoys other girls doing the same. But we just haven’t got to know the man well enough for this to work, and we never see him again. 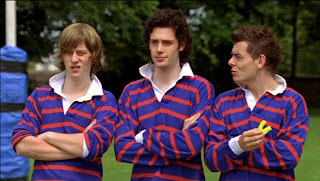 I get the impression that a considerable portion of Jessica’s dad’s scene ended up either on the cutting room floor or in earlier drafts of the script. There are other lacunae in the story too. For example, we see Jess grooming a horse at one point but the animal is never mentioned, has no relevance and is never seen again. Quoted in the press notes, Mumba mentions having to ride a horse so there must be a relevant scene omitted. (The DVD has no deleted scenes, only a nine-minute Making Of and a trailer.)

The standout action sequence has Jessica, safe inside a tractor cab, using a large hedge-cutter mounted on the end of the tractor arm to chop up and mow down zombies. This is a gleefully gory sequence which, in terms of agricultural equipment-induced carnage is second only to the combine harvester scene in Evil Aliens. But again there seems to be an earlier scene missing as this is the first time we have seen this tractor. There is no indication of where it has come from (I suppose Jessica and her dad may live on a farm but we can’t tell that) or how this quiet, studious teenage girl knows how to operate complex and powerful farm equipment with skill and dexterity. It’s funny, it’s gory - but without explanation it’s deus ex farm machinery.

Another thing lost from the film but surviving in the press notes on the movie’s website is Nathan’s vegetarianism. After he comes back from the dead we see him attempting to eat raw vegetables and fruit but spitting it out but we don’t see him try eating (non-human) meat - and some play is made over the fact that the part of Samson’s face that he bit off, he immediately spat out. This is, I think, supposed to have some bearing on why he remains basically human apart from his strength, pain threshold and increasingly prominent veins. 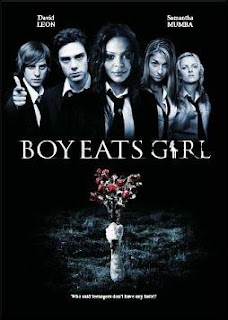 Clocking in at 77 minutes, this is a short film and could have stood some additional characterisation and exposition. Even though it takes too long to get to the zombies, it could at least have replaced some of the teen soap scenes at the start with the missing scenes of horses, vegetarianism and tractors.

Boy Eats Girl is a lightweight, low-budget comedy and knows it. Clever editing removes the need for actually showing certain shots which would have doubled the budget, such as a car-crash. But further exploration of the situation and its potential outcomes would have given the film more weight, bringing it closer to the Romero-style satire that zombie films do so well and further away from the Irish Pie teenage sex larks that distract from the story. 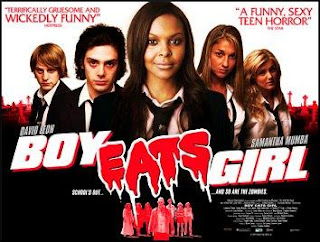 Boy Eats Girl could have been more than it is. It could have really delved into the characters and how their lives are changed by this outbreak of the undead, it could have had something to say about modern Irish teenage society, it could have explained how Samantha Mumba’s character knows how to operate a tractor arm. The film frustratingly lacks ambition, although it’s difficult to know how much of that is due to the obviously missing scenes. Nevertheless, this is a good-natured, fast-paced, sometimes laugh-out-loud funny Anglo-Irish horror comedy and there aren’t too many of them.