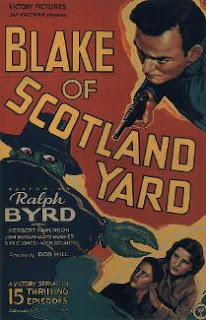 Baffling is right. This could be the least comprehensible 73 minutes of your life. And the longest.

Here’s the background. The first Blake of Scotland Yard was a 1927 silent serial, directed in 12 chapters by Robert F Hill from a script by Hill and William Lord Wright. There is very little information on this version which Wikipedia reckons is lost. However, it is described in Phil Hardy’s Aurum Film Encyclopedia of Science Fiction, proving that in these online days there is still no substitute for a damn great doorstep of a book (even if the photo alongside the review is from the 1937 version).

The uncredited review in Hardy praises the serial, comparing Hill to the likes of Feuillade and Lang and observing that “instead of relying on the usual death ray or new explosive gimmick to initiate the action, this picture uses the more exotic alchemist’s dream of turning metals into gold.” Hayden Stevenson starred as retired Scotland Yard inspector Angus Blake with Gloria Gray (or possibly Gloria Grey) as the young woman who calls on him to protect her father’s invention from the mysterious criminal known only as ‘the Scorpion’ (Monty Montague).

Ten years later, Hill remade Blake of Scotland Yard as a sound serial, changing pretty much everything except the basic premise and the villain’s name. The Scorpion in this version is a hunched figure who hides his face behind a rubber mask, then hides that rubber mask under a floppy-brimmed hat, then holds his cape up in front, in true ‘Hooded Claw’ fashion, just to make sure that nobody knows who he is. 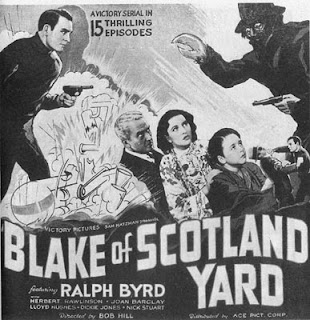 He also has a deformed hand which is like a crab’s claw, hence his name of, ah, the Scorpion. Well, I suppose it’s a bit like a scorpion’s claw too. Not that it is a deformed hand, it’s just another rubber appendage. Good for disguise, not so clever for operating equipment. Fortunately the Scorpion has a whole squad of goons based in Limehouse to do his dirty work for him.

Sir James Blake (Herbert Rawlinson, who started out in about 1911, made literally hundreds of silent shorts, and topped off his career with Ed Wood’s Jail Bait) is no longer called Angus but is still a retired Scotland Yard inspector, helped by serving copper Chief Inspector Henderson (Sam Flint: The Monster Maker, The Crimson Ghost and an uncredited role in Psycho). Instead of the alchemical machine, this version does indeed “rely on the usual death ray”. This has been invented by Jerry Sheehan (top-billed Ralph Byrd, the same year that he began his three-decade career as Dick Tracy) who is walking out with Blake’s niece Hope Mason (Joan Barclay: Black Dragons, The Corpse Vanishes). There is also a gee-whillikers kid, Hope’s brother Bobby (Dickie Jones, who was the voice of Disney’s Pinocchio and is still alive, aged 82, as I write this in 2009).

Sheehan, Hope, Blake and Henderson demonstrate the death ray to a bunch of international top brass at their palatial stately home. The target is an old warship, anchored many miles off-shore. Remarkably, as well as the death-ray (we never see where that emanates from), Sheehan has devised some sort of remote televisual device which allows them to actually see the ship being destroyed. However they still wait for a phone call from the Admiralty to confirm that one of their planes has looked for the ship and failed to locate it.

All the bigwigs are terribly impressed but Sheehan reminds them that the device is designed to stop wars: if every nation has it, none will dare start a conflict. Ah, if only it was that simple...

Unbeknown to the assembled toffs, they are being spied on by members of the Scorpion’s gang, who have been let into the building by nefarious butler Daggett (Theodore Lorch, whose many uncredited roles include Buck Rogers and Flash Gordon serials plus the 1939 Hunchback of Notre Dame). The Scorpion resolves that he must have the machine so sets about stealing it, which he later does, holding Blake, Sheehan etc at gunpoint. 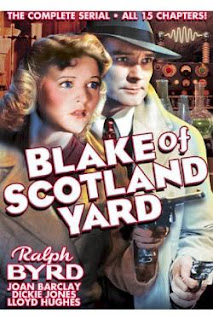 And then, well then it all becomes awfully confusing. I mean, it’s been a bit vague and unexplained and arbitrary up to now, but you expect vagueness and unexplainedness and arbitrariness at the start of a film. It will all become clear later. Except that here, it won’t. And the problem is very simply that more than five hours of serial running time has been condensed into less than an hour and a quarter.

There is no way that this could possibly make sense, even if the sound was clear (it’s not really), the camera-work was good (a few imaginative shots notwithstanding, it’s pretty routine) and even if the print was superb quality (it’s so-so). Maybe you could follow this if you had already seen the full episodic serial version, but if you’ve seen that, why would you want to watch this feature-length re-edit - unless you’re some sort of weird Robert F Hill completist.

A large part of the film takes place in Paris - for no reason that I can see - where our heroes, plus undercover policewoman Mimi (Gail Newbury - apparently never heard from before or since) and medical colleague Dr Marshall (Lloyd Hughes, who was in the 1929 Mysterious Island and the 1930 Moby Dick) investigate a basement cafe. The entertainment in this place consists of something called ‘apache dancing’ which basically involves swarthy frog Julot (Nick Stuart: Killer Ape, The Lost Planet and a 1930 short called Honeymoon Zeppelin!) arrogantly throwing women around in a way that would constitute assault in today’s climate.

Mimi and Sheehan have disguised themselves as a newly married American couple although it’s questionable how much a false persona can be classified as a ‘disguise’ when it mostly involves being as loud and noticeable as possible. At one point Mimi, faking intoxication, demands an apache dance with Julot in order to retrieve a note tucked in his waistband. Since this unsigned note only says ‘meet me upstairs’ (in English) it’s questionable how much use it could be to the investigation.

There is an enormous amount of running around between various rooms and corridors but, since we are never given any idea of where any particular camera angle is in terms of physical space and relation to the other shots, it’s impossible to follow what is going on. Nor does it help that all the man wear basically the same outfit. At one point, the Scorpion (for it is he) disappears completely after apparently knocking over Dr Marshall, a pretty big clue which should ring a bell even for those people who haven’t worked out the villain’s identity by reading the cast list on the DVD sleeve. 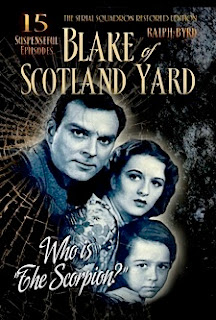 Back in England there is a sequence in Limehouse where our heroes infiltrate the Scorpion’s lair and actually impersonate him. How can an investigation know where the villain lives and what he looks like (or at least, what his mask looks like) without getting some clue as to his identity? There is also a lengthy sequence where someone (Sheehan?) rents a room in a house also used by the Scorpion’s gang and then someone else (Blake?) impersonates the elderly, moustachioed landlord. The Scorpion’s hoods are completely taken in by this despite the fact that Blake is clearly a head taller than the other bloke.

The landlord has a son who is physically massive but mentally retarded, who spend most of the time locked in a room, reaching through the bars on his door, trying to communicate that his dad is tied up under the stairs.

I’m running out of clearly definable bits of action/plot here because the massive editing renders the entire thing impenetrable. Adding to the impenetrability is the very sparse use of dialogue. This really feels like a sound film (well, serial) that has been made from a scenario written for a silent version. As to some extent, it was.

There are long sequences with no dialogue whatsoever, just the occasional short line to convey some information (which, devoid of context, is usually meaningless to the audience). There’s certainly not a word during the many, many fight scenes, all of which are of the terribly genteel sort favoured during the 1930s. 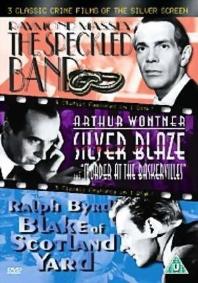 Writers Basil Dickey and William Buchanan collaborated with Hill in another serial-cum-feature the previous year, Shadow of Chinatown starring Bela Lugosi. Buchanan’s career was limited to a few titles in the 1930s but Dickey was incredibly prolific, racking up more than 140 screenplay credits from classic silent serial The Perils of Pauline in 1914 through to Lawless Code, a 1949 western. The IMDB gives him a whole bunch of extra credits up to 1966 (eight years after he died!) but they’re just TV edits of old movies and serials. Among Dickey’s notable scripts are The Purple Monster Strikes, Flash Gordon Conquers the Universe, assorted Zorro, Tarzan and Green Hornet titles and the 1944 Captain America serial. Ray Mercer, later on The Adventures of Superman, provided the special effects.

The version which I watched was released by the Moving Image company as part of a five-disc Bumper Box of Adventure Films for Boys, which also includes The Mark of Zorro, My Pal Trigger, The Son of Monte Cristo and The Jungle Book, Sabu version). Blake of Scotland Yard was also released on a Classic Entertainment triple-bill disc alongside low-rent Sherlock Holmes features The Speckled Band (1931, with Raymond Massey) and Silver Blaze (1937, with Arthur Wontner).