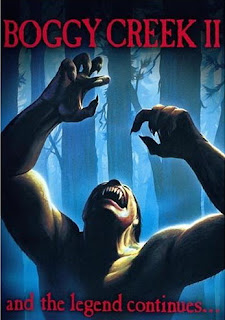 But oh, this must be one of the dullest monster films ever made. It’s not that it’s tedious or boring, it’s worse than that - it’s gentle. The first ten minutes is basically a nature documentary, a travelogue about the watery, swampy area on the Texas-Arkansas border where the story takes place.

Anthropologist Dr Brian Lockhart (writer/director/producer Charles B Pierce) heads down that way to search for the legendary Beast of Boggy Creek, a sort of redneck bigfoot. He is accompanied by two of his students, Tim Thornton (Pierce’s son Chuck) and Tanya Yazzie (Serene Hedin: Sacred Ground) plus Tanya’s friend Leslie Ann Walker (Cindy Butler: The Town That Dreaded Sundown) who wears make-up in the woods and would rather stay in a hotel. Tim spends almost the entire film showing off his skinny white chest which is an alarmingly gay subtext given that he’s being directed by his father.

As they search for the animal, we see various flashbacks to occasions when it was sighted. Despite Dr Lockhart’s comments that it hardly ever attacks people, that’s pretty much all we ever see it do. And once camp is established, including a frankly bizarre radar set-up, the Beast finds them almost immediately and then keeps popping up. So it’s not exactly difficult to track down, but once they spot it they get scared and do their best to scare it off. So quite what sort of research are they doing exactly? There is also a scene where the quartet are menaced by a rabid dog which has no bearing on anything but pads out the running time. 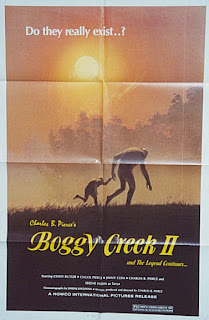 Eventually they get a lead and head off up-river to find an overweight redneck recluse named Old Man Crenshaw (Jimmy Clem, a regular in Pierce movies) who turns out to have a baby Beast lying injured in his back room. Quicker than you can say 'Gorgo', Momma Beast comes around looking for her kid. Dr Lockhart reunites the family and realises that to preserve this rare and special creature he must not report the positive findings of his expedition.

Which is all very well and laudable, in the same way that it was with Ted Danson and the plesiosaur much later in Loch Ness. But Boggy Creek II not only lacks the magic spark of that film, it misrepresents itself as a horror film, which it certainly isn’t. The acting, on the whole, is not up to much and the script is bland - with Leslie’s whinging the only concession to characterisation - but the photography is nice and that seems to be the main point. The hairy Beast suits are pretty good, though there are some inadvisable close-ups of the masks in the final scene.

Review originally posted before November 2004
Posted by MJ Simpson at 22:00