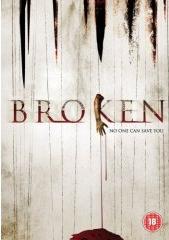 What a squalid and unpleasant film. Oh, don’t get me wrong. Broken is excellent in both technical and artistic terms, but the actual subject matter seems gratuitous and exploitational. I looked for redeeming aspects to the story but they were very limited.

I suppose Broken falls into the ‘gore-nography’ subgenre which is getting so much press nowadays. Certainly one could describe it as ‘torture horror’ in that the fear comes not from suspense, not from plot, not from characterisation and only partially from trepidation about what might happen. The fear in this film is generated mostly by what does happen, explicitly, on screen when one individual inflicts torture on another.

Nadja Brand (business partner and wife of co-director Adam Mason) stars as the aptly named Hope, a single mum whose life (what little we see of it) seems quite cosy and nice. One morning she wakes up in a wooden box in the middle of a forest. After screaming and banging on the lid for a day she is released by a bloke who is only credited as ‘The Man’ (Eric Colvin) who drags her through the woods to another torture. This involves balancing on a wobbly bit of wood, with a rope tied around her neck which will throttle her if she falls. Her only hope is to unpick a crudely stitched wound in her belly, reach in among her own guts and remove a razor blade with which she can slice the rope. The Man doesn’t explain this to her, he merely hands her a sharpened stick, but she is somehow able to work out what she must do. It ain’t pretty. 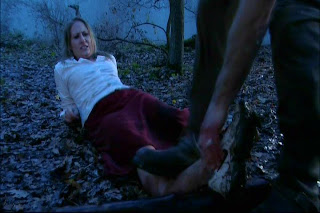 Thing is, in a prologue we saw exactly the same thing happen to another woman, who used the Man’s rifle to kill herself afterwards. Now, I’m not an aficionado of torture horror - never seen Captivity, either Hostel or any Saw - so the only thing I can compare this with is Wolf Creek. And some obvious differences present themselves, most notably that in the Aussie film we spent a long time getting to know our protagonists before they were captured and we also got to know our antagonist beforehand too, mistaken though our initial views of him may have been. But the prologue to Broken seems to be pure exploitation, lurching straight into the frankly misogynistic torture of a character we don’t know and never will know. As we’re going to see the whole sequence of events again ten minutes later, that opening seems to be there merely to get gorehounds excited by the level of violence.

Having survived the torture, Hope is taken by the Man to his camp where she is chained up and he restitches her stomach wound. Her job is to cook and clean for him, including tending a small, crude vegetable garden. The Man is impassive, deflecting all questions about what has happened to her six-year-old daughter Jennifer. He merely expects Hope to be his slave. Interestingly there seems to be no sexual angle to this which is why Hope’s successful attempt, at the halfway mark, to seduce her captor comes across as overly abrupt on both their parts. Not that it does her much good as she doesn’t take proper advantage of the situation.

This sequence just seemed unrealistic. I couldn’t believe that the Man would immediately accept such an instantaneous display of Stockholm syndrome nor that he would let his guard down enough to sleep peacefully beside Hope that night, allowing her to grab his keys and make a break for it in the morning. A slower development of the relationship, gradually seeming to turn through 180 degrees, would have been more believable in terms of both plot and characterisation.

I’m spoiler-protecting the next couple of paragraphs: 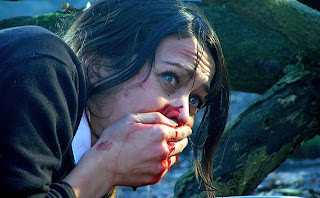 Later a teenage schoolgirl turns up, having also survived the razor-in-gut torture but she won’t stop screaming until the Man inflicts a particularly nasty and brutal punishment on her. I was hoping for some development of the three-way relationship, especially with the Man having repeatedly told Hope that he is her family now, but the two women make no attempt to bond. Nevertheless, outnumbering himself is the flaw in the Man’s scheme and when the schoolgirl makes a temporarily successful break for freedom, Hope is able to take advantage too but then comes back, presumably having realised that if she runs away she will never find out what happened to her daughter.

At this point the plot seems to fall apart a little. The Man chases the schoolgirl and blasts her in the back with his rifle then spends some considerable time throttling her as she struggles. When he returns to the camp he is wounded, weary and actually breaks down, sobbing, at how everything has gone wrong. I don’t get that. He’s a fit, trained, confident adult male who has just fought a half-starved, terrified, unarmed teenage girl with a gunshot wound in her chest. How exactly has he been injured? Whatever, Hope is able to smash his head in, apparently no longer caring about finding out where Jennifer is. In the final scene, she does find Jennifer still alive but falls victim to a particularly nasty trap which ends the film on about as bleak a note as is possible.

What disturbs me is that we never find out any context for this. I’m not looking for pat explanations but we have no hint who the Man is, why he does this or, crucially, what he ultimately wants. He is a threat devoid of context and that makes his inhuman actions both amoral and, frankly, uninteresting. While we naturally side with Hope, wanting her to escape and rescue her daughter, we don’t really know anything about her life either. And this narrative vacuum really makes the horrific story, especially the lingering camera shots of brutal wounds, seem gratuitous and nasty.

Yet this can’t just be a pile of violent nastiness for sickos to get their rock off over - it’s too well made for that. I don’t know Adam Mason or his co-director Simon Boyes but some of the crew are guys I know or have met. The cinematography by Erik Wilson (Pumpkinhead III and IV) is flawless; I mean, really superb stuff. The whole film was shot outside - apart from a few early scenes showing Hope’s normal life - and Wilson does wonders in combining the desperate isolation of the camp with the beauty of English woodland (the location was in Cambridgeshire) including shots of wildlife such as spiders and robins. Production designer Neil Jenkins (Razor Blade Smile, Evil Aliens, The Last Horror Movie) works wonders with virtually nothing except a couple of tarpaulins, a campfire and a few buckets. The camp looks completely believable and that’s a testament to Neil’s skill. As for the make-up effects by Tristan Versluis (Evil Aliens, Hellbreeder, Cradle of Fear), they are as realistic as they are revolting, absolutely top-notch stuff which puts many recent Hollywood blockbusters to shame and never betrays the movie’s low budget. 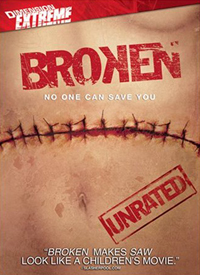 These are good guys, doing exemplary work. Boyes and Mason did their own editing (likewise excellent) and Brand (who was also a producer) handled the non-FX make-up. Technically and artistically, this film is a triumph; plaudits to all concerned. As for the acting, it’s terrific, there’s no doubt. Nadja Brand (whose South African accent surfaces occasionally) projects real fear followed by real determination and the fact that she’s not a Hollywood bimbo is much in her favour. Eric Colvin is likewise spot-on as the utterly dispassionate Man and it’s not the actor’s fault that the long trench-coat, wide-brimmed hat and crossbow make him look like Van Helsing. Neither character has much dialogue but Abbey Stirling as the schoolgirl has none at all, apart from endless screams. No, you can’t fault the cast.

But all this excellent work does not disguise the fact that Broken is basically ninety minutes of a sicko mistreating captive women, without intro, outro, context or explanation. It just is, and what it is is distinctly unpleasant. I kept thinking of that famous review of The Curse of Frankenstein which said that a new BBFC certificate should be created: SO - for Sadists Only. Despite the commendable look and construction of the film, I really can’t imagine anyone actually enjoying it unless they get a kick out of watching psychopathic violence for its own sake.

I know I’m sounding like the Daily Mail here but those of you familiar with my taste in movies will know I’m no prude, happy to watch limbs ripped apart, heads split asunder and all manner of prude-baiting violence. But I expect that violence to have a context, to convey to me ideas about the human condition, to make me think about how bad people rationalise their actions and what good people can do to stop them. Broken has none of this. Perhaps it’s just examining what inhumanity people are capable of and the resilience that resides in others, especially a mother concerned about her daughter. But we see both of these on the news every day; Mason, Boyes and co. don’t need to spend five weeks shivering in a Cambridgeshire woodland to tell us this.

This is Adam Mason’s third feature, although the first one I’ve seen, and by all counts it’s a step up on every level from The 13th Sign and Dust. Next up is The Devil’s Chair, also co-written with Simon Boyes (who was assistant art director on Evil Aliens). Mason has directed that one solo while Boyes has shot second unit, It’s due to play Frightfest 2007 a few weeks after I type this. Nadja Brand has starred in all five Brand Mason films, as well as a few music videos. Eric Colvin was also in Dust and The 13th Sign, while this appears to be Abbey Stirling’s first screen role. New Zealand born, she was a theatre, film and restaurant critic for various London magazines and also worked on the BBC online films database (and she was 28 when she played this ‘schoolgirl’!). 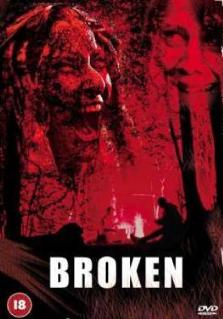 Erik Wilson shot The 13th Sign, Dust and Mason's short Prey as well as second unit on the Hills Have Eyes remake and its sequel and Michael Sellers’ Vlad (on which Nadja Brand was second unit production manager). Neil Jenkins reteamed with Mason for The Devil’s Chair. Tris Versluis previously worked on Dust and more recently has been jobbing on stuff like Doctor Who, Hot Fuzz and Sweeney Todd. Many of the usual suspects from the British horror revival - Jake West, Alex Chandon, Tim Dennison et al - get a 'thank you' name-check in the credits.

Anyway, that’s Broken, one of a staggering 15 films sharing that title since 2000 (including Alex Ferrari's short). The greatest irony of Adam Mason’s Broken is that the film looks beautiful but the story is just, well, grubby.