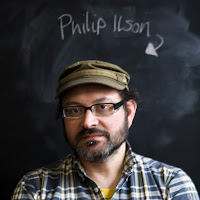 Unconnected with the identically titled, Charly Cantor-directed feature, I expect this is meant to be avant-garde or something. It’s ten minutes of (possibly deliberately) scratched 8mm film with a voice-over in Italian and lots of irritating jump-cuts and it’s not terribly interesting at all I’m afraid.

A blonde girl (Vistven) wearing only white panties lies on a mattress on the floor of a room. She coughs up some blood and then quite a lot of blood appears on her, though it’s not clear whether she is meant to have coughed up the lot or whether there is some other source.

She has a quick bath, dresses and goes out. On the tube she spots another girl (Andrews), follows her and attacks her - somehow. She carries her victim home (somehow) and slices her wrists and drinks her blood. Then she slices her own wrists. It finishes with the blonde climbing up onto the roof and dancing in the sunlight.

Over all this a voice-over (Marchegiani) spouts a load of pretentious sounding nonsense in subtitled Italian, mentioning Frankenstein at one point.

The credits say this is based on a short story by Tim Harding called ‘The Hand of Glory’ but one of the two on-screen essays (which largely duplicate each other) says it’s a remake of an earlier 16mm film by Harding. Someone called Jane Rogers gets a ‘script’ credit; I assumed that meant she was script supervisor but the credits on the sleeve suggest she wrote the script, even though the on-screen credits clearly identify Ilson as writer, director and producer.

Apparently Ilson and Harding ran a sort of club in London during the 1990s called Halloween, full of VJs and multimedia stuff - it sounds dreadful. This is Ilson’s first film and the telling comment, in one of the essays, is that he wanted to make a horror film because he thought horror was an under-served genre among shorts. Which is of course nonsense - if anything it’s one of the most popular genres for short film-makers at all levels - suggesting that he really doesn’t know the field. The sleeve compares this to ‘Jean Rollin at his best’ but I don’t know about that; at his most pretentious maybe.

Blood is included as a bonus on the Salvation Films 2003 DVD of Ivan Zuccon’s marvellous The Shunned House, along with the aforementioned essays (one of which is called ‘Director’s Biography’), a credit list and four or five uninteresting stills. Kudos to Salvation for putting a short on with the main feature, but I expect this is more to their taste than mine.

Why is the narration in Italian? Who knows? Coupled with the pairing with Ivan’s film this did make me wonder whether this was an Italian short, but that notion was dropped in the tube scene when an announcer is clearly heard to say “This train terminates at ... Ruislip.” - a brief moment of unintentional hilarity.

You can’t fault it in terms of the amount of blood on show, but this film smacks of somebody trying to run before they can walk.