Like all journalists, I am not as impartial as I pretend to be. I have friends in the business and I will naturally look on their work more favourably than similar stuff from complete strangers (and certainly more favourably than a few people whom I have met and found to be complete tosspots). What would be the point of people befriending journalists if there wasn’t a bit of quid pro quo? I’m a film journalist for goodness’ sake - I’m one step up from a weasel and only three or four steps up from an agent. Anyway, if I didn’t say nice things about my professional contacts I might have to occasionally buy my own drinks and that would violate every ethical standard of journalism far more than a little favouritism.

But let me qualify my position. I speak as I find and if something is not good, I will say that, albeit I will always try to find something positive to say if I can and I will give praise where praise is due. ‘Favouritism’ just means that I’m more diplomatic when it comes to my mates’ work if it’s bad and slightly more enthusiastic if it’s good. I might bump a C+ up to a B- but I would never lavish praise on something unduly. That would do me no favours, would do you the reader no favours and nor would it do my mates any favours because film-makers and actors require constructive criticism.

All of which preamble is basically to give some context to the following.

Bad Brains, the fourth feature from my Italian pal Ivan Zuccon, is absolutely bloody brilliant. I’m going to stick my neck out here and say that this is possibly the best horror movie to come out of Italy since Dellamorte Dellamore (which to my mind was the last really, really great spaghetti horror). It is just massively impressive. It is also disturbing, original, thought-provoking and very, very Italian.

Zuccon regular Emanuele Cerman stars alongside Valeria Sannino as Davide and Alice, two people with a lot of blood on their hands. They kidnap, torture and kill both men and women, treating their victims with a callous disregard or even using them as playthings. They also video themselves doing this. But this pair are not simply serial killers and they are certainly not dispassionate like the VHS-wielding characters in Henry: Portrait of a Serial Killer or The Last Horror Movie. Alice and Davide are passionate, emotional, sometimes angry, sometime blasé. They do not kill for fun, they do not kill for no reason. In fact, they kill for one very simple and straightforward reason.

They are looking for something. There is something that they expect - or hope - to find within the body of each successive victim. But they have not found it yet, and that is why they must go on kidnapping and killing.

We know very little about this pair at the start of the film and not much more at the end. Apart from their victims, the only things which seem to interest them are occasional meals and occasional bouts of sex. They live in a semi-derelict farmhouse in the middle of nowhere. We do occasionally see childhood flashbacks in which we learn, fairly early on, that Alice killed her own mother (Roberta Marrelli). But the reliability of these flashbacks is not absolute - there are levels of reality here...

Into their isolated and murderous lives comes a curious, handsome young man, Mirco (Matteo Tosi), who may be bound and beaten but is not just another nameless victim. He has been stalking Alice and Davide, indeed his car is parked on the mist-shrouded ground outside. Mirco believes he knows what Alice and Davide are looking for in their victims’ bodies. He also believes that the blood welling up from stigmata on his hands is not his, and it seems that any injury suffered by Mirco is reflected by a sympathetic, unexplained injury to Davide, although these injuries come and go depending on who is looking at them. Nevertheless, Davide is understandably reluctant to kill this particular young man. 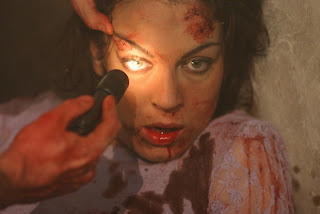 Nothing is straightforward in this skilfully constructed tale of psychos and psychoses. The viewer is kept on edge as we jump between several versions of reality: what is happening, what people think is happening, what people remember happening, what the unblinking video camera shows is happening (or at least, what people think it shows). But from this assault on one’s senses and one’s comprehension gradually appears a narrative and a (partial) understanding of these two deeply, deeply disturbed characters. We never fully understand them and we never fully understand what is going on, but that, to me, is a characteristic of the very best horror films, especially Italian ones.

That’s not to say that this is a ‘psychological thriller’. Zuccon piles on the blood and gore, assisted by the special make-up effects of Francesco Malaspina. Cerman in particular spends a considerable amount of time almost painted red. There are some truly horrific moments and horrible images, as well as unpleasant ideas and suggestions. This is a full-blooded horror film.

Four features in, one can identify recurring elements in the director’s work, especially in this first non-Lovecraftian movie (although there is a Lovecraft paperback in a couple of scenes). People living in derelict buildings, swirling mist, chiaroscuro lighting, dollying camera shots: all these are iconic of Ivan Zuccon’s oeuvre. But above all there is the refusal to work on a single level of reality; a carefully constructed montage of contradictory or complementary events which offers no easy answers. Give Ivan time to shoot a couple more films and some student somewhere is going to be able to write an absolutely fascinating thesis on his work.

There is a lot to this film that I don’t want to discuss because to do so would lessen its first-time impact on the viewer. In particular, we learn something about Davide and Alice about halfway through which changes our view of them considerably and which I suspect other reviewers may not be able to resist telling. I shall refrain.

Some people will have a problem with the shot-on-video look of the film, though this only really stands out in certain shots and for the most part the movie looks great. Ivan did his own cinematography and also edited the film himself. I wasn’t entirely certain about the repeated use of a juddery soundtrack in the fade-outs between scenes. It is presumably a reference to the all-seeing video camera set up in the couple’s ‘home’ but it sounds more like a loose speaker cable on the viewer’s TV.

In terms of narrative, it is not too difficult to work out who Mirco really is, but that doesn’t really matter because the mystery is what he is and why he is. The ending, a quite lengthy epilogue set several years later, didn’t entirely satisfy me although I’m not sure where else the story could have gone. But these are quibbles, mere idle thoughts of a jealous critic, and do not take away from the magnificent achievement that is writing, directing and producing Bad Brains, especially in a country like Italy where the infrastructure for films of this sort just isn’t there.

The idea itself began life as ‘Just Before Delirium’, a short story written several years ago by Unknown Beyond/Shunned House scriptwriter Enrico Saletti. This was filmed by Zuccon as a short, Degenerazione, in 1998. The screenplay for this feature version was written by Ivo Gazzarrini. After shooting in English on The Shunned House, Zuccon has reverted to Italian with English subtitles (I think wisely). Emanuele Cerquiglini is credited as producer which I assume is Cerman’s real name as the film is ‘a Cerman/Zuccon production’.

Most of the cast and crew have worked on one or more of Zuccon’s previous films. Cerman and Sannino are simply fantastic in two extremely challenging, intense, complex roles and I would not be surprised to see either of them snapped up for international work on the basis of this. Kristina Cepraga, Valter D’Errico and Liliana Letterese brilliantly portray the suffering and abject fear of their victims. Massimo Storari’s visual effects are astounding in both their execution and their subtlety.

I really was bowled over by this and cannot recommend it highly enough. Yes, I declare my interest, as at the top of this review. I have known Ivan Zuccon for five and half years and Emanuele Cerman (through e-mail) for part of that time but that has nothing to do with my fulsome praise for Bad Brains. If this had turned up in my letterbox out of the blue I would still be raving over it because I am very, very impressed on all levels and in all respects. This is a storming horror film.

The screener that Ivan and Emanuele sent me included a bunch of extras, none of them subtitled although that didn’t matter at all. A five-minute Making Of offers behind-the-scenes footage contrasted with the relevant clips from the film. There is a five-minute stills gallery set to music and five minutes on the effects and make-up which is partly another stills gallery and partly a look at the digital effects which created a very realistic (and narratively essential) hawk moth. A handful of deleted scenes include four versions of a dream sequence with Davide on a spiral staircase that stretches into infinity and there are also three trailers. What is not included is the original 1998 short version.

Ivan Zuccon’s progress through his four features to date shows a continuing development and a growing confidence and maturity. This guy is capable of great things and, in my view, he is starting to do them already. Since I began championing Ivan’s work it has been immensely gratifying to hear and read other people sharing my enthusiasm for his talent so I know that I am not alone in my views.

Bad Brains is Ivan’s best film yet and could be the one that breaks him out of his enthusiastic but limited circle of appreciation, establishing ‘Ivan Zuccon’ as a recognisable and well-regarded name among horror fans across the globe.