Redemption is touting this French psycho-thriller with the quote “Big Brother meets Saw ... only nastier” and a four-star rating - although cheekily neither the quote nor the rating is ascribed. I’m sure they haven’t made it up.

But it’s misleading anyway. I know the Saw films are a very successful franchise but this film predates even the first one (and the ‘torture-porn’ genre which it spawned). This is not torture-porn or ‘gorno’ as some people have dubbed it and it's certainly not 'nasty' in any way. There’s no actual torture and certainly no gore. There’s a bit of straightforward, brutal violence towards the end and some deaths, but anyone buying this expecting a Saw-style feast of torture and gore effects will be sadly disappointed while people who might enjoy it are likely to pass by (I certainly would have done if I hadn’t been sent the screener).

The film this most closely resembles, and almost certainly its biggest influence, is not Saw but Cube. And Cube was bloody brilliant (I haven’t seen the sequel or prequel so can’t comment). Aquarium isn’t as good as Cube but it’s still a fascinating little feature.

In these days of budget-conscious independent film-making, a lot of people are looking for stories that involve putting a limited number of people into a single location - and Aquarium falls into that subgenre. Six people wake up on the floor of a room with no doors or windows. There’s a table with some unappetising food on it, a TV high up on one wall and a camera on another. In fact the first five minute is shot entirely through the unblinking eye of this camera, albeit with some jump cuts for the passage of time, as the first of the sextet, Vincent (Julien Masdoua), wakes up, tries unsuccessfully to rouse the others and explores the limits of their mysterious prison.

When all six are awake they try to work out what is going on - with Vincent naturally the subject of suspicion as he repeatedly tells them, “I’ve already tried that.” After a while, a dispassionate voice announces their names and then explains what will happen. Basically, there will be a series of challenges and if anyone fails, or doesn’t participate or causes any other sort of trouble - they will be “executed and removed from the residence”. To show that whoever-this-is is serious, the first protest is greeted with an influx of knock-out gas and, when the six prisoners reawake, the trouble-maker is missing something.

Within this microscopic environment, first-time writer-director Frederic Grousset does a terrific job with not only the camera-work (the single, featureless room never seems to stifle the mise-en-scene) but also the characters, all of whom are believable without being either detailed or stereotypes. The arguments, the collaboration, the despair, the bewilderment - all are well-articulated (despite a few typos in the English subs) and explored. Where the film falls down is the ending, or rather endings. 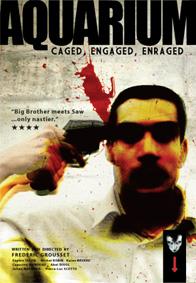 I remember, years ago, reading a letter in some magazine from a muppet who thought that Cube was rubbish because you never find out what the cube is or why it was built. (Here’s the point that you wanted ... oh, you missed it!) Grousset opts to explain (sort of) what was going on and why in an epilogue set outside the building. But then he tacks on another epilogue, a montage of town scenes with a repeat of the dispassionate voice’s instructions which is presumably meant to suggest that the main part of the film is some sort of metaphor for modern life. Or something.

Either of these on their own might have worked but together they pretty much cancel out each other’s effectiveness. As the film only runs 65 minutes (the sleeve claims it’s 70), the upshot of all this is that although the characters and the situation are explored, they’re not thoroughly explored. There was potential for further development of the situation but the resolution in the first epilogue rather deflates the power of the main story.

Nevertheless, Aquarium is an effective and thought-provoking little film which is far more worthy of your attention than Saw or any of its sequels or rip-offs.

Redemption’s region-free release includes a trailer (which pretty much tells the whole story of the film so should only be watched afterwards), a selection of stills and behind-the-scenes photos and a four-minute Making Of. This is a narration- and dialogue-free montage of pre-production and production clips which is nice enough but it’s a bit cheeky to call it a ‘documentary’. Also on the disc are two short films directed by Grousset, Emergency Stop and Shit, both running under ten minutes. There’s also the usual plugs for other, unrelated Redemption gubbins.

The IMDB lists Michel Robin, who plays Georges, as having been in more than a hundred films since the mid-1960s and born in 1930 - but the actor plainly isn’t in his seventies so there must be more than one Michel Robin. The other cast and crew have virtually no other documented credits.

Email ThisBlogThis!Share to TwitterShare to FacebookShare to Pinterest
Labels: 2002, France