Battle Heater: Kotatsu (to give it its full title) is completely bonkers and will appeal to all those who enjoyed movies like Uzumaki, Junk or especially the crazy lock’n’loll of Wild Zero. This is its first western release and first subtitled release. I recommend you get a copy now so you can talk about it to people who have never heard of it.

That said, you should be prepared to explain (a) what a kotatsu is, and (b) why it is one of the most bizarre monsters ever seen in any horror movie.

What we have here basically is a film about a piece of domestic equipment which becomes alive and goes on the rampage, but what makes it potentially slightly inaccessible for western audiences is that a kotatsu is a uniquely Japanese device. It’s basically a small table with an electric heater element underneath. One can put one’s feet and legs under the kotatsu, cover it with a duvet or similar to keep the heat in, and then one is lovely and snug and warm.

Akira Enomoto (Another Heaven, Last Frankenstein, Godzilla Vs Space Godzilla) plays an electrician named Hama and Pappara Kawai (guitarist with rock band Bakufu Slump, who provide much of the music) is his slightly dozy assistant Michio Furuchi. Hama has been collecting second-hand electrical goods to repair and resell, among them a kotatsu, which Furuchi decides he will keep for himself. He takes it back to his apartment in a very strange house full of very strange people. 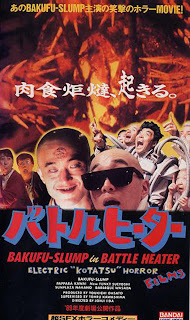 Downstairs is an elderly couple, Mr and Mrs Nakagawa (Masao Imafuku: the 1974 Godzilla vs Mechagodzilla; and Hisako Hara: After Life), who have built a clockwork device that will allow them to commit suicide together. Across the landing, cheating wife Hideko Shinden (Shigeru Muroi: Pretty Body: Frankenstein no Koi, Another Heaven Eclipse) and her brainless lover Osamu (Takayasu Komiya) are trying to dispose of the murdered body of her husband Mannen (Hisanori Ogura: Ashita). They’ve managed to chop him in half, but are having difficulty disposing of the bits.

And next door to Furuchi is Sabii (Goro Kishitani, in the TV version of Rasen), singer with dreadful four-piece punk band Bloody Savie. The band torture and torment Furuchi and force him to pass on an invitation to his girlfriend Kurumi (Kaoru Okunuki: Ring 0: Birthday, GMK: All Monsters Attack) which she assumes is from Furuchi himself but is actually from the loathsome Sabii who has designs on her.

Furuchi prises a metal ring from off his new kotatsu and gives it to Kurumi as a gift, but the ring was acting as a sort of charm which kept the heater’s anger in check. When no-one is around, it starts to become animated, eventually becoming a ten-foot tall, glowing monster, shuffling hilariously around the house and devouring unwary souls in its many-toothed maw. Unfortunately this happens just as a couple of hundred schoolgirls have crammed into Sabii’s apartment, expecting to hear a classical piano recital by their music teacher but treated instead to the raucous noise of Bloody Savie. Fortunately Hama has experience of this sort of thing and turns up to save the day in the most extraordinary home-built power armour.

Battle Heater is extremely funny and deliriously low-budget. The basic premise is utterly bizarre of course, but it is also played out against this cast of eccentrics in their various apartments. Occasionally it seems like Rising Damp on acid. 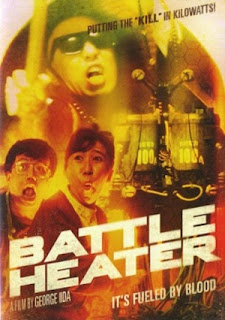 Kenichi Ishii (Godzilla 2000) plays an undertaker who deals with the Nakagawas after their demise, while the other three members of Bakufu Slump have small roles: vocalist Sunplaza Nakano is a monk, drummer New Funky Suekichi is Tobii, drummer with Bloody Savie, and bassist B-B-Q Wasada has an uncredited role (possibly the Bloody Savie bassist?). Bakufu Slump were a massively popular band in Japan, releasing 16 albums between 1982 and 1999.

Director Joji ‘George’ Iida is director of course of Another Heaven and Rasen/The Spiral (both also available from Artsmagic), and also wrote the TV version of Ring. The rather curious writing credit on this subtitled version is ‘written by Mikao Mutsuzuki and AZ Shimaka, script by Goro Nakajima and George Iida’ (Nakajima also wrote St John’s Wort); the Japanese Horror Movie Database suggests that Mutsuzuki and Shimaka may have written an original manga on which the film is based. The cheap but fun special effects are by Nobuaki Koga (Guts of a Beauty, Mermaid in a Manhole, Android of Notre Dame and Gamera 3: The Revenge of Iris).

MJS rating: A-
Review originally posted before November 2004
Posted by MJ Simpson at 22:08