This interview with Michael Bartlett and Kevin Gates, co-directors of The Zombie Diaries, was conducted (by e-mail) for Fangoria in August 2008. But of course only a fraction of the actual interview ever appears in print.

How did the two of you meet and how did you divide up the work on The Zombie Diaries?
MB: “Kevin and I lived in the same town - Letchworth Garden City. I went along to help Kevin on a film set one day for a production he was working on, and then Kevin returned the favour by helping me on one of my shoots. We became good friends and realised we had similar taste in films; we both grew up watching horror.”

KG: “We divided everything 50/50 in terms of writing, directing, producing and editing. If one of us did more work in a certain area, we made sure that it was evened out in another way. The crew was unlike any conventional film, as apart from the make-up effects team and a few production assistants, everything else was done by the two of us.“

At what point did you discover that George Romero was making Diary of the Dead and what do you think are the main differences between the two films?
MB: “We found out just prior to our premiere in August/September 2006 when some guy yelled at me across the office I worked in and shouted something like ‘Dude - someone's copied your film!’ The only thing that worried us at the time was that being a Romero film, Diary would get a huge release first and then people would assume we had copied him. As it turns out, Romero's film was developed without any knowledge of our film, and I think the two complement each other really well. You basically have two vantage points of the same outbreak - one in the US and one in the UK. Romero's film was great for him, great for us, and having these two films means its great for the fans too.”

KG: “The two films start similarly with a zombie outbreak, but after that they go in very different directions. Diary of the Dead makes commentary on the whole YouTube and MySpace phenomenon, whereas Zombie Diaries is pure post-apocalyptic survivalist horror and more about how humans behave in a new world order. Zombie Diaries also covers different groups of survivors whose paths cross occasionally. Diary follows a single narrative thread.” 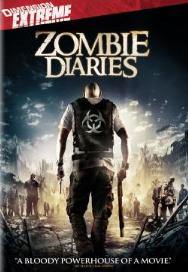 There has been a flurry of fake-camcorder films released recently (Cloverfield, Vampire Diary, [rec] etc): why do you think this subgenre is suddenly so popular?
KG: “Blair Witch kick-started the whole approach, but the medium wasn't fully exploited until more recently. I think the explosion of blogs and YouTube, where you don't have to rely on the usual news channels to tell you what's going on, is an influence on all these films. People have become used to watching home video and amateur footage on the news. Therefore when they see it in a feature film, it feels more real and draws them into a heightened sense of reality.

“For a producer, it’s also an inexpensive way of shooting a movie. You can get away with a lot more and use all the normal trappings of low budget film-making to your advantage. There's a scene in The Zombie Diaries in the 'Outbreak' segment where the characters flee from a farm house. When we shot the scene it was lit by a single torch and at the time were concerned that we weren't seeing enough of the zombies. However, it actually made the scene work much better as the audience has to use their imagination. By catching only glimpses of the zombies, it makes for an increased sense of terror as you know they're there but you can't quite see them. All these kind of things were not only incredibly simple to shoot, but also very effective.”

What was behind your decision to not actually use the z-word in the film's dialogue?
MB: “In the classical world of The Zombie Film, there is no such concept as a zombie.”

How did you assemble your cast and crew?
MB: “We used online resources such as Shooting People and Talent Circle to advertise for the various roles and positions. We also chose to approach a number of actors directly that we had worked before in our previous films. In terms of crew, Kevin knew Scott Orr and Mike Peel (special effects). I had worked with Rob Whitaker (sound mix) before, and he had always done a great job for me so I offered him the sound job immediately.” 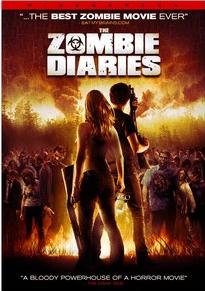 What are the artistic and technical problems (or advantages!) of constructing a movie out of fake 'found footage'?
MB: “The entire production is chronicled on my website www.makingthefilm.com. I have kept a film-maker's diary for seven years now, charting my progress as I try and move from IT into film-making full time. What I will say is that there are no real different challenges to making a 'found footage' movie from a regular movie, except the realism element must be spot on (natural). Cloverfield for me was an utter disaster (Kevin disagrees with me by the way - he loved it!) because it was full of what I call ‘Dude acting’ - it was like there was no director on set helping to make the performances believable, just a bunch of actors and some guy shouting 'action' and 'cut' and not paying any attention to the realism. The whole thing felt too artificial for me - maybe even moreso than a theatre play - even the sound design was too polished.“

How has The Zombie Diaries been received by audiences and critics?
KG: “The film has been very well received by critics. When shown at Frightfest in the UK and Sitges in Spain I watched the film with the festival audience. The Spanish crowd in particular were obviously big zombie fans and very vocal in their appreciation. In Sitges I remember trying to sneak out of the cinema after the film finished, but was caught by a few audience members, who in somewhat broken English told me how much they enjoyed the film. That was great to know and makes trips to these festivals a fantastic experience.

“A few reviews have stated that The Zombie Diaries is more of a thinking person's zombie film. From a writing point of view we were trying to do something a bit different, so that is very pleasing. We didn't just want to make a gore fest, we were more interested in saying something about how people behave in times of chaos. That is why you see the darker side of humanity and an incredibly bleak tone throughout.

“I will say though that the camcorder approach for all these movies (Cloverfield, [rec], Diary of the Dead etc) has divided audiences. Those who enjoyed Blair Witch tend to really like our movie. What I'll say is if you like Blair Witch mixed with Night of the Living Dead, you'll enjoy The Zombie Diaries. Just don't go into the film expecting Bruce Willis!“ 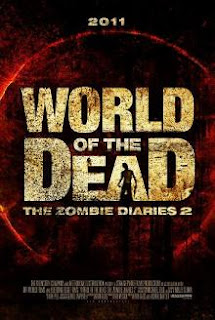 What next for you guys?
KG: “Mike and I will be teaming up again for the next film. Our partnership has been great on Zombie Diaries and we're keen to work together and move forward with the next project. We'll be co-directing again, but this time it will be a little different in that I will be writing, whilst Mike takes on producing duties.

“We've got a number of projects lined up and I've spent a lot of 2008 writing several treatments for future projects with two full screenplays complete. I can reveal we are planning a follow-up to The Zombie Diaries. But there is also another horror film that Mike and I are very passionate about and plan to shoot in 2009. It's a high concept film, set in an isolated community in the UK with a working title of Forever Dark. We’ve had a lot of interest in both of these movies and simply cannot wait to get out on location again and continue our passion for horror cinema.”