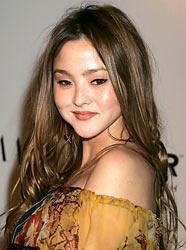 The extraordinarily beautiful Devon Aoki (she is part-German, part-English, part-Japanese, born in New York) first came to most movie fans’ attention in Frank Miller’s uber-stylish Sin City. I spoke with her on the set of Mutant Chronicles in June 2006.

Tell me about your character in this film.
"I play Duval. She’s a soldier for the Mishima army. She’s a mother of two very young children. And she’s, like the rest of the soldiers, given her life in trade for two tickets which she gave to her two children. So this mission for her, she acknowledges and realises that the chances of survival are slim but obviously this mission is so important so she’s really committed."

What attracted you to this role?
"I thought the whole project sounded like a lot of fun. We have a really great cast and that was one of the reasons why I was really gung-ho to come out here and do this film. The actors that we’re working with here are really respected and bring so much to the project. Also, for Simon Hunter this project has been pretty much a long-term commitment. He’s been working on this for quite a few years now, trying to get it off the ground. So I figured that someone who’s so committed to a project, it’s bound to come out well, hopefully! And lastly Ed Pressman, being the main producer on this film. He’s done hundreds of films now and he’s very respected so obviously that was a huge draw. Other than that, as far as the story’s concerned, I hadn’t played a soldier like this before. I’d played ninjas and assassins and various different other characters so this was something completely different for me, which is why I accepted the role, because I wanted to be able to try something new."

Have you got fight scenes and action scenes?

"Yes, I have some fight scenes. I have this big gun that’s basically at the beginning my main weapon of choice, then when I lose it I have to rely on my sword and my fighting skills. So she’s not necessarily a ninja at all, she just like a dirty fighter. Severian has two swords and is more trained in a martial arts form; my character has been in the trenches and it’s more like street-fighting."

Have you had to do any special, extra training for this?
"We’re doing some training when we get to the Isle of Man but mainly I guess we’re going to choreograph the scenes and learn them after training for a few days. As far as the street-fighting stuff, I have four brothers and four sisters so I know some dirty moves myself!"

I’ve been asking all the actors who they’re coping with the green-screen stuff, but having done Sin City you must be thinking there’s actually a lot of set here.
"Actually, I have been thinking that: there is an awful lot of set here. Because when I was working on Sin City it was literally just green-screen and green ground too. Here we have rocks and things to get us into the mindset of where we’re at. Last week we shot in a military transport and they actually constructed this transport. We were also in a pod and they constructed that. So it’s not as bare bones as some things are and it sure helps a lot." 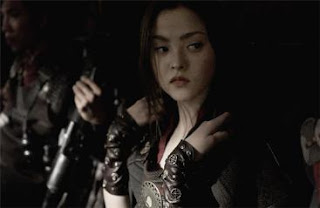 But it must be an advantage to you that you’re experienced in green-screen work.
"I’m pretty familiar with it. Obviously it’s different than working on an actual set where right in the distance there are mountains or whatever it is. A lot of the times our eye-line is just to the green so a lot of the time you just have to imagine what’s going to be there. We’ve seen pictures. So it’s more about trying to construct in your mind what’s around you. Where are the streets? Where are the buildings?"

What’s next for you?
"I’m actually working on my own jean-line so that’s important now because I’m trying to get that off the ground. And I go right into doing commercials for that, mainly for Asia. Filmwise there’s some possibilities but nothing that’s confirmed yet.”